“What I was feeling for A*** needed its own embodiment; the pleasure I took in A***’s company demanded is own fulfillment. I wanted A***, it was true, and all my other desires, needs, and plans paled in comparison. Suddenly, the obsessive clamor for amorous possession took hold of me.
I was surprised to find myself desiring, painfully. In a sudden rush of vertigo, I was tantalized by the idea of contact with A***’s skin.”

What we have here is the impassioned confession of the unnamed narrator of Sphinx by Anne Garréta. A*** is the object of this sudden and intense desire. Neither are defined by sex or gender. This factor, acts as a constraint that places this French novel within the ranks of the works of the OuLiPo group of authors (though,written in 1986, it predates the author’s admission to this famed group). Yet in the end, Sphinx requires no such designation to work as a powerful literary, darkly existential meditation on memory, attraction and identity. 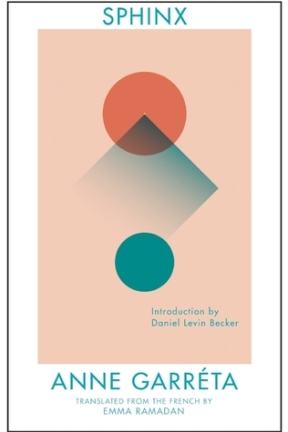 The more I heard about this book, a new release from Deep Vellum Publishing, the more conflicted I felt about whether or not it was something I wanted to read. My reasons for that uncertainty are deep seated and will be discussed below, but let’s get one thing out of the way first… Sphinx is one stunning, dynamic and important novel. To finally have it available in English, and in a world in which the public understanding of sex and gender is evolving, serves as an invitation to approach this work as more than either a literary challenge in itself or a polemic of feminist/queer theory.

Oh, wait a minute. Is it a good story? One that stands on its own merits? At first blush, the set up sounds, and at points may even feel artificial, but that oddness passes quickly. The narrator is a young student of Catholic theology who is drifting without strong direction and, through a series of unusual, even disturbing, coincidences ends up working as a DJ at an after hours Paris nightclub. This serves as an introduction to a new world, an alternate reality that opens late at night, to unwind in the very early hours of the morning. Our narrator demonstrates a tangible ambivalence toward this radical change of lifestyle.

“I acquiesced to whatever presented itself without much arm-twisting, and I neither suffered from nor reveled in it: I was spared the exhaustion of searching and seizing. I was giving up a state of being that was in turn abandoning me and sliding into another that slowly, imperceptibly came to envelop me.”

In learning to navigate this world, an identity that may or may not be valid or true, is adopted to serve as a barrier, a means of mediating an alien environment. Within this identity a certain boundary, a sober vantage point is maintained until A***, an exotic dancer at a strip club, comes into the narrator’s life. At first their friendship is platonic, existing in a stylish public sphere. The narrator realizes it is not built on strong romantic or intellectual engagement. The attraction is one of opposites – race and personality – until sexual desire arises abruptly, throwing the narrator’s carefully constructed identity into a crisis which is heightened as A*** initially refuses to take their relationship to an intimate level.

When it is ultimately consummated, a highly charged sexual and romantic liaison develops, enduring several years marked by turns of passion, jealousy and domesticity. As might be anticipated in a union built on obsession rather than common interests, cracks and fissures begin to grow. This is heightened as the narrator seeks to revive abandoned theological pursuits, carving out time to focus on an essay, quite fittingly, on the apophatic tradition – the attempt to describe God only by negation. Later on, after the tragic end of this ill-fated love affair, the narrator will sink into a deeply existential rumination on love and loss. No sexual encounter, romance, intellectual or academic pursuit will fill the void left behind. A restless wandering overtakes our hero, driving a spiral into ever darker self exploration. Without the “other” as a frame of reference, it becomes increasingly evident that the self is isolated, disconnected.

“Had I confided more in A*** than in anybody else? What had I revealed? Had I unmasked myself? No, more likely I had exposed my own collapse, the ruin of the edifice I had so painfully constructed out of rhetoric and made to stand for an identity.”

At heart this is a novel of obsession, of memory, of mourning. The language is rich and sensual, with an intensity that is visceral and emotionally powerful. For that alone, Sphinx is a work worth attention.

But what about the matter of sex and gender?

I suppose it will come down to how important it is to have a fixed image of the protagonists in your mind as a reader and how fluid your conception of gender is in relation to sex and sexuality. Are they bound together, or three separate aspects of identity? For the majority of people, biological sex conforms to gender identity. They are experienced as one and the same. Sexuality hinges on the sex and gender of the persons to whom one is attracted. Transgender is an umbrella term for those for whom sex and gender do not fit exactly. The range of gender expressions, identities and bodies under that umbrella is wide and the intersection with sexuality can further complicate the issue. Queer theory aside, a novel like Sphinx opens up the potential for a completely free reading experience. One can choose gender, sex and sexuality as desired, play with alternatives in the reading, or re-encounter the work with repeatedly different contexts. Garréta has incorporated enough ambiguity to open up all possibilities. The decadence of club life is contrasted with the sober pursuits of the serious intellectual and blended with domestic engagement and the dynamics of extended family.

For a queer reader like myself it is a glorious opportunity, one I would have loved to encounter back in my isolated teenage years. Even into my 20’s and 30’s as I sought to make sense of a physically gendered space that felt fragile and ungrounded at its core, distorted and confused by my ostensible sexual orientation. Now in my 50’s, 15 years after transitioning, Sphinx speaks to me on yet another level. I can and have easily existed in the world as a gay transgender man without outing myself on either count unless I chose to (like I am at the moment). I am invisible not only online but in the real world. Yet the challenge arises in the building of close and honest relationships with others. I cannot talk about my past, my marriage, my subsequent affairs without resorting to a vagueness, to the construction of a gender neutral self-imposed witness protection program. If I am sexually attracted to someone an entirely different level of discussion is required. Coming out is a constant and continual process. Sometimes it is easier to retreat. And while English does not create as much difficulty for the moments in literature or life when genderlessness is preferred as French, a recent conversation with a young gay man from Mexico who is not out brought home to me the more profound challenges of a Spanish speaker who cannot even talk about a “partner” or “friend” without indicating gender!

I do not believe that the loneliness and ennui that seep into the narrator’s very marrow as Sphinx progresses are unique to queer experience. We all long for human contact and when you find yourself single when you had not expected to be alone, it becomes easy to imagine yourself undesirable, to berate yourself for not making the most of moments or opportunities that may be past, or seek fleeting satisfaction in meaningless encounters or distractions. However, the arrival of this novel at a moment when discussions and awareness of identity and sexuality have progressed well beyond where they were almost 30 years ago, is especially timely and exciting.

The anxiety with which I approached Sphinx was admittedly specific to my personal life history. I have been routinely disheartened by the way matters of sex and gender are presented in literature. I suspect that the author’s theoretical grounding would diverge from mine, but there is not, as I had feared, a perceivable political agenda that interfered in any way with my full enjoyment of this book. Thanks to a fellow blogger (Tony Malone) who challenged me in what was, in my time zone, a late night twitter conversation to give Sphinx a read – believe it or not it was his nod to Camus that sold me – I have become an enthusiastic supporter. I am writing this before I see his review but I am certain he will cover other angles.

Thank you to Deep Vellum for bringing this important work to an English language audience. Emma Ramadan’s translation is most wonderful. As she describes in her afterward, Garréta was forced to employ a great deal of ingenuity and creativity to avoid revealing the narrator’s gender. In English genderless narrators are not unique. A*** has to be presented with more care and less depth. But that is in keeping with the narrator’s own lack of understanding of A***. It all falls together beautifully with an intensity which is meditative, unsettling and, at times, deeply moving.

21 thoughts on “How do you see me, anyway? Sphinx by Anne Garréta”