It could be argued that the celebrated cities of the world – Rome, Paris, Vienna and others – owe their mystique to words of the poets who have walked their streets. But what of the humble, disregarded metropolises, where are their voices to be found? For Czech writer Pavel Brycz, his own love/hate relationship with the city in which he grew up inspired him to wonder how he might access the beating heart of a place more associated with crime and unemployment than romance. He decided to give the voice to the city itself, allow the city to express its affection for the souls residing within its boundaries, and the result, I City, is a work of melancholy tenderness. 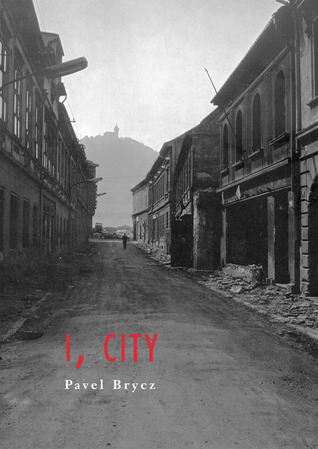 Most is a city with medieval roots in the northwest region of the Czech Republic. Situated in the middle of the lignite mining region of Northern Bohemia, this fated urban centre has, since the mid 20th century, been associated with industrial development, pollution, environmental degradation, and the social problems that often percolate in similar communities. During the 1960’s, under the Communist government of the day, the historical old town was demolished to allow greater access to the lignite deposits lying beneath its foundations. Remarkably to preserve the late Gothic Church of the Assumption of the Virgin Mary, dating from the 1500’s, the entire building was physically relocated 841 metres, a painstaking process involving 53 transport trucks set on special rails. Meanwhile, rows of uninspired housing constructed of prefabricated concrete panels were erected to house the relocated residents and the new workers who began to flood into the area. The personified city frames this event as indicative of its own nomadic spirit:

“Mine is a migratory soul. And one day you’ll wake up, and you’ll be somewhere totally different than you are today:
You’ve already experienced it once. Don’t you remember?
You looked on in astonishment as the church rode away.
Where does our faith ride? In which direction is our lack of faith headed?
To heaven or to hell, which is the destination of our future? Shhh…
Once before you watched the church slowly going, and the birds were off to the south.
You didn’t know what was behind it. Now, I’ll reveal it to you: I, city, unhappily, happy, hitched up invisible horses and dreamt of a promised land. And I dream about it still, incessantly.”

Through a series of “appearances” – short stories, fragments, prose poems – the city of Most tells its own history, through the stories of its children, young and old alike. And because it was leveled and rebuilt, these are timely, modern stories told with the magic of folktales. There are touching stories of love – kindled, sundered, missed by coincidence. There are the vagaries of youth – from the poetic angst of teenagers to the dreams of hockey glory in far off Canada. There are heartbreaking stories of the lost who return home, like that of the young woman who arrives on her parents’ doorstep after years of living rough in Prague and is welcomed without question; and of the lost who are lost for good, like the solemn lament for the young man whose mean life was cut short:

“He needed wings. He needed to wave at the world from high altitude. Now he’s gone. He sniffed Čikuli stain remover and flew off far away from me, though he lies dead on one of my streets. I, city, don’t know how to shed tears. Because of one boy, the rain won’t fall from the sky.”

The city, as narrator, loves its people, and, as such brings to life a place that is more than its industrial setting might reveal. Kafka, Pope John Paul II and other historical personages make fictional appearances, but it is the common person, the unadorned life, that gives the inanimate entity its pulse. Bohumil Hrabal, one of Brycz’s literary heroes comes to mind here, as his work likewise celebrated the lives of ordinary people.

For all the mixed emotions we often hold for the very places that shape us, Brycz has, in this unique novel, a created a city worth loving because it cares about its own, even if it is helpless to protect or change the fate of any one its citizens. It can only watch, listen and, at times, sit along side them:

“I am a city. I’m full of people. Nothing human is strange to me. I love people. But not because they are great.
I love them because they are small.
There are a lot of them, and they’re all lonesome.
Fettered, they yearn for freedom. They pray for immortality, and yet they don’t survive the touch of death, the Medusa jellyfish. They thought up money and they eternally lack it.
They explained their dreams and then they took sleeping pills.”

I, City, translated by Joshua Cohen and Markéta Hofmeisterová, is published by Twisted Spoon Press.

14 thoughts on “Through my people you shall know me: I, City by Pavel Brycz”