My father was born on this day, April 26, in 1928. Marking his birthday for the first time since his death last July is bittersweet. My father was a difficult man, he rarely played with us or talked about his childhood—I would not even begin to appreciate why he was this way until I was in my 40s—but he gave me my love of literature. He would regularly run out on Christmas Eve and bring home books especially for me, starting me early on children’s abridged classics: Hans Brinker, Treasure Island, The three Musketeers and my very favourite, Tales of King Arthur and His Knights of the Round Table. I have spent the past few months combing through his library as we clear out our parents’ house. I selected the books that were suitable for donation to charity, decided which were not worth saving, and brought home the books I could not part with. 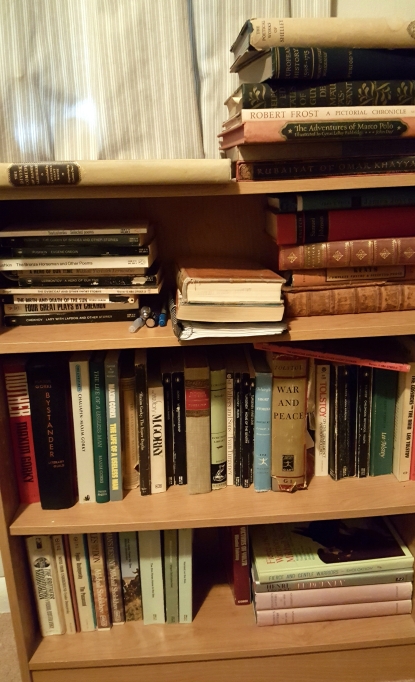 My father loved history, poetry and Russian literature. Much of the poetry I had already acquired, piece by piece, over the years; the war history will, I’m confident, find new homes; and I saved for myself his Russian lit (more Gorky than I expected) and his fancy editions of Western literary classics. I have gathered his Russian collection on a small shelf in my office and hope to salvage language from these books to create an experimental composition in his memory. But, as I made my way through his library, I found a few little treasures that speak to his years in New York City in the 1950s—a magical time he was forever trying to get back, long after that New York was gone.

He was in his early 30s when he was finally able to attend university. His parents were not supportive of academic pursuits. He studied electrical engineering and would never complete his degree for lack of funds, but while he was at Columbia his great joy was to write for the student newspaper. He reviewed opera and concerts. He would have been well suited to the life of an academic if he had had the support to take an Arts degree. But that was not to be although he would go on to be a highly respected, if difficult, electrical designer and contractor. Among his books I found a program of concerts from 1950–51, along with a charming contest entry for a chance to win an “Easter outfit,” and a couple of mini pamphlets of “The Raven” and “Annabel Lee” (the last book he gave me a few years back was a complete collection of Poe’s poetry and prose). 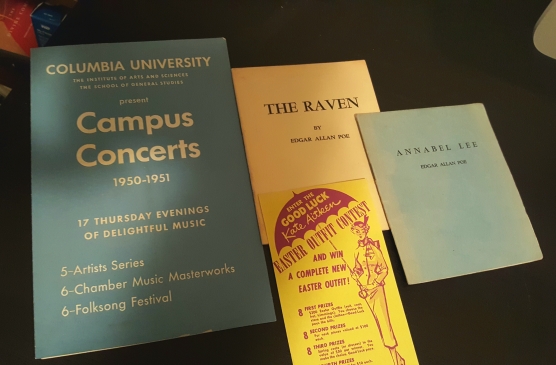 The process of sorting through my father’s books, left me with a clear image of him haunting secondhand bookstores throughout his life. My favourite find was a copy of a red hardcover called Modern European History by Charles Downer Hazen. Published in 1917, the first owner left his name inside the cover. I don’t know who accidentally burned through the binding, but my father left calculations inside the back cover—not simply solving math problems, it looks like he was tracking the number of pages he was reading.

My father had a thing for numbers, he tracked the temperature and the stock market figures every day right through to the end—not so much out of an interest in the markets as far as I know—but as a little bit of mental exercise. He was afraid of dying and even more afraid of mental decline. I’ll have to keep counting for him. Today he would have turned 89.