At the heart of Puccini’s final opera, Turandot, is a series of riddles which the ice princess presents to Prince Calaf, her eager suitor. Any wrong answer would mean death. When his successful solutions fail to win her affection, he counters with a riddle of his own. And his is a wager with an equally high risk. He tells her that if she can correctly discover his name by the following day, he will die at daybreak. It is perhaps no coincidence, then, that The Tragic Fate of Moritz Tóth, a novel in which Turandot plays a pivotal role, seems to unfold as a number of riddles—or situations that are difficult to explain—that serve to lead and mislead the characters, and the reader, along the way. 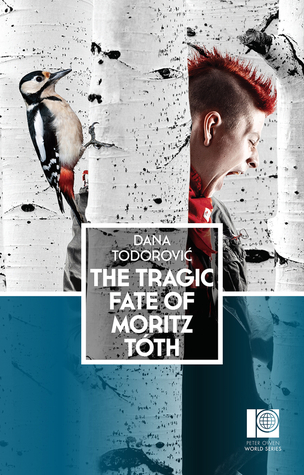 This short but ambitious novel by Serbian writer Dana Todorović, is one of the new titles in the third round of the Peter Owen World Series, published in collaboration with Istros Books. By employing two stylistically different, but interconnected storylines, Todorović crafts an accessible, inventive exploration of a number of classic literary themes: the nature of good and evil, predestination versus freewill, the redemptive power of art, and the soullessness of modern bureaucratic society. The result is an entertaining, thoughtful read, with a twist that few are likely to see coming.

The titular Moritz Tóth narrates his own story. He is a former punk rocker with a tendency to moody melodrama, at a loss following the death of a woman he had loved. He has been though some rough stretches and his past will leak out in erratic confessions over time, but at the outset he is simply in need of a job. When the employment agency calls, he has little option but to answer. And so this most unlikely candidate ends up as a prompter for a forgetful Calaf in a run of Turandot at the Hungarian State Opera House in Budapest. However, Moritz’s first exposure to opera reawakens in him a long forgotten passion for the violin. As a child he had fiddled Gypsy tunes with his musician grandfather until, in the throes of adolescent rebellion, he had traded his violin for an electric guitar and turned his attention to punk.

The second storyline, narrated in third person, has a more directly fantastical and allegorical quality. Tobias Keller, Adviser for Moral Issues with the Office of the Great Overseer has been summoned to appear before a Disciplinary Committee. Against the codified regulations of this bureaucratic version of heaven, Tobias has been charged with engaging his own freewill in an attempt to influence the circumstances of an individual whose activities he was monitoring. To have acted without following protocol and obtaining permission from above, may well cost him his job. He is accused of triggering a sequence of events designed to involve an intermediary to exert an influence on his subject—one Moritz Tóth. But Tobias has no regrets. He is proud of the outcome, even if, in the end, it actually meant following his own beliefs and defying the norms of the celestial bureaucracy in which he was expected to function. He tells the committee:

‘In my youth, while on a perpetual search for new knowledge and insight, I would often wonder if there was a straw we humans could grasp at to give meaning to our lives, considering that we are deprived of the ability to penetrate the truths of our existence.

‘Then I realized that it all comes down to conviction, or faith, if you will, with which methods of reason share no common ground. And my convictions tell me that if we exclude factors over which humans clearly have no influence, such as the laws of nature, if we exclude situations in which the human being is physically prevented from acting upon their will, then it would be far more beneficial for the human race if each of its members carried within themselves the awareness of the freedom to choose as a birthright, or if they prefer, an inherited burden on their shoulders.’

The two narratives alternate, chapter by chapter Tobias faces repeated challenges against his impulsive action in a system in which honourable intentions appear to have no value, while Moritz becomes aware of a strange character who seems to be following him. This creature’s presence and the appearance of a number of signs that seem to hold prophetic significance, deepen his paranoia and anxiety. As he attempts to solve the chain of riddles confronting him, he begins to suspect he’s the victim of a diabolical plot of Biblical proportions. His wild imagination gets the better of him, threatening his rational judgement altogether. But, what is the true connection, if any, between Tobias’ action and the increasingly strange circumstances in which our hapless former punk has found himself?

The exact nature of the connection remains unclear until the closing pages. Todorović manages to build a complex plot that raises some very profound questions, and present them in an original context. This is, however, a first novel and translated by the author herself. It is impossible to know how much the language might be, in such a circumstance, altered for an English speaking audience. It is worth noting that the narrative can, at times, get weighed down by awkward transitions and clichéd metaphors and similes. It is not enough to detract from what is a highly engaging tale, but it can occasionally strike a sour note.

Ultimately, the real charm of The Tragic Fate of Mortiz Tóth lies in the riddles posed, reminding us, as Ralph Waldo Emerson famously advised: “Life is a succession of lessons which must be lived to be understood. All is riddle, and the key to a riddle is another riddle.”

The Tragic Fate of Mortiz Tóth by Dana Todorović is translated by the author and published as part of the Peter Owen World Series: Serbia, a collaboration between Peter Owen Publishers and Istros Books.

3 thoughts on “All is riddle: The Tragic Fate of Moritz Tóth by Dana Todorović”