If absence makes the heart grow stronger, absence tinged with the uncertainty of love returned can lead the heart and the imagination to wander into realms beyond the merely mortal. To contemplate romantic perfection. To be filled with a longing for something that may no longer exist. To attempt to counter the earthly with the heavenly. To trust in angels. 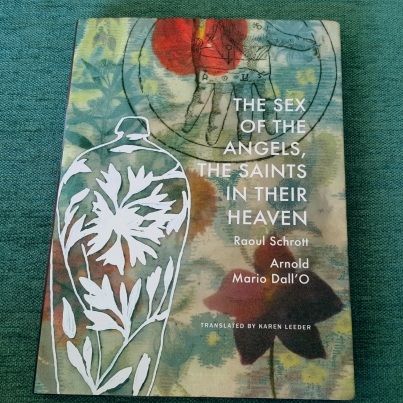 The wonderfully titled The Sex of the Angels, The Saints in their Heaven is essentially a series of missives from a lovelorn poet to a mysterious red-haired beauty from whom he has been separated by time, distance and, perhaps, some recklessness on his part. He is writing from County Cork in the south of Ireland, a place which is not his home, where he is exiled, or has exiled himself, sending into the nightly blackness a chain of love letters ever so loosely disguised as a sensual, passionate and mildly profane angelology accompanied by miniaturized hagiographies. Originally published in German in 2001, this extraordinary work by Austrian writer Raoul Schrott, with its arresting illustrations by Italian artist Arnold Mario Dall’O, is now available from the inimitable Seagull Books in Karen Leeder’s delicately rendered translation. Fictional, but not a conventional novel, essayistic, but meditative in style, this book is an engaging blend of philosophy, mythology, the classical sciences, saintly heroism, and earthbound human romantic longing.

Our narrator begins, as one would expect, with Dionysius the Areopagite—not the saint, but the fifth century Syrian Neoplatonist who, writing in the name and style of his sanctified predecessor was the first to craft a hierarchy of angels and demons, a celestial stepladder to God for dark times.  Within Pseudo-Dionysius’ model of an angel-sustained universe, he locates himself and his own angelic entity:

For Earth he chose only a single one, which he placed in the lower arc of my ribs where I can feel it now, hard as a little planet. I carry it with me (even now in the train it keeps to its orbit) and sometimes I can see it before me: its mouth, black brows and a storm of red hair over its freckles, an incarnation of St. Elmo’s fire.

Captive and captivated, he writes as if possessed, bringing the Aurora Borealis, Samuel Johnson, Greek and Babylonian mythology and more into his musings as he tries to make sense of his fate, this spell of infatuation under which he is labouring. His thoughts never stray far from his beloved even though his letters have yet to elicit a response. He is continues his conversation into the silence, remembering their moments together. It is not entirely clear how much he really has to build on, how much they ever had, a quality that amplifies the sense of yearning:

Then as I sat next to you in the great hall, I heard you more than saw you beside me; I listened to you; wings folding shut. Do I bore you with all these sophistries and sentimentalities? It is only because the post takes so damned long, because I don’t know whether you will ever respond, not how; because I must eke out the little that I have to create a picture of you: little stones for a mosaic. The angels help me lay it out. 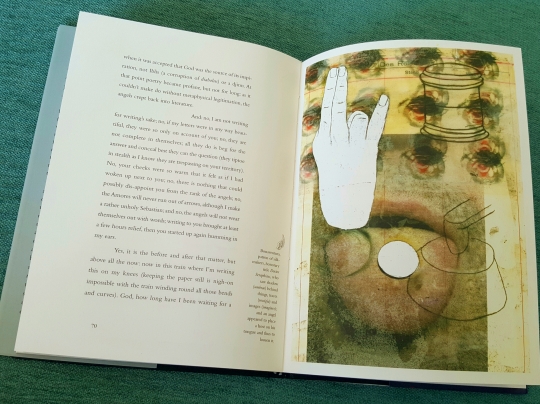 As he wanders the past and waits in the present, meditating on the nature of the role of angels in the affairs of humans, especially his own, our poet paints an image of a windswept remoteness, an isolation actual and emotional. He references local towns, harbours and natural features, like the aptly named Mount Gabriel. The ocean is never far away, and water is a major presence in his memories, his sense of loss, and much of the mythology he calls on. His heartache is pervasive, and achingly beautiful:

I walk through the grass; it brushes against my shoes. All is still, and I wish your voice was with me now, whispered and low so that only I could hear it. Instead the moon starts off on a soliloquy. Where it stands, stubbornly apart, is the southwest and somewhere behind is where you are, as if only I had to concentrate to see that far, peer over the curvature of the earth. But where you are it is an hour later, I only wish I knew how to catch up that hour.

Because the distance that haunts him is temporal, in more than one sense of the word, trusting the angels, even if as he admits, he does not believe in them, has a certain logic. A comfort. 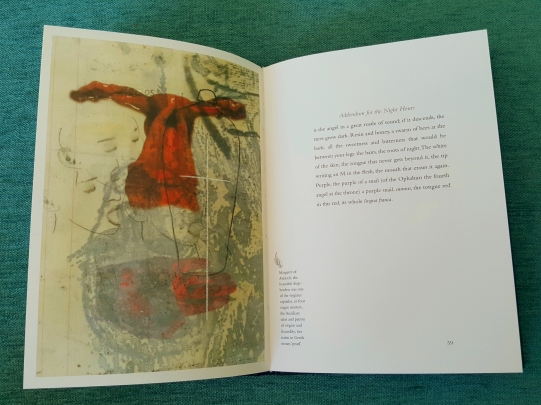 Turning to John Scotus Eriugena, the ninth century Irish theologian, best known for translating and commenting on Pseudo-Dionysius, the narrator reflects on the inverted balance existing between humans and their heavenly counterparts:

the angel finds its form within humankind through the spirit (intellectus) of the angel that is in the man; and man comes into being in the angel through the spirit of humankind within him and so on and so forth for all eternity without a single Amen being granted to us in Eriugenia’s scholastic permutations. We are nothing but the imaginings of angels; and angels exist only in our thoughts: that is our paradox not theirs.

He has entrusted his love and his beloved to the care of angels, to hold her for him in their thoughts. And yet, as her own distinction from the angels becomes less clear in his letters, one has to wonder how much she has begun to exist only in his thoughts. If she, in her epistolary silence is possibly not thinking of him, what existential questions does that raise? For him? For any of us who has ever loved hopelessly another who will never return our affection? At heart, he knows, it seems.

And: no, I am not writing for writing’s sake; no, if my letters were in any way beautiful, there were so only on account of you; no, they are not complete in themselves; all they do is beg for the answer and conceal best they can the question (they tiptoe in stealth as I know they are trespassing on your territory). No, your cheeks were so warm that it felt as if I could have woken up next to you; no, there is nothing that could possibly dis-appoint you from the rank of the angels; no, the Amores will never run out of arrows, although I make a rather unholy Sebastian; and no, the angels will not wear themselves out with words; writing to you brought at least a few hours relief, then you started up again humming in my ears.

The Sex of the Angels, The Saints in Their Heavens reads like an extended meditative conversational prose poem, a playful interplay between earth and the heavens, grounded in the inescapable humanness of romantic love. The rich illustrations and micro biographies of the lives and martyrdom of the saints accompanying the text work together to form a running commentary on the interrelationship between love, spirituality, literature and art. This book could almost be, if one didn’t know better, the work of the angels themselves.

2 thoughts on “Summoning the celestial: The Sex of the Angels, The Saints in their Heaven by Raoul Schrott”