The damaged hero of Italian author Diego Marani’s first novel New Finnish Grammar, which was originally published in 2000, but only released in English in 2011 (translated by Judith Landry), is a mystery to himself and to those who find him. World War II is raging, when a badly beaten man is found on a dock in Trieste with no clue to his identification beyond a Finnish name sown into the collar of the naval jacket he wears. When emerges from a coma with, what would presumably be a severe traumatic brain injury, he has no memory and no ability to use language. He does know who he is or where he comes from but, by coincidence, the doctor who attends to him is a Finnish-German who has never overcome his own longing for his homeland. He becomes convinced that the best medicine for his amnesiac patient is to send him to Finland so that he can connect with what is assumed to be his land and language, and in doing so, retrieve the past that has escaped him. 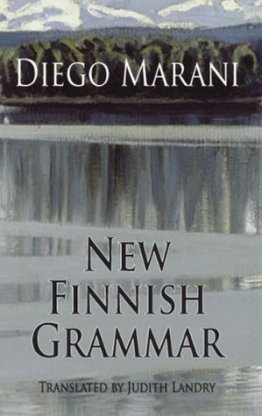 As much as I wanted to love this book, this is where I started to have problems. Firstly, the storytelling approach is awkward. It is the doctor who takes on the task of
curating a selection of notebooks, journal entries and letters belonging to “Sampo”, our erstwhile Finnish patient, to both honour him and make amends. He frames and fills in the tale with his own reflections, corrections and assumptions. Somehow, we are asked to believe that a man with a brain injury severe enough to trigger such a complete loss of memory and language could manage to develop sufficient facility in a notoriously complex language to be able to report his earliest memories post injury, or even find his way around a strange city. Yes, his mastery of the language is never comfortable, he relies on his notebook and endless practice, and he is emotionally lost and eventually unable to find a grounding or the past he seeks. Meanwhile, the language and mythology of Finland were clearly chosen by the Italian linguist author as a template for the exploration of memory and identity, but I could just not suspend disbelief long enough to fully surrender myself to the story.

This is not to imply that there are not breathtaking moments in this novel. There is a heartbreaking sadness and loneliness that haunts our dislocated hero. As war closes in around him, he is the walking wounded, an invisible casualty in a place to which he so desperately wants to belong. But my practical side, the side that spent the last decade working with real survivors of traumatic and acquired brain injury, could not let go of the idea that the main character’s overall functionality did not mesh with his complete loss of identity and language. The assumption is that his memory loss is psychological in nature and that the return of language will release it. In reality though, his injuries would indicate traumatic causes and with such severe long term memory loss some elements would still typically remain intact, while short term memory would be greatly impacted hindering his ability to learn new things easily. A complicated “new” language? I find that especially hard to accept.

I suppose I will have to admit that I am not the ideal reader for this book. I don’t regret reading it and I am sure that there are moments that will continue to linger. Memory is one of the most fertile landscapes for a writer to explore. Even without the added impact of illness or injury, memory is a fleeting, nebulous and fundamentally subjective phenomenon. However, I opened New Finnish Grammar with too much experience with brain injury to fully appreciate the work. And, for that matter, I could not help but wonder how a reader with too much native experience with Finnish language and mythology would respond. Perhaps with an equivalent amount of skepticism.

3 thoughts on “The fiction of remembering, the realities of forgetting: New Finnish Grammar by Diego Marani”