“Lives are meant to be separate and apart; when the borders break and we overflow into one another, it only leads to trouble and sadness.”

Last month I had worried about easing back into reading following my recent unexpected cardiac arrest, but, in fact, August went well. September has proved much more difficult. I have picked up so many books I thought I wanted to read only to be unable to get beyond a few pages. So it is probably no surprise that I retreated to the comfort zone of re-reading a book by one of my favourite authors. I chose this book on the expectation that a new paper edition was due to be released today in Canada but from reports of the distributor being low or out of stock, the reality of actually seeing it on the shelves may be a long way out. Too bad because when you know a writer has many excellent books to his or her credit it is a shame to see only one, the latest or best known, in stock. Fortunately this title is readily available electronically. 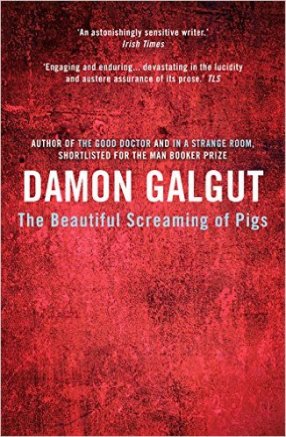 The Beautiful Screaming of Pigs is the second full length novel by South African writer Damon Galgut. Originally released in 1991 it eventually dropped out of print and, when a new edition was issued in 2005 following the Booker shortlisting of The Good Doctor, Galgut took the opportunity to revise the book, wanting to address his longstanding feeling that the rhythms of the language sounded “discordant”. The result, for whatever it is worth, is a novel that embedded itself into my consciousness with the first reading, and proved to be even richer and more deeply affecting with the second.

Set against the backdrop of the first free elections in Namibia in 1989, 20 year-old Patrick Winter and his mother are heading to the land that he had, only a year before, been fighting for on behalf of the South African Army. That experience has clearly left him emotionally traumatized. He is dependent on Valium to sleep and cope with recurring panic attacks. For his mother the trip is an opportunity to visit her young black lover, the latest of a long string personal explorations she has flirted with since her divorce from Patrick’s father. As the story unfolds he will reflect on his childhood, the horror of his time in the army, his ambiguous feelings about his own politics, and the emerging recognition of the nature his sexuality.

The novel opens as Patrick and his mother arrive at the Afrikaner farm where she grew up and he spent many a summer vacation. His brittle grandmother fusses over his physical and mental health, cannot understand why they are heading north, and stubbornly insists on referring to Namibia as South West Africa, the name by which it was known going back to its years as a German colony. Here Patrick will begin to reveal his family background, his closeness to his mother and his alienation from his rugged, athletic, big game-hunting father and older brother.

When his brother Malcolm joins the army and is killed in a motor vehicle accident, the loss tears the fragile family apart. Patrick and his mother move out, unraveling the tightly wound expectations of marriage by which she had been bound. As she tries to reframe herself with a series of dramatic passions and obsessions, her son is placed in the awkward role of picking up the pieces behind her. So when his own obligation to the army arises, despite the sure knowledge that he is entirely unsuited for the task at hand, he enlists promptly hoping to get his two year commitment out of the way. He won’t last two years, nor will he be able to put the experience behind him.

As he awakes that first morning to a familiar noise on the farm he makes a striking observation about his state of well-being in an unforgettable passage. Outside a pig is being slaughtered:

“There is no sound on earth like the sound of a pig dying. It is a shriek that tears at the primal, unconscious mind. It is the noise of babies being abandoned, of women being taken by force, of the hinges of the world tearing loose. The screaming starts from the moment the pig is seized, as if it knows what is about to happen. The pig squeals and cries, it defecates in terror, but nothing will stop its life converging to a zero on the point of that thin metal stick.”

As a child, the spectacle of a pig being killed never failed to draw him with a fascinated horror. On this day his reaction takes on a different note:

“It was a sign of my state of mind or soul that on this particular morning the screaming of the pig sounded almost beautiful to me. It didn’t evoke violence or fear, but a train of gentle childhood memories.”

After the reverie of a walk around the farm and a hearty breakfast, Patrick and his mother head for Namibia. When they finally reach Windhoek and meet Godfrey in the township where he lives, Patrick is surprised to find that his mother’s lover is not quite what he had imagined and is, in reality, only a few years older than he is. They learn that a white activist who had been working with SWAPO (the South West African Peoples’ Organization) has just been assassinated and Godfrey must attend to details for his funeral and an election rally. This necessitates a further trip on to Swakopmund, a detour that places Patrick in a position to question his own political resolution and bravery, especially poignant in light of the fact that on the border he was engaged in fighting the very forces he is now helping Godfrey support. His mother’s enthusiasm soon wanes into boredom as, for her, the shine starts to come off her latest passion.

Woven into the account of their few days in Namibia, is Patrick’s chronicle of his experiences in the army, beginning with the early days of tedium as the young soldiers pass empty days in their tents “playing cards, writing letters, telling jokes. An old scene, as old as the first village.” Patrick is keenly aware that he does not quite fit into this world of testosterone charged energy. He is hopelessly reminded of the way he felt sidelined as his father and brother tossed a rugby ball on the lawn or boasted about their hunting conquests. He senses a brotherhood of men to which he will never belong. It is not until a young Afrikaner named Lappies arrives that he finds a kindred spirit, makes a friend, and maybe – although he doesn’t realize it at the time – falls in love. Once fighting descends on the camp and strikes with a vengeance; horror, fear and death take their toll. When Patrick’s friend is killed, his grasp on sanity begins to slip. Galgut pulls the reader right into his young narrator’s shattered mind in one of the most intense descriptions of a mental breakdown I have ever read. It happens in fits and starts. Patrick tries to hang on, stubbornly, foolishly until his condition deteriorates to the point that he finds himself hospitalized, first in Pretoria and then in Cape Town. He is discharged from the army.

In the hospital his parents visit. Their responses to their shocked and emotionally injured son are true to form. His father travels to see him Pretoria where he sits awkwardly, shifting from ”buttock to buttock” unable to find anything meaningful to say. His mother has been busy acting in a play and does not make her appearance at his bedside until he is back in Cape Town. She visits him daily and talks about herself. It is here that she will first tell him about Godfrey, hoping to impress or shock him. He has no answer but he remembers the small drama.

“At that moment a shaft of light, blued by the rain, fell on her face: like the actress she was, she turned towards it, finding her spot. Then she smiled, and the smile became a laugh: a round, silvery sound, like a coin, which fell from her throat and tinkled down onto the ground.”

Patrick’s few days in Namibia will not answer all the questions he carries into the shifting sands of the desert one year after his breakdown. But he will emerge from the visit with a sense that it is time for him to define his own sense of personal space and figure out who he is. Borders – those lines between countries defended by force, defined by politics, and blurred between people – feature throughout this novel. True to form, Galgut allows these spaces to exist for the reader to explore. He is a writer of remarkable restraint, a storyteller who matches spare tight prose with simple moments of vivid intensity. In The Beautiful Screaming of Pigs he has created a haunting, intelligent, unforgettable portrait of the relationships between people at a time of great upheaval and impending change in Southern Africa. As Namibians queue with excitement to mark their ballot toward the end of the novel, Godfrey tell Patrick that maybe someday his own country will see the same. That day will still be more than four years away.

22 thoughts on “Other kinds of exile: The Beautiful Screaming of Pigs by Damon Galgut”