“New Year’s Day on the sofa. I folded my life in on itself, seven times. The last few folds only bent. I was surprised it was so bulky.”

The cover of the book is simple. Pale yellow lettering across the horizon that separates a gray sky from the gray waters below. Vertigo. Joanna Walsh. Inside fourteen stories, elemental evocations of a woman’s existence, from the gently dissected vantage point of early mid-life, rolling out, reflecting back on one another, like waves lapping up against the shore. Emerging from the waters as the book draws to close, it is difficult to find words to encapsulate the experience of encountering this work. 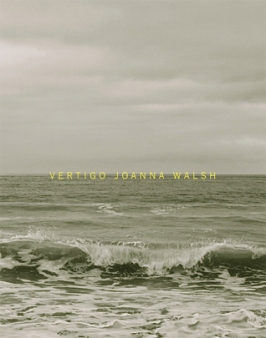 Throughout this spare collection, Walsh demonstrates a stunning ability to pinpoint the imperceptible, bring it to the surface and spin a story around it. Her narrators, who may or may not all be the same woman, perseverate, observe, double check and doubt themselves. They are acutely aware of their bodies: bodies that are aging. They are aware of their clothes, of how their clothes fit, how they arrange their legs, if the man at the next table has noticed their legs. They turn their focus inward to the very act of breathing – in, out, or barely breathing at all. They are mothers, they are wives, they are ex-wives, they are daughters. Perspectives shift, sometimes even within the frame of the same story.

The title story, “Vertigo”, is the account of a family vacation. The narrator, her husband and children have travelled to an unnamed country to spend as little money as possible, time is the currency of the holiday. Vertigo, she tells us, is “the sense that if I fall I will fall not toward the earth but into space.” The drive up the mountain to their guesthouse with a drop off to one side of the road is the worst. During the day the family visits a tourist site, ruins where the temptation arises to remove a stone or even a piece of the rubble from the original structure. This stirs anxieties the woman recognizes as echoes of her mother rising through her and creating conflict with her own role now as mother to her children. Meditative, her thoughts roam with the sun drenched unanchored processing that we often fall into when removed from the routine of ordinary life. It feels as if Walsh has simply opened her hands to capture her character’s reflections and spilled them gently across the page. It is almost impossible to pinpoint how it works, but it does.

The minute attention to the inner moment, pared down to its most essential, is the quality that sets these stories apart. The conscious detachment of the self from the body of the mother waiting in the hospital while her son undergoes surgery in “The Children’s Ward” is especially poignant and will ring true for any parent who has placed their emotions on hold, not daring to think too much about possibilities, waiting, just waiting, distracting oneself with mind games when the brain will often not even distract itself with a book or magazine. Waiting for Charlotte (whoever Charlotte is, she does not know) to update her, the mother wonders:

“If Charlotte comes with her words comes to tell me it all went wrong how would my body know it? How long before the parts of my body realized, independently, that something was wrong and arrived, severally, at panic? Panic is still a thing. I have felt it before: each limb nerve organ coming into extreme alert unrelated to any other, ready for action, but who knows what action, as there is no action that could help here.”

Many pieces are very short, prose pieces rather than stories perhaps, each finely honed. The voices are wryly observant, tuned in to an inner monologue that mediates between the self and the self in the world. One becomes ensnared in the mesh of words, even in the simplest of stories. In “Relativity” a woman is traveling by bus to see her mother. She compares herself to her teenage daughter beside her and to the other women on the bus:

“Among other middle-aged women I don’t look too neat, and this pleases me.

I don’t want to say too much about the individual stories here. They are best encountered on their own terms. This is a book that invites a slow reading. It is not long, or difficult. But you want to savour each piece. This is fiction infused with fine imagery, charged with an electric current, shockingly alive to new possibilities of rendering the mundane exquisite. If you are not watchful it could leave you with a sense of vertigo.

Or maybe that is the goal.

Vertigo is published by the Dorothy Project in North America. The UK edition will be released by And Other Stories in 2016.

13 thoughts on “A delicate exposition of the everyday: Vertigo by Joanna Walsh”