I debated leaving this book undiscussed, unfinished even. It is not in my nature to write negative reviews but I am not certain my reaction to Voyage in the Dark, my selection for the Jean Rhys Reading Week, counts as negative as much as it stands as disappointed. I felt it was worthwhile looking into why this book and its author did not work for me as I had hoped it would, especially when, at one time, I did read and enjoy several of her books. If anything has changed, of course, it is me. I am not the same reader I was thirty years ago and, if there could have been a worse time for me to entertain the company of Voyage’s protagonist Anna Morgan, this past week would be hard to beat. 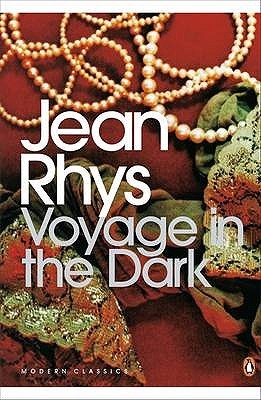 When we meet Anna, the young narrator of Jean Rhys’ 1934 novel, she is eighteen, going on nineteen, and working as a chorus girl. Transplanted to England from her childhood home in the Caribbean, she paints a picture of a country that is bleak, cold, rainy and unwelcoming. She meets Walter Jeffries while she is on tour and once she is back in London they connect and initiate an affair. Anna takes this development in stride, as if it is both her due and her fate. She tolerates the sex and relies on the money he provides her to pay her board in a series of rooming houses and buy herself clothing. If her feelings are conflicted, it is difficult to tell. If anything she comes across as inordinately indifferent:

Of course, you get used to things, you get used to anything. It was as if I had always lived like that. Only sometimes, when I had got back home and was undressing to go to bed, I would think, ‘My God, this is a funny way to live. My God, how did this happen?’

Happiness is at best a vague notion, elusive when she vaguely tries to grasp at it. Only when Walter leaves for an extended business trip, severing their relationship upon his return, does Anna feel “smashed.” She makes attempts to reach out to him, to win him back, but what does she really miss? His arms or his money? It is hard to be certain.

Anna is always cold. She blames it on her origins in a hot climate, but the chill runs much deeper. In contrast to her persistent obsession with the monotony of her English surroundings, memories of her life in Dominica are presented in richer, more vivid terms. They are shot through with a melancholia that does not speak to childhood nostalgia alone–there is a sense that her emotions are complicated–but these passages allow for some of my favourite moments in the book:

All the way back in the taxi I was still thinking about home and when I got into bed I lay awake, thinking about it. About how sad the sun can be, especially in the afternoon, but in a different way from the sadness of cold places, quite different. And the way the bats fly out at sunset, two by two, very stately. And the smell of the store down on the Bay. (‘I’ll take four yards of the pink, please, Miss Jessie.’) And the smell of Francine – acrid sweet. And the hibiscus once – it was so red, so proud, and its long gold tongue hung out. It was so red that even the sky was just a background for it. And I can’t believe it’s dead….And the sound of rain on the galvanized-iron roof. How it would go on and on, thundering on the roof…

Rhys’ prose is strikingly spare and unaffected. It works well when she is looking back, or when the narrative occasionally falls into brief periods of stream of consciousness. The personality of secondary characters, if not necessarily sympathetic, are rendered with stronger brush strokes than that of the young woman at the centre of the narrative. And this is where the Voyage in the Dark becomes an effort for me as a reader.

Anna’s extraordinary passivity is a hallmark of the novel, as are the abrupt flashes of impatience and pride that periodically flare around others. She can be fickle, petulant and self indulgent. None of these factors are a problem, together or apart; what seems lacking is a context in which to understand her attitude and behaviour. For many readers I suspect this elusive quality of Anna’s character is where the interest and appeal lies. I found that despite moments when I was ready to re-evaluate my response to the text, Anna’s hollowness, apathy and vanity would test my patience again.

When she muses “I was thinking, ‘I’m nineteen and I’ve got to go on living and living and living,” her reflections echo a person struggling with depression, and that may be a fair interpretation, but it doesn’t hold weight for me in spite of passages like:

It’s funny when you feel as if you don’t want to do anything more in your life except to sleep, or else to lie without moving. That’s when you hear time sliding past you like water running.

Anna holds no responsibility for anything that has happened to her in her short life. She is miserable and expects everything to be handed to her. That’s fine, there are people like that and I do not expect characters to behave in manner that I approve of or to be likeable. But in modernist fiction I anticipate a measure of believability that, for some reason, is lacking for me here.

This is, I caution, my own idiosyncratic response to a book that I realize is beloved by many. I can understand how, in my early twenties, living with an as yet undiagnosed mood disorder, as an ostensibly female person keen to find female characters and writers that resonated with my own alien understanding of my gender identity; Jean Rhys’ novels and female characters could have held a strong appeal. From this vantage point in my 50s, I suspect it is more my experience with mental illness, personally and professionally, than my cross gendered path that account for my difficulty pulling myself through this short novel. And then, I am also mourning the suicide of a dear friend who battled a soul crushing depression for more than a year before finally taking matters into her own hands earlier this month. Against that backdrop, Anna’s persistent gloominess was, shall we say, cold comfort.

21 thoughts on “Wrestling with Rhys: Reflections on reading Voyage in the Dark”