Aamer Hussein is a gifted storyteller. His clean, spare, emotionally sensitive tales explore, with just the right amount of detail, journeys, experiences and relationships that cross borders and cultures. His prose leaves his reader space to breathe in, room to recognize the sense of displacement, disorientation and disappointment his characters often encounter. This is especially true of Another Gulmohar Tree, a moving parable of love and marriage. 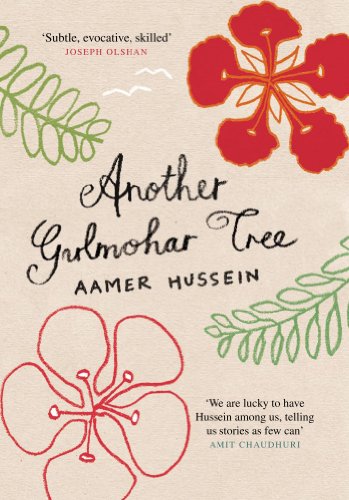 This novella begins, rather unexpectedly, with a series of short, fragmented fables. In one tale young man sits in the shade of a gulmohar tree to eat the midday meal his aunt has packed—stale bread and rancid buttermilk—which he shares with a strange talking frog. Tired after eating, he falls asleep, only to awake beside a pile of gold coins. In another, a farmer’s daughter is married to a crocodile king, soon her parents and a brother join her in his river kingdom. Much later, the providence of these tales will be made clear, but in the meantime, the narrative shifts to London in 1950. Here, a Pakistani man, a journalist on a year’s secondment, meets a British woman who is working as an illustrator. They are drawn to one another and begin to spend time together, Lydia showing Usman the sights of the city and keeping him company on his days off. Both are divorced after brief, unhappy marriages, both are lonely and ungrounded, but despite Lydia’s hopes, their friendship remains just that. Usman is forty-one, eleven years older than she is, London’s bleak winters and endless summer days bring him down and, in these early years following Partition, he feels an obligation to return to the newly independent country he has determined to make his own. Yet an uncertainty haunts him. In Lydia’s company he is at peace, but:

at work, or waiting at the bus stop to Oxford Circus or walking home from Marylebone Station, alone in the vanilla evenings that refused to shade into night, with his mind fixed on his return to Karachi, he’d ask himself questions to which he had no answer. What awaited him in the seaside city he had chosen as his home, he, a man who had no home because he’d lost his birthplace long ago and never learnt to belong anywhere else, what would he do with his life in that open city teeming with strangers like himself?

Two years after his return to Pakistan, Lydia follows on her own initiative, holding on to a few faint hints in Usman’s letters. She has prepared—even to the point of learning to speak  Urdu—intent on winning his love, which she already had won even if he hadn’t acknowledged it. They marry and set up home in a growing suburb of Karachi. Over the coming years she settles into the community with remarkable ease and good cheer, turning their humble little house into a home as they welcome three children into their family. Lydia who now prefers to be called Rokeya, fully embraces life in her adopted country while maintaining an ability to connect with other foreign-born (or foreign-focused) women when she wishes to. Over time, her husband begins to question himself, his career, his life.  He had once been a promising writer, but his dreams have faltered. He resents others who have found success (even plagiarizing his work to do so), and envies his wife who is devoted to their children, yet expanding her own creative and professional pursuits. Ten years into marriage, silence and unease starts to work its way into their relationship. Will Usman be able to see the beauty he has become blind to as bitterness and malaise has set in?

The outline of this tale is simple, but as ever, Aamer Hussein excels in the depiction of the attractions, affections and tensions that draw people together or threaten to push them apart. With Another Gulmohar Tree, he employs careful observation combined with literary restraint to create an unusual, intelligent, slyly romantic story, short enough to read in a day. And sometimes that is just perfect in itself.

Another Gulmohar Tree by Aamer Hussein is published by Telegram.

2 thoughts on “And Usman keeps singing: Another Gulmohar Tree by Aamer Hussein”