The key thread running through Lara Pawson’s fragmented, fresh, and frightening memoir, This Is the Place to Be, is an honest account of her years working as a journalist for the BBC in Africa between 1996 and 2007. However, it is much more than that. The epigraph is an extended quote from James Baldwin about androgyny and identity, about the way we are not male or female, black or white, but rather one within the other. Her opening admission (and this book is essentially a series of admissions that unfold, fold, and circle back on themselves) takes off from this observation, reading:

Identity and identification. The personal and the political. These are the forces that push this honest, sometimes conflicted, often unsettling account forward. 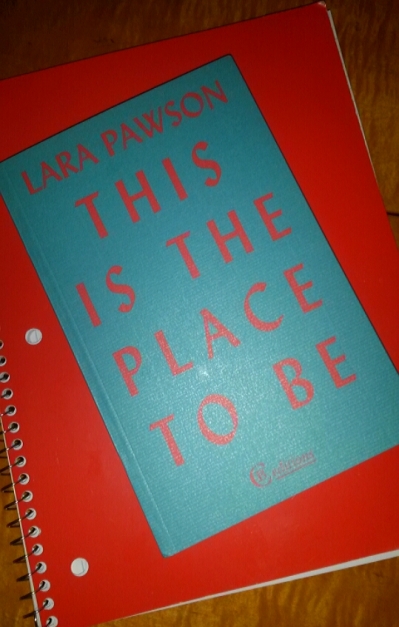 The book had its genesis as a piece composed for a sound installation called ‘After A War.’ Pawson’s contribution, Non-Correspondence, was presented as a 22,000-word looping monologue inspired by her experiences as a witness to war in Angola and the Ivory Coast—experiences that she found could not be isolated from other aspects of her life. A series of conversations and encounters over the following year or two led to the expansion of the original work into a book, an intensely personal collection of reflections, insecurities, emotions, and memories. The format is non-linear and, in keeping with the development of the project, it retains the feeling of an extended conversation to which we, as readers, are invited.

Second guessing her confessions and questioning the reliability of her memory heightens the immediacy and conversational feel. There is a sense of self-consciousness that lingers behind the intimate revelations, and a willingness to acknowledge a mixture of emotions as she recounts her experiences at home and abroad, in youth and in the present day. Life is messy. She is not afraid to admit this.

The corruption, devastation, and futility of war form the central focus of this book, but what Pawson manages to bring to light through her accounts and anecdotes is the complexity of sentiments that arise when one is close to the action in the dangerous, yet privileged, position of a correspondent. There is a curious exhilaration, and an attachment to the people. However, she is still an observer, there with a job to do, and home is, ultimately, elsewhere. She will admit that she was, for a time, infatuated with the idea of settling in Luanda taking on the life of a revolutionary , recalling fondly the first time she was called camarada. But, in the end, she must leave. She was disillusioned with mainstream media and the sense that she was contributing to the exploitation of the pain of others. And worried about becoming inured to it:

Another reason I left Angola was because I was afraid that I was becoming too thick-skinned. I didn’t want stop being shocked by what I saw and by what was happening. I was also feeling increasingly unhinged.

Letting go is not easy. Returning to life in London is not smooth. In many respects, This Is the Place to Be is a love song to Angola. She confides that there are times when she wishes she was still in Luanda: “Moments when I still get desperate pangs for the place.” Her affection for the country is palpable, its lasting impact at times unexpected. She tells us:

When I came back to the UK, I started reading books by Samuel Beckett. I had read bits of his work before, in my early twenties because I ought to, but it was only after experiencing real conflict that I got any kind of handle on the man. The way I see it, Angola taught me Beckett.

Against and woven into her experience in war zones are memories of childhood and youth, reflections on race and class, and anecdotes about her marriage and her social idiosyncrasies. The insecurity of identity—being mistaken for a boy, for a transwoman, for Jamie Lee Curtis—is another recurring theme. (Here her observations were of particular interest to me, given the themes that drive my own memoirish experiments.) Although it may sound that all this would make for a disjointed read, the result is quite the opposite. There is an ebb and flow between ideas that link this series of admissions. By allowing the fragments to flow in a manner that retains a natural and organic quality, the tangential transitions in time and place occur in much the same way they do when we are engaged in conversation with one another.

The fragmentary memoir seems to be an increasingly popular means of telling stories from life. However, it only works when it is not forced or contrived. Pawson leaves room for humility, for guilt, for insecurity. This keeps her book real. As the end nears, the intensity builds. We trust her. We are invested. And she leaves us where her heart lies. In Angola.

This Is the Place to Be is published by CB Editions.