She was a writer on my radar, Joy Williams, somehow unknown to me until recently, but then, the world of literature is large and sometimes voices pass us by until fate or chance draws them to our attention. Or, if the rather ambivalent and perplexed Lord who appears in so many of the stories in her latest collection has His way, a little divine intervention is exercised. And so it happened that I found myself in the ER earlier this week, an advance reader’s copy of Ninety-Nine Stories of God on my phone. Between the tests and assessments to rule out any heart problems (my own private post cardiac arrest paranoia I’m afraid), I devoured a healthy measure of these bite-sized fictional treats. The true cause of my symptoms laid me under for a good 36 hours, but I emerged today to finish the collection, slowly only for the sake of savouring these deliciously dark, reflective, engagingly original tales. 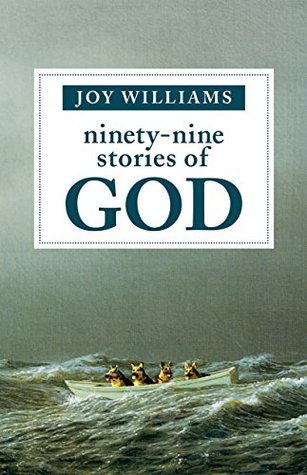 A healthy dose of the unique joy of Joy Williams proved the perfect medicine.

The ninety-nine vignettes and mini stories that comprise this precious volume run the range from the brief and aphoristic to “longer” tales that run for a page or two. A cast of literary, philosophical and other assorted personalities make appearances, as characters or subjects. Williams delights in building fables that feature Kafka, Karl Jung, Simone Weil, or Philip K. Dick among others. At times she reduces her musing to the very simplest of terms, as in this one sentence micro-story which receives its context, as most of the stories do, by the title which is always placed at the end:

You should have changed if you wanted to remain yourself but you were afraid to change.

The Lord Himself is a regular presence, as one might expect. He tends to appear in the most innocuous situations—He waits in a pharmacy line for His shingles shot, dreams of participating in a demolition derby, and expresses horror at the suggestion that He go to Home Depot to purchase supplies for a tortoise He wishes to adopt. Williams’ God is as curious and confused by His creations, especially those of the human form and He seems to have little control over the fate of His charges.

The Lord was asked if He believed in reincarnation.

I do, He said. It explains so much.

What does it explain, Sir? someone asked.

On your last Fourth of July festivities, I was invited to observe an annual hot-dog-eating contest, the Lord said, and it was the stupidest thing I’ve ever witnessed.

Bemused and caring, lovingly benign, this is a God one can’t help liking. Good thing too, because the world of the ordinary people (and animals, for that matter) who feature in the majority of these stories is often marked by loss, despair and an odd isolation from others.

In his Numéro Cinq review of The Visiting Privilege, a recent compilation of her first three collections of short stories, Jason DeYoung describes her work as:

Strange and dark, her stories and novels make their foundation in realism, but then you never know quite where they will lead to. Most stay firmly planned in the “manifest world,” while others drift off toward the uncanny.

This description holds fast here too, even in abbreviated form. The humour is black, and a disturbing energy courses just below the surface. Nothing is spelled out beyond the most spare, necessary, imagery. So many stories pivot, or pack their punch, not in the ostensible actions recounted but in the reactions of the characters which are often counterintuitive. There is a suggestion that we cling to our dysfunction, our delusions, possibly as a stand in for faith, leaving the poor Lord Himself an awkward outsider in a world He designed.

The style and format of this collection is most strongly reminiscent of Thomas Bernhard’s The Voice Imitator. Of course, it would be remiss if the great writer did not make an appearance as he does in a story about a woman reading book reviews:

She was reading a broadside that reviewed a number of books. The reviews were extremely intelligent and gracefully presented. She read about a cluster of works by Thomas Bernhard, the cranky genius of Austrian literature, works that had been translated into English. She doubted that she would buy these books. She learned that he always referred to his lifelong companion, Hedwig Stavianicek, as his “aunt”. She was thirty-seven years older than Bernhard. She couldn’t imagine she had been his lifelong companion for long.

Given the condition I’ve been in over the last few days that, through a wicked case of the flu, I reveled in these ninety-nine gems. This story goes on in a way that most wonderfully spoke to my state and made me smile:

She had had a fever for several days and she was loafing around, drinking fluids and reading. With her fever, the act of reading became ever stranger to her. First the words were solid, sternly limiting her perception of them to what she already knew. Then they became more frighteningly expansive, tapping into twisting arteries of memory. Then they became transparent, rendering them invisible.

I can assure you this will not be my last encounter with Joy Williams. I would encourage anyone whose interest has been sparked to check the review I’ve linked above which contains a video of Williams reading an essay entitled “Why I Write.” Ninety-Nine Stories of God will be released in July by Tin House.