A short story collection can be a curious beast, for the reader who may have a defined expectation about structure and form and for the reviewer who endeavours to capture the encounter with a writer who embraces and defies form as it pleases him. Having emerged from Past Habitual, the newly released collection of stories by Irish writer Alf MacLochlainn, the most helpful advice I can offer is: prepare to encounter narratives that will, at times, ramble and diverge into detailed accounts of practical matters: the treatment of scarlet fever, the options for constructing toilet facilities, the systemic way to approach the assessment of a corpse, the history and development of the stereoscope and more, but if one surrenders to the voices of the narrators, imagining a story recounted over a pint, such excursions prove remarkably compelling and, more often than not, fall imaginatively within the broader arc of the story unfolding around it. 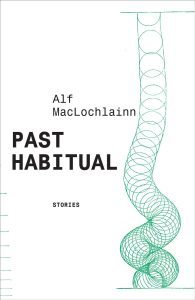 That is not to say that each of the twelve stories in Past Habitual follows the same formula – far from it. There are more traditional stories – “A stitch in time”, Demolition of a gnome-house”, “Why dd I volunteer to kill the kittens?” – that explore with a striking sensitivity, a budding love affair, a boy’s creation of a cardboard house in the garden as a symbolic retreat from the tensions inside his real house, a young man’s clumsy effort to impress his girlfriend and it’s disastrous outcome. His narratives are, however, frequently more complicated and sometimes very experimental in form and varied in style. Yet his keen ear and eye for the tenderness and brutality of human interaction surfaces throughout.

My preference often favoured the more unconventional narratives such as “Dot-and-carry-on” in which the segments of the story are offered as a series of linked dots connecting scenes like a child’s drawing activity as the narrator ties together key events in his personal and family history reaching back to the Easter Week rising and forward to a curious encounter with a Nazi spy living in the officially neutral Ireland during the Second World War. “Imagined monologues at a college function yield some explanation of the survival of the fittest” is, as the title suggests, a flow of conversational fragments that captures latent biases and prejudices that were not uncommon among mid-century intellectuals.

Born in Dublin in 1926, MacLochlainn was a career librarian. He has published a previous story collection and a novella. His stories extend a broad sweep across 20th century Ireland, from the Easter Rising, through the Second World War, to the political upheavals that have marked more recent times. Some stories are set against the backdrop of WWII, while others explore the role of memory in shaping and distorting the communal folklore within which pivotal events are recorded, remembered and passed on. As the sergeant instructing officers on the careful and appropriate use of a newly arrived shredder in one the most wonderfully inventive stories warns:

“without that evidential support, Guard, are we not entirely dependent on memory? And memory can be so fallible, can it not? – Or perhaps in some cases I should call it imagination…”

In Past Habitual, MacLochlainn skillfully blends remembrances, facts and imagination to offer a collection that surprises, challenges and delights. This recent release from Dalkey Archive Press is part of their Irish Literature Series.