“How can anyone live with the fact that they’re not Rubens? How does anyone come to terms with it? To begin with, everyone thinks they’re the exception to everything. But hardly anyone is an exception.”

This rhetorical question, posed by Martin to his half brother Ivan, is indicative of the truth that lies at the heart of F, the latest novel by German/Austrian author Daniel Kehlmann. Learning to live with mediocrity is something all of the Friedland boys struggle with. Martin has found everything he requires in the priesthood – everything, that is, but faith. The Rubik’s Cube, that multi-coloured plastic puzzle that was all the rage in the 1980s, retains the soul of his devotion while God has remained absent. Ivan is a would be artist who doubts his own ability but will ultimately find artistic expression forging “masterpieces” in collaboration with an elderly lover who agrees to take the credit. His twin brother Eric channels his personal insecurity into a career in asset management, complete with trophy wife, daughter and mistresses, until his increased involvement in fraudulent financial transactions drive him to a state of paranoid psychosis.

Faith, forgery, fraud. See a pattern? Don’t forget family. And, of course, father. As the book opens we see Arthur, a remarkably unambitious writer stagnating in his second marriage, as he takes his three young sons to see a performance by a hypnotist. Ivan and Arthur, both skeptics about the entire process, are invited to take turns on the stage. Their experiences that day could be said to set in motion the events that unwind and unspool as the boys grow up and try to find their footing as adults in the world. Or is there another, “F” word at play? Either way, Arthur disappears from the lives of his sons and their mothers on that very same day and none of them will hear from him for many years.

Confused yet? This is not a straight forward narrative by any means. It is told in parallel intersecting threads, a sweeping backward genealogy and a glimpse into the possible prospects of the next generation of the Friedland clan – prospects which rest rather heavily on the shoulders of Eric’s daughter Marie. At times insightful, sometimes funny and at other times drawing in elements of the gothic ghost story, F: A Novel endeavours to wind a tale too slippery to be tied down.

Ah but does it work? I was looking forward to this novel and, for pure entertainment I think it works quite well. The translation by Carol Brown Janeway is clean and precise. However, I am not convinced that it holds up to the critical reading expected of a potential prize winner. I found the characters too one dimensional and the coincidences just a little too neat and convenient for my tastes.

International Foreign Fiction Prize 2015: There are four German authors on the IFFP longlist this year. Compared to the two I have read so far, I am less inclined to feel this one is shortlist quality, but of course, we shall see what the jury decides.

Earlier this month I attended an inaugural PEN Canada event in my city. The purpose of bringing such discussions to locales throughout the country is to turn the discussion about censorship and freedom of expression inward where, against the outrages we see in other parts of the world, we risk falling into a false sense of complacency. The empty chair at this debate was reserved for Raif Badawi, the Saudi man sentenced to 10 years in prison and 1,000 lashes for the “outrageous” crime of blogging. His wife and children have been granted refugee status in Canada but the Canadian government is curiously reluctant to speak out. Why? I can’t help but wonder if their foot dragging around any international injustices that involve refugees or foreign born Canadians (the non-white ones, that is) reflects the persistent attitudes of the Conservative government’s core grass root supporters. Funny how soon we forget that all non-Aboriginal Canadians are immigrants in this colonial landscape if you go back far enough. The subjugation and treatment of our First Nations peoples is often seen as justifiable, built into our collective history. That is no excuse, but somehow racial concerns carry an entirely new intensity when the matter is much more black and white, so to speak.

Or when we see it elsewhere. 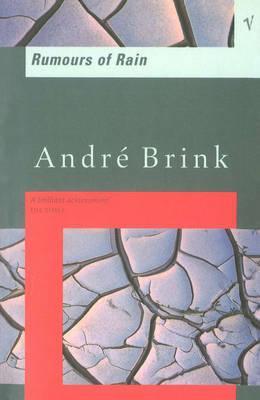 The recent passing of South African novelist André Brink led me to a long overdue reading of one of his classic novels, Rumours of Rain, which dovetailed nicely with the issues that have been in my mind since attending the PEN event. Published in 1978 and addressed directly to the injustices of apartheid, the echoes of this, and his other controversial novels of this period, have long reverberations that continue to ring  close to the bone in this increasingly global new world.

The power of Rumours of Rain lies in the narrative voice. Martin Mynhardt, a successful Afrikaner businessman, has stolen a rare week of solitude in London to exercise his literary ambitions while attempting to exorcise any measure of guilt in the unfolding of a recent series of events that have torn apart the lives of some of the people who were once closest to him. Driven solely by his own over inflated sense of self worth and an endless internal cost-benefit analysis, Martin is a ruthlessly blind apologist for apartheid. He imagines himself sufficiently enlightened to know what is best for his country and his family. He focuses his attention on the events surrounding a weekend visit to the family farm with his son where his goal is to convince his mother to approve the sale of the land, an urgent deal to which he is already deeply committed. But nothing is simple. Violence not only intrudes on his visit to the farm, but back home in Johannesburg, a violent series of riots is about to erupt in Soweto.

In a long winded, self indulgent, but oddly engaging account, he chronicles his complicated relationships with his best friend, his wife, his son, and his mistress. He honestly feels personally affronted by the revolutionary political passions he is witness to, especially in his friend Bernard – after all, he does not want them to reflect badly on him.  But he is unable to acknowledge any responsibility for the role any of his own action or inaction may have played in the end results; he can justify every selfish choice he makes in marriage, love, sex, business and friendship. No matter the cost.

Yet, in committing his story to paper, Mynhardt inadvertently succeeds in giving an eloquent voice to the very views he claims to disdain. He manages this by including transcripts from Bernard’s trial for treason, his son’s bitter reflections on his recent experiences with the army in Angola and through passionate exchanges with Charlie Mofokong, an educated black South African and childhood friend of Bernard’s whom he reluctantly employs to assist him in managing his mine interests.

Throughout the novel two interwoven refrains recur: Martin’s grandfather’s favourite Biblical passage “And have not love”(1 Cor:13) and the anthemic Nkosi Sikelel’ iAfrika.

What we end up is with is the voice of a deeply flawed, myopic (literally and figuratively) anti-hero; not surprisingly one who must have made more than a few attentive readers shift uncomfortably in their armchairs. Literature is often at its most effective when it gives voice to the under dog, but in skillful hands, like Brink’s, turning the narrative over to the less sympathetic side of the equation can have a resounding impact. Especially when we feel a moment of empathy with a man we want to despise, catch a glimpse of him in ourselves.

Fittingly, a month that started with a local PEN event, has ended with Freedom to Read Week in Canada. The opportunity to honour an author who used his voice, together with many of his fellow writers, to raise a chorus to question and challenge apartheid, seems appropriate. Today the intrinsic messages against racism, classism and greed still need to be heard by a wide audience.