About a month ago, as the response to the COVID-19 pandemic began to have a greater impact on daily life in my community, I became more determined than ever to take full advantage of the pathways behind my home aware that, for a variety of reasons, my freedom of movement could be curtailed at some point. It seemed a good time to invite a companion on these walks, one who would not violate any rules of social distancing. I chose Robert Macfarlane, or rather his text The Old Ways as narrated by Roy McMillan which proved to be an ideal introduction to audiobooks for me and the perfect narrative to walk with. Coincidentally, my engagement with this wonderful evocation of the lure of long travelled trails and passageways overlapped a group reading of Nan Shepherd’s classic The Living Mountain, guided, on Twitter, by Macfarlane himself. But more about that book later.

One of the finest nature writers of our time, Macfarlane is able to bring the world, to use a cliché, alive on the page or, as in this recent circumstance, in the listening. He is able to pull one into the landscape, its history and its place in the human imagination. His books are the product of a deep engagement with the subject at hand, a commitment that often takes years before the final text is complete. The Old Ways, subtitled A Journey on Foot is perfect walking companion because it is, more than anything, about walking—tracing paths and passageways—a book that is not about the destination but act of following the trail. A trail peopled with a collection of intriguing characters, living and long gone, for a path exists as evidence of the creatures who have passed on it before, even if lies hidden for many years or longer, waiting to be uncovered and tracked once again.

As ever, his eye is keen, his writing lyrical, and his affection for those he meets or travels with undeniable. The book opens with the detailed account of a December walk close to home, and as I made my way along the well-loved, oft-travelled trails behind my own home, still snow covered and wintery in denial of the season, I was secretly glad that I had an e-book copy buried unread in my electronic library. As much as I was certain I would cherish the audio experience, I knew I’d want to revisit the words. The setting he described was different, but the sentiment familiar:

This is the path I’ve probably walked more often than any other in my life. It’s a young way; maybe fifty years old, no more. Its easterly hedge is mostly hawthorn and around eight feet high; its westerly hedge a younger mix of blackthorn, hazel and dogwood. It is not normally a beautiful place, but there’s a feeling of secrecy to it that I appreciate, hedged in as it is on both sides, and running discreetly as it does between field and road.

Divided into four sections, The Old Ways, begins in England, traversing different types of landscapes—paths, chalk, and silt— and then moves to Scotland where he travels traditional waterways, explores the Hebridean moors and then revisits his first mountains, the Cairngorms. This is where his grandfather had settled after a life of adventure, and where young Robert fell in love with “high country and wild places.” It is also where his path crosses the ghost of Nan Shepherd whose intimate relationship with the same terrain is recorded in her masterpiece, The Living Mountain, a manuscript completed near the end of the Second World War, but unpublished until 1977. Macfarlane would not encounter her work until much later, long after the author’s death. But her poetic, deeply sensitive nature writing has no doubt informed his own. From Scotland, his journey moves abroad, to Palestine, Spain and Tibet, before coming home again to travel ancient paths and pay homage to poet and writer Edward Thomas whose footsteps guide him throughout this tribute to the powerful pull of the path.

Nan Shepherd, who was born in 1893, was well educated and travelled widely across Europe and to South Africa, but she spent most of her life in her childhood home near Aberdeen where she taught English. Known during her lifetime for a number of novels it is The Living Mountain, published only four years before she died, that places her in the company of the great nature and travel writers of the twentieth century. It is a quiet masterpiece. She writes about her beloved Cairngorm mountains with a mix of poetic passion and clear-eyed respect, chronicling her own maturing relationship with a landscape as alluring as it can be hostile and deadly. The early chapters explore, in turn, the features of the geological and meteorological environment, exhibiting a finely tuned attention to detail. She knows these mountains intimately, experiences a full-bodied engagement with the landscape. However, it is in the later chapters of this slender volume, those that deal with the living elements—flora, fauna, and human—and the more existential aspects—sleep, senses, and being—that this work really sings:

To bend the ear to silence is to discover how seldom it is there. Always something moves. When the air is quite still, there is always running water; and up here that is a sound one can hardly lose, though on many stony parts of the plateau one is above the watercourses. But now and then comes an hour when the silence is all but absolute, and listening to it one slips out of time. Such a silence is not a mere negation of sound. It is like a new element, and if water is still sounding with a low far-off murmur, it is no more than the last edge of an element we are leaving, as the last edge of land hangs on the mariner’s horizon. Such moments come in mist, or snow, or a summer’s night (when it is too cool for the clouds of insects to be abroad), or a September dawn. In September dawns I hardly breathe—I am an image in a ball of glass. The world is suspended there, and I in it.

Over the past month as I travelled with Robert Macfarlane and Nan Shepherd, I could not help but reflect on the pathways I’ve travelled in my life. As child I spent each summer weekend camping and hiking with my family in the Rocky Mountains, my head filled with adventures out of King Arthur and Lord of the Rings. As a teenager I found refuge on the horse trails winding through the aspen woods near my childhood home. In my twenties I moved across country, exploring the bird sanctuaries and natural areas of the Ontario cities we lived in. And returning to western Canada, I have cherished the large natural parklands in this city where I’ve lived for last three decades, especially the Douglas Fir Trail that extends behind my home. But my mind also wandered along trails that my travels over recent years have opened—the rugged shoreline of the Eastern Cape of South Africa, sections of the even more rugged Larapinta running along the MacDonnell Ranges west of Alice Springs, Australia, or the rutted red roads and granite sheets of rural Andhra Pradesh, India. 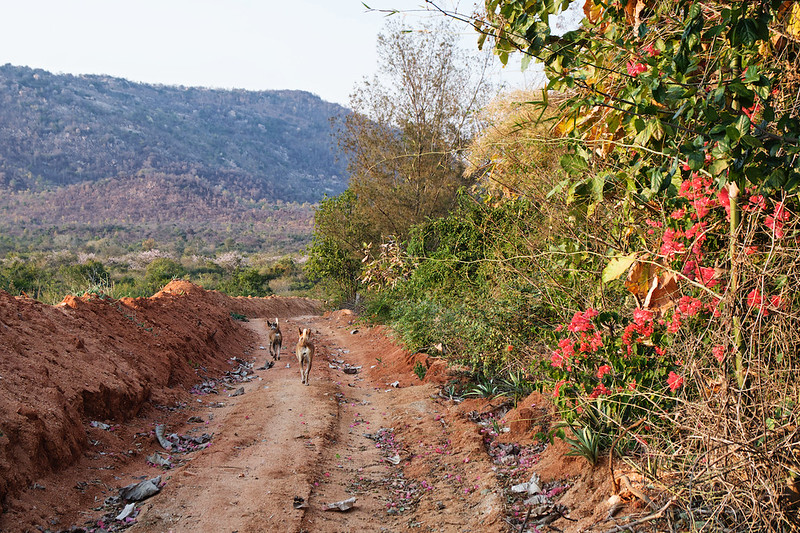 These are two books that allow you to experience the world through the words of dedicated guides, but like all journeys, the path ultimately leads you back home. Inspired by my engagement with these two gifted nature writers I recently wrote a piece for our “3:AM in Lockdown” series in which I attempted to follow the trail I know best and reflect on the uncertain state of our world at this moment. That short essay can be found here.