Valentines Day. It has been many years since I have had a true object of romantic affection. This annual occasion tends to come and go without my notice. Even my children are too old to warrant the heart shaped candies and chocolates I used to purchase. And yet I have to stop and wonder why I do not feel the absence.

I am not sure it is coincidental, but romance does not seem to figure highly in the work I tend to read. Lost love, dysfunctional relationships, misplaced attempts to find affection, yes; but it tends to be the underlying elements of discord that create dramatic tension and literary interest for me. Tolstoy’s unhappy families and all that. So in thinking about today’s exaltation of romantic love I decided to turn to a book I read last year but did not review, a novel that holds, at its heart, the account of a deeply felt but unrequited love: Damon Galgut’s Arctic Summer.

In this fictionalized biography of EM Forster, Galgut re-imagines the eleven years of frustrated creative blockage that spanned the time between Forster’s initial conception of his “Indian novel” and the final product, A Passage to India. Along the way we meet Syed Ross Masood, the Indian man with whom Forster will fall passionately in love – a love that will shape, define and haunt his romantic sensibilities – but which will remain one that the heterosexual Masood is unable to return in anything but platonic terms. During the World War I years in Alexandria, Forster finally loses his own virginity at the age of 37 but his meagre intimate relations will remain a sorry, even pathetic, attempt to achieve the emotional and physical comfort he longs to find in another man’s arms. Sexually repressed and closeted until his death, he is, nonetheless, able to channel his affections and experiences in India into one of the finest English novels of the early 20th century. It would be the last work of fiction Forster would produce though he would live and continue to write and engage actively in the literary world for another 45 years. 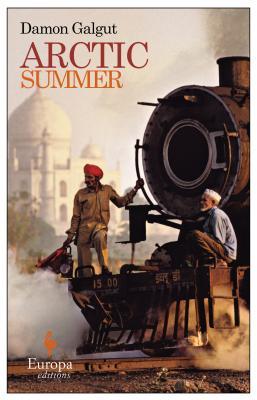 In my first encounter with Arctic Summer last fall my reactions were mixed. I was a great fan of Galgut’s more typical pared down, ambiguous and haunting novels and I was immediately struck by the more claustrophobic atmosphere he had created to evoke the sensibility of the world in which Forster lived and wrote. At times I felt it weighing on me as a reader. Having the good fortune to hear Damon speak in person and meet him when he passed through my home town with our writer’s festival while I was in the midst of my reading, I was aware that he had found the process of writing a historical novel rewarding but not one he would be anxious to repeat. That awareness may have been a factor but I suspect there was also something more at play. After all, as readers, we enter into any work with our own issues, histories and expectations.

At the timel I was still struggling to break down the barriers that I had constructed over the preceding decade or so to keep those around me from getting close. By that point I was painfully aware that I had re-closeted myself in the world to avoid emotional risk and vulnerability. At one point, despairing of ever experiencing desire in the way he longs, Galgut’s Forster reflects:

“His own sterility was apparent to him and would soon, he felt sure, be visible to others. Curiously, he didn’t feel depressed at the prospect. He was almost intrigued by the idea of giving in to his oddness, turning into one of those remote, ineffectual creatures so warped by their solitude that they became distasteful to normal people.”

I was struck by that passage, I remember where I was when I read it and the page number in my paperback American edition is burned into my memory. Although I had been, oddly enough, a single male parent for years, through my determined unwillingness to express romantic interest or engagement with anyone, female or male, I had stubbornly sought to neuter myself in the world. Unpeeling those layers of defense and reclaiming an identity, especially one that falls outside the default mainstream, is not easy. Forster’s dilemma was hitting too close to home.

As I have since learned to re-embrace my identity and sexuality, I did briefly imagine that I was ready to open myself again to the possibility of falling in love. The result was in influx of a emptiness and longing. I began to feel the absence and did not like the void. So I have decided to turn my focus to building an emotional support network based on common interest and experience. It is, I realize, a much better place to start. If, somewhere along the way, the potential for romance arises I would not necessarily reject it, but it cannot be the grounds for meaning and value in my life.

Now, four months after I first finished Arctic Summer, I have occasioned to revisit A Passage to India, and have found myself dipping back in and out of Galgut’s novel simply to savour the restrained beauty and sensitive recreation of the writer’s inner personal and creative journey against the lush landscape of India. The work has simmered in my consciousness and increased in the power that it holds for me as a reader. I cannot help but wonder what might have happened if Forster’s love for Masood had been reciprocated. I am not sure he would have ever been able to even crack open the closet doors and I suspect that he might have ended up even more deeply torn between his homosexuality and his attachment to his mother. For better or worse he was able to channel his energy into writing, friendship and a long life.

Well lived? For his sake I hope so.

12 thoughts on “A love song for the loveless: Reflections on unrequited love – Arctic Summer by Damon Galgut”