“ ‘Pushkin too had debts and an uneasy relationship with the government. Plus the trouble with his wife, not to mention his difficult temperament…
‘And so what? They opened a museum. Hired tour guides – forty of them. And each one loves Pushkin madly…’”

As Pushkin Hills opens, Boris Alikhanov is on his way to what he hopes will be a chance to pull the unravelling threads of his life together. He intends to secure a summer job as a tour guide at the Pushkin Preserve, a rambling estate dedicated to honouring and celebrating the life and memory of the famous Romantic Russian poet. He himself is writer whose literary ambitions have remained unrealized while his journalistic endeavours have raised a few official eyebrows. His marriage is in shambles, his refuge is the bottle.

As familiar as the tale may be, it is evident from the earliest pages that we are in the company of a narrator who is out to chart his own decline with a dry sardonic wit that manages to be, in turn, political, philosophical, and laugh out loud funny. Accepted on a trial basis by the collection of Pushkin fanatics in charge at the tourist centre – most of whom seem to be rather desperate middle aged women – Boris settles into ramshackle accommodations in a nearby village with a landlord even more decrepit than his abode. He then sets out to learn the tour guide’s script and routine. 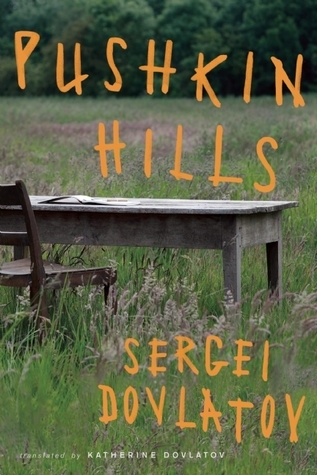 His stint at Pushkin Hills begins well. He masters the art of herding groups of tourists around the estate, riffing on the script when required and suffering the most foolish inquiries with surprising equanimity. Until his wife arrives. She is determined to move to America with their daughter, eager to follow the waves of immigrants leaving Russia, but Boris is bound by some attachment that he is not ready to cut. She asks him to join them or set them free, he begs her to stay. Yet once it becomes clear that she is committed, in fact even happy to be moving on with her life, he quickly begins to lose his precarious footing.

The end may seem almost inevitable. But the magic of this novel lies in author Sergei Dovlatov’s keen eye and ear for character and dialogue. Boris’ world, past and present comes alive in striking detail. At one point he reflects back on his courtship, such as it was, with his wife Tanya, noting the one time she called him. He arrives, after a little liquid fortification, to find her cousin waiting to meet him:

“The lad looked strong.
A brick-brown face towered over a wall of shoulders. Its dome was crowned with a brittle and dusty patch of last year’s grass. The stucco arches of his ears were swallowed up by the semi-darkness. The bastion of his wide solid forehead was missing embrasures. The gaping lips gloomed like a ravine. The flickering small swamps of his eyes, veiled by an icy cloud, questioned. The bottomless, cavernous mouth nurtured a threat.”

The purpose of this encounter is soon revealed:

“‘Why haven’t you married her, you son of a bitch? What are you waiting for, scumbag?’
‘If this is my conscience, ‘ a thought flashed through my mind, ‘then it is rather unattractive.’
I began to lose my sense of reality. The contours of the world blurred hopelessly. The cousin-structure reached for the wine with interest.”

Boris, for all his shortcomings is a deeply human and likeable protagonist. Even for a reader who lacks the depth of background in Russian literary and political history to pick up on all the allusions and often intentional misquotes in the text, Pushkin Hills is an intelligent, entertaining read. (An unobtrusive series of footnotes add basic background where relevant.) Originally published in Russian in1983, this translation by the author’s daughter, Katherine Dovlatov, brings to life a novel that manages to feel fresh and vital more than 30 years later and 15 years after the author’s death. As the translator notes in her acknowledgements, being able to work with her father’s rich material has allowed to her to continue a precious dialogue. A special gift indeed.

Pushkin Hills has been longlisted for the 2015 Best Translated Book Award (BTBA).

9 thoughts on “Do you see ruins? Pushkin Hills by Sergei Dovlatov”