You don’t tell the story of your own life, there’s no time. Life began the moment in which we got on board. The beginning is the Proleterka.

SS Proleterka was the last of Fleur Jaeggy’s currently available translated works that I had left to read and I did not want it to end. I used to think Sweet Days of Discipline was my favourite but this novel is far more subtle, real, and painful. And with none of the gothic overtones that creep into so much of her other work. A most dispassionate and restrained coming of age story, it is cold, calculated, yet charged with a deep, sorrowful beauty. 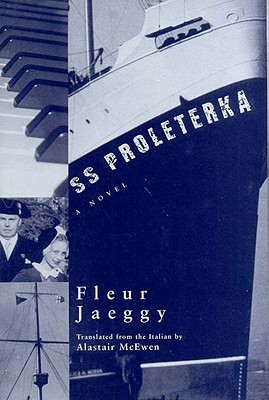 Central to this novella is the account of a cruise to Greece that the unnamed narrator and her father take when she is fifteen years old. It will turn out to be the last opportunity they have to get to know each other. Her parents separated when she was young, and she was deposited with her maternal grandmother, leaving her father effectively exiled from her life, forced to request time with his daughter—applications that were frequently denied or strictly curtailed. To have two weeks together over the Easter holidays is unprecedented, and precious, but unlikely to resolve the existing distance between parent and child. They are too much alike, too accustomed to emotional self-preservation. But, with almost surgical precision, Jaeggy’s crystalline prose exposes the currents of repressed affection that run deep beneath the surface of their relationship.

Our protagonist is looking back from mid-life, at her childhood and youth. She offers an unsentimental, clinical assessment of her own experiences, emotions, and interactions. It is a learned response to the world. Occasionally she speaks of “my father”, but most commonly she refers to him by his first name, Johannes. With respect to herself, she alternates between first person and third, talking of “Johannes’ daughter,” “she” or “the girl”—at times employing all three in the same paragraph. She is thus able to step back and place herself within the regard (or lack thereof) of others. Detachment is her means of coping.

As a young girl, she tells us, she lived with Orsola, her mistress or “the mother of my mother, of her who had been Johannes’ wife.” After her own parents’ divorce, her father’s parents who had moved south for the health of their other son, an invalid, lost the textile factory that had been in the family for generations. Johannes lost his inheritance and his wealth. For the narrator, her father’s family hold a tragic fascination. She does not know them beyond their photographic images. But then she hardly knows her father any better. It is her mother’s family who control her destiny, which will ultimately be boarding school. She is disposable and knows it early on. Still, she describes her “quasi-glacial” relationship with her maternal grandmother as the most intense she ever had, even if she is at a loss to know if she felt affection for the woman:

Orsola treats me like an adult. Like a peer. Obedience does not mean subordination. I close all the shutters. I do not open them in the mornings. A continuous closing. I close the day. Closing is order. It is a form of detachment. An ephemeral preparation for death. An exercise. It was entirely natural that that woman and the garden corresponded to the vision of a happy land. How much time did I still have at my disposal? The curtains at the window are fragile, almost dust. And she, the mistress, looks like a white plaster bust.

If her relationship with Orsola is formal and defined by expectation, her mother exists almost entirely in absentia. She is “Johannes’ wife.” By the time the protagonist is recounting her tale, she too is dead. Her daughter has only her jewels and her piano to remember her by. It is the Steinway, purchased in New York and carried across the ocean to Europe, that is the narrator’s closest connection to her mother. As an object resting in a specially prepared room, she endows it with personality, demonstrating an intimacy she could never find with the pianist who once played it:

You do not want me to touch your keys yet. My fingers are unfamiliar to you. That slight hint of carnality. But I am sitting beside you. I watch over you. In the first years I always kept the door closed. I wanted to be sure that no one came in. You alone, locked in. Now no longer. Now I allow you more freedom. And at the same time I allow myself more freedom too. I have become wiser. Before, if I felt resentment, it seeped into my veins, my eyes, my thoughts. An insomniac resentment.

Aboard the SS Proleterka, the connection between father and daughter is marked by a formality that neither can seem to breach. They have, she has told us, always been able to “perceive the exceedingly fine line between equilibrium and desperation.” By the time they are on this shared voyage, the daughter on the cusp of womanhood and the father aging quickly, they can no longer negotiate that line. The ship has been chartered by the Guild to which Johannes has belonged since he was a student. Having fallen into poverty, he is treated by his peers with a measure of pity. He is awkward, out of step. His daughter, meanwhile, is looking to test other waters while they are out to sea. As the voyage progresses, she engages in a number of rather abrupt sexual encounters with several of the officers. She is being used and she knows it, but she wants the experience. She likes and dislikes it at once. Having been raised by a family who could not show love, she seems unable to accept more than brute affection. Yet there is also the sense that she wants to evoke a reaction in Johannes, protective, angry, disappointed—anything—but if he registers her absences from their cabin he refuses to show it.

Day by day, their extended visit slips away. Trips ashore to visit ruins and others sites, exhaust Johannes and confuse his daughter. At Knossos, for example, his sadness weighs on her and distracts her:

I should pay attention to the woman’s explanations, says Johannes; I continue to look at her white gloves, the seams of her stockings. Her calves. “Höre, höre zu,” says Johannes, listen. I cannot catch her words. Only in my mind’s eye can I grasp what I see. The words are too much. And the light is extremely bright. The journey is important for Johannes. The journey to Greece, father and daughter. The last and first chance to be together. But we do not know this. Or perhaps he does.

There will be no magic breakthrough on this voyage, nor in any of the remaining visits the narrator makes to have dinner with her father in the hotel where he lives. There is an emotional stasis that defines their relationship and in a strange way it suits them. The narrator’s father will be long dead before she really confronts the importance of their bond. And even then it is stretched taut and unarticulated.

Perfectly paced and tightly controlled, the devastating power of SS Proleterka lies in the way Jaeggy manages to capture the complicated and unexpressed affection that underlie even the most strained parent-child relationships, while demonstrating the lengths to which a child who knows they have been disposed of will go to maintain a sense of identity. Self-preservation requires distance. If the narrator seems dispassionate at times, she is also resilient and real.

SS Proleterka is translated from the Italian by Alastair McEwen who maintains a remarkably clean, even tone throughout, seamlessly incorporating the German dialogue, and allowing the stark beauty of Jeaggy’s prose to shine. Highly recommended. Available from New Directions.

17 thoughts on “The truth has no ornaments: SS Proleterka by Fleur Jaeggy”