now a light lifts the soil
or is it the whirl once the foot touches
the rolling grains of earth within the darkness.

from On the Train of My Blood

I first came to know of Italian poet Franca Mancinelli in late 2018, when a collection of short, delicate prose poems called A Little Book of Passage arrived at my home, an unanticipated yet welcome surprise courtesy of translator John Taylor and Bitter Oleander Press. The shifting, transitory quality of these fragmentary pieces spoke to me immediately and I knew I had encountered a very special poetic voice. Imagine my delight, then, when I learned that our paths would cross last February in Kolkata where she was set to spend a month or so as Poet in Residence. Missing India and the City of Joy most acutely at the moment, it has been no small comfort to spend the past few weeks immersed in her most recent release in English translation. At An Hour’s Sleep From Here: Poems (2007–2019) comprises Mancinelli’s first two collections, Mala Kruna and Mother Dough, and is based on the revised versions included in a similarly named Italian volume, along with Out of Focus, Out of the Fire, a sequence previously published in a different version at the online site On the Seawall. As with A Little Book of Passage, this is a dual language Italian/English edition, again translated by John Taylor. 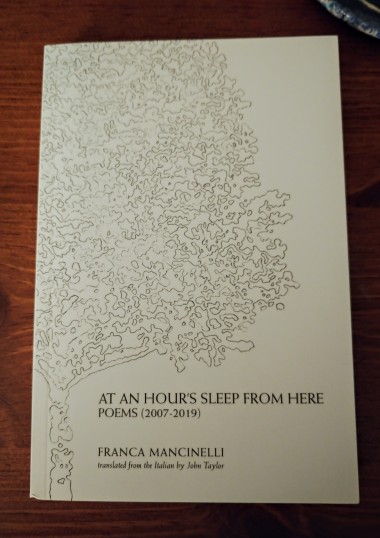 An extended conversation between poet and translator, together with translations of the longer prose poems included in the Italian edition of At An Hour’s Sleep and several other unpublished pieces, can be found in a special focus on Franca Mancinelli in the Autumn 2019 edition of the journal, The Bitter Oleander. This interview offers a window into her perceptive and intuitive approach to the creative process, an articulation the grounding of the writer’s place in the world. She speaks of an early awareness of an otherness, a feeling of somehow being set apart from her peers, that drew her to sketch out her thoughts in words as a way of trying to connect:

I believe that writing is a form of re-union: a way home, a possibility of returning to the original unity. The “fracture,” “fissure,” or “crack” that marks our identity as something separate and distinct belongs to us as a distant inheritance, received when we come into existence. It seems so essential to stay in the world that we are led to experience this fracture, while forgetting it. One who writes is, instead, called to perceive it clearly, with all the pain that it brings, along with grace. I think I started to experience it in childhood. It was like an extended solitude. A sort of condemnation and at the same time a salvation from whatever happens in daily life. The fracture can be opened as a refuge that preserves us, from which we can look out at everything flowing by in the splendor that belongs to life, in whatever form and state it presents itself, even in its most destructive and distressing appearances.

Reading the poetry of Franca Mancinelli one cannot help but recognize a kind of quiet urgency motivating her perpetual need to re-connect—this is writing as a vital act, as necessary as breathing. We all breathe as long as we are living; she seems determined to slip into the spaces between breaths and take us with her:

like stubborn insects
we keep flying against this
light that will not open, that smashes us

how much longer will we beat
on the windowpane separating
oxygen from the heart?

Mancinelli’s debut collection, Mala Kruna, opens At An Hour’s Sleep from Here. Originally published in 2007 when the poet was but in her mid-twenties, (the title means “Little Crown” in Croatian) this work contains four sequences that call into a shimmering, striking relief images from childhood and early adulthood, first encounters with love and passion, and, in the final sequence, The House in Ruins, intimations of a darker, wiser maturity. The central sequences The Sea in My Temples and On the Train of My Blood are especially powerful—the first conjures a dreamlike landscape within which the boundaries between the self and the lover and the natural environment blur:

I’ve always been here
at life’s onset
looking at these things
moving in your eyes.

The second sequence sounds the alarm, crossing into that space in which the relationship, now wound too tight, distorts, pains and eventually becomes undone. The separation is slow, the hold that the “he” has on the speaker is insidious, threatening her ability to maintain a separate agency:

and he keeps pushing the cradle,
his body like a thumb.

Passage by passage, she traces the conflicted emotions that accompany her effort to “undo the dress that the lips / have sown stich by stitch.” It is an agonizing letting go—recognizable, raw and real.

Mother Dough, Mancinelli’s second collection builds on the same imagery and themes—especially intimacy and self-identity—but with a new confidence. Still searching, still questioning, still exploring voids and spaces that overlap, the poet’s voice has a stronger presence, one that is evident from the opening poem:

a spoon in sleep, the body
gathers the night. Swarms buried
in our chest arise, spread
their wings. How many animals
migrate within us,
passing through our heart, halting
on the curve of a hip, among the branches
of the ribs, how many
would rather not be us,
not be ensnared
between our human contours.

The poems that follow are tightly honed with an often disquieting beauty. Unexpected images are merged with an assured hand, lines trespassed with such ease that one is frequently called to read and reread each piece to soak in its delicate incongruities. The flow of images draw on nature—animate and inanimate—and experience—physical and spiritual—but her observations are fleeting, ephemeral, tenuous marked by a continual opening up, a breaking apart, an aching thirst. A restlessness. A transition from one state to another. Throughout her work, the notion of metamorphosis plays an important, if sometimes unsettling, role. This transformation is often expressed in a fracturing of the body, natural features and objects as part of a constant process of reconfiguring and reimaging, and reflects the poet’s search to understand in her own place in her body and in the world. Intrinsic to her poetry, then, is an abiding existential uncertainty, a continual reframing of Being—a gathering together of explorations into the ongoing process of coming into being, ever sensitive to the elemental, fractured and fragmentary quality of the self.

At An Hour’s Sleep From Here is a beautifully presented volume with an illuminating introduction by the translator. Mancinelli’s verse is spare and fragmentary, and as such, whiteness—a representative silence—becomes an essential element. Few of the texts extend for more than ten lines; blank pages set each sequence or section apart. This minimalism is more than a form of poetic expression—it is a searching for meaning, for an understanding of how it is that we create a space in an unstable order of things. A searching we are invited to join.

At An Hour’s Sleep From Here: Poems (2007–2019) by Franca Mancinelli is translated by John Taylor and published by Bitter Oleander Press.