I started 2022 with a personal decision to focus on Norwegian fiction for at least January and February. There was no particular reason apart from a couple authors I wanted to visit or revisit and a general sense of Norwegian literature fitting nicely into a Canadian winter. Canada is a similarly northern country, albeit much larger, and I have often felt “at home” in the climate and landscape that emerges in much of what I’ve read from Norway. Of course, although I had a number of Norwegian books already on my shelves, this little project inspired the purchase of more, a trend that continued during the reading. 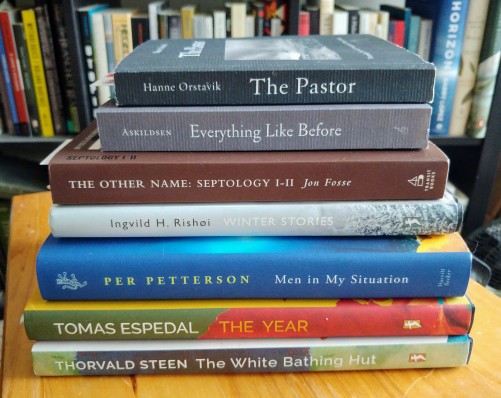 So, I have some thoughts about this experience. I read a total of seven novels or short story collections by five male and two female writers. This was the first issue. I had difficulty finding female authors of interest, although I have since become aware of a number I’d like to explore. My initial searches brought up a predominance of writers of noir and historical fiction—neither genres of particular interest. And then I inadvertently purchased a few titles that turned out to be Danish, not Norwegian, enough that I could probably do a month of reading female Danish authors. I will confess, though, that I was curious to read recent work by male authors my age or a little older, and in that respect, four of the novels I chose fit the bill.

I really enjoyed five of my selections, had a few minor issues with a sixth and was decidedly underwhelmed by a seventh. I decided not to review that title, as I felt there was little to gain by dissecting a novel I found so disappointing—I’m ready to accept that the problem is probably with me—but my response does deserve a few words here. The book is The Other Name: Septology I–II by Jon Fosse (translated by Damion Searls–Transit Books/Fitzcarraldo). I have yet to read anything but praise for this work which extends for seven parts over three volumes and I honestly expected it to be a book I would have liked. But, not so.

It’s the story of an aging artist, a widower, who is a misanthropic loner with a rather religious temperament. In the nearby city lives another artist with the same name, matching the same description, whose life has followed a very different course. He is drinking himself to death. Other characters in this small cast also echo one another in name and biographical details but live different lives. Or so it seems, because our narrator, Asle #1 as I thought of him, and no one around him, appears to notice the duplication beyond the name. The story unfolds in a ponderous leaden prose—a glacial stream of consciousness—ostensibly a single sentence, but one that reads more like “sentences” with an absence of full stops. Other punctuation occurs and any dialogue is off-set in the text. However, I could not help but feel that the author has given himself too much runway for the story he is trying to tell. It not only drags on, but his imagined memory episodes, like two sections where Asle watches (and listens to) a young couple (obviously himself and his late wife) in a park, made me irritated rather than impressed. The general narrative style and the potential metaphysical questions at play appeal to me, but the execution did not. I did finish it, if only to see if I caught the spark others have felt, but although the second part was an improvement, I can’t imagine going any further.

I could not help but wonder if The Other Name suffered in part from the fact that I picked it up, halfway through this project, after beginning with two books that I loved, my favourites overall as it turned out. Tomas Espedal’s The Year is a stream of consciousness novel in verse about aging and loss that is intelligent, humorous and sad, whereas The Pastor by Hanne Ørstavik is likewise a deeply internalized narrative, dark and meditative that also deals with grief and matters of faith. These first two reads were so strong—that is, perfect for me at this moment—that I filled in the rest of my Espedal collection and bought Ørstavik’s earlier novella Love. It’s worth noting that I was not put off Fosse altogether either, but rather than looking ahead to complete his Septology, I bought one of his very short novellas. I think I might appreciate his work more in a very tight space.

The balance of my Norwegian project featured three new-two-me authors, Thorvald Steen (The White Bathing Hut), Ingvild H Rishøi (Winter Stories), Kjell Askildsen (Everything Like Before)  and one long-time favourite, Per Petterson (Men in My Situation). When I think about it, the one theme that binds every one of the  books I read is isolation. That is, perhaps, a significant aspect of the appeal for me.

All in all, this little Norwegian project has been a rewarding experience—I read a lot of great books and bought even more. This is the first time I have set a solid goal early in the year and met it. I have also read and reviewed several nonfiction and poetry collections and one other short story collection since the beginning of January. It feels good have been so productive, slow reader that I am, but it will also feel good now to think about reading without any strict self-imposed objectives for a change. However, I do hope it bodes well for 2022, reading wise. I mean, we’re still dealing with the pandemic despite the willingness of many governments to believe it’s over and the worsening situation in Ukraine and ongoing conflicts elsewhere are terrifying. Then, of course, there’s climate change and so much more. I would suggest we need literature and art more than ever at this time.