Blogging, reviewing, and online book banter has brought writers, translators, and small publishers into my life that I may never have encountered otherwise. This is the beauty of a community of readers and book lovers that knows no borders. Last month I read two new collections by poets I came to know through this virtual literary network, both of whom I have read before: Magda Kapa and Stephan Delbos.

Greek-born Germany-based poet, photographer and teacher Magda Kapa captures small, finely observed moments in her poetry, sharing it on her blog I Was Not Born in English along with her photographs. Her new collection Losing Touch features spare poems that follow a form she credits to poet George Szirtes—3 stanzas of a haiku-like form followed by a single stand-alone 5-syllable line. As Covid came into our lives in early 2020, following Szirtes’ lead, she began capturing her response to the pandemic through these small structured poems. I have long followed her posts and have her earlier collection, All the Words, so as I read this new volume which chronicles the days, perhaps 8-10 times per month, from March 2020 to February 2021, I felt like I was sometimes encountering old friends in poems and lines that I myself had quoted and shared with others. Her images are sharp, her verses visually and emotionally astute:

Inside us, self-drawn
lines too, implacable bars
that one gets used to.

Although deceptively simple, these poems carry the poet’s immediate response, in the moment, to the way the pandemic has strained and altered our connections, our expectations and our dreams. As they evolve across the first year of Covid, they capture changes we can all relate to. There is the inability to understand, and the fear and uncertainty of the early days marked by anxious nights, an increasing focus on the interiority of our individual existences and necessary distance from loved ones. Alongside the changing pandemic reality, other realities also intrude, marked as appropriate, by hashtags denoting BLM, climate change, the Lebanon explosion.

When Covid hit I was editing for an online journal and it seemed we were inundated with pandemic submissions. We even ran our own series. It felt like a quickly saturated market, but now, as we move into the third year, I am grateful for records like this that speak to the early ebb and flow of emotion, but I know well that the final story is yet to be written. Losing Touch, beautifully illustrated with drawings by Elizabeth Adams, is a moving testament to the distanced, sometimes surreal and melancholic, unwelcome new normal we are still navigating two years later.

Losing Touch by Magda Kapa is published by Phoenicia Publishing. 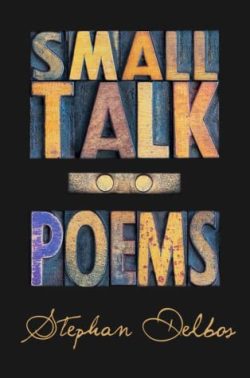 I first became aware American poet and translator Stephan Delbos as co-translator of Vitězslav Nezval’s The Absolute Gravedigger. I then read and reviewed Light Reading, his collection of sparse, fragmentary poems. Long based in Prague, he was named the first Poet Laureate of his hometown of Plymouth, Massachusetts in 2020 and his new collection, Small Talk, spans both of his homes in Europe and the US. In doing so, it also covers a broad range of themes and settings. Vivid images from the streets of European cities meet childhood Cape Cod memories meet poetic tributes to Michael Jackson and Aleksandr Solzhenitsyn and a chilling nursey rhyme style memorial to four boys killed on Gaza Beach.

However the highlight and centrepiece of this volume is the extended sequence “A Child’s Guide to Candor,” dedicated to his first child. By turns domestic, nostalgic and hallucinatory, a new father marvels at the wonder of a new life, a new role, and all of the dreams and fears that entails.

I dream of weeping on ice skates,
Olympiad Chorus swarming,
knife-bearing ceremony;
dream of burglars tearing books
and wake to the slumber of my son;
silence
of midnight hockey rinks
hovers in the house.

He implodes the luscious
fruit of dreams
fists tight as figs.

As he adjusts to his new role as a parent, the poet is flooded with an array of images drawn from his own boyhood, the adventures and the anxious moments, with knowledge that his child will have to face his own formative experiences—in time. He watches as his own parents settle into their new roles as grandparents and reflects on the generational shifts.

What is family?
Blood architecture.
Seasons of mind.
Rooms and furniture.
Bottles of words.
Charted worries.
Bookshelves of names.
Living photographs.
Lost property.
A story written.
of flesh and forgiveness.

The surreal strangeness of the early months and years of parenthood are so beautifully captured in this series of segmented poems— a personal celebration of new life in the world that reminds us that the future belongs to our children, in an individual and collective context, something we cannot afford to forget in these volatile times.