The year is 2011. A disoriented Adolph Hitler awakes in an abandoned lot in Berlin. Yes, that Hitler. He doesn’t know how he got there, but in 66 years he has not aged a day. Taken in by a newsagent who marvels at his uncanny resemblance to you-know-who, right down to the authentic uniform, he has to accommodate himself to a world which is alien. But accommodation is not his strong suit. What follows is a biting commentary on our modern world and, as such, it is fitting that he finds an audience for his rehashed rhetoric through TV and You-Tube. An audience that does not always interpret his “performance” as satire. After all, in his mind he is dead serious. 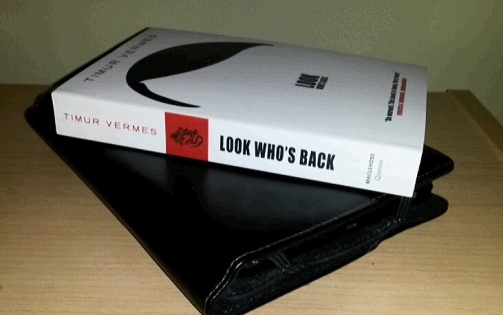 As you might imagine, this premise affords Timur Vermes, the German author of Look Who’s Back, an opportunity for much humour. The newly revived Hitler faces a host of curiosities  and surprising sights. He marvels at plastic bags, satellite dishes, the computer with its “internetwork” and all the residents of “dubious Aryan heritage.”

His first encounter with a modern television set is quite funny.

“To begin with I assumed that the flat, dark plate in my room must be some bizarre work of art. Then, taking into consideration its shape, I speculated that it might serve as a means of storing my shirts overnight without them creasing.”

Once a hotel maid introduces him to the secrets of the TV and its remote, he is very dismayed to find one cooking show after another. Naturally it is a waste to have such an effective tool for propaganda dedicated to such bland mediocrity. No worries though. Before long Hitler will be making his way on to the televised airwaves.

Even after more than six decades, he has not mellowed. His naivety is amusing, but his single-minded commitment to the visions, ambitions, and speeches of his past is chilling. It creates an abiding discomfort in the reader. That is, of course, the purpose, but the satire does wear a little thin over the course of the novel.

Author Timur Vermes does manage to maintain a consistent and steady voice throughout this accomplished debut. He keeps his Hitler grounded in reality, at least as he perceives it. Translator Jamie Bulloch does an excellent job of incorporating words that are most effectively kept in the original German, and in creating a realistic English slang for the younger characters. Together this all works to produce a quick, entertaining, if somewhat disturbing, read.

Independent Foreign Fiction Prize 2015: Look Who’s Back is well crafted and provides ample food for thought. It has a strong commercial appeal which may act in its favour for a spot on the short list.