As Yugoslavia, My Fatherland, the intensely powerful new release from Istros Books opens, it is the summer of 1991 and 11 year-old Vladan Borojević has, to date, enjoyed an almost idyllic existence in the seaside town of Pula. He and his young friends view the realm of adults as something separate, of interest only if someone is missing an arm or leg, or sports a long beard, excessive tattoos or some other particular curiosity. None of them are aware of the deep seated tensions within their native Yugoslavia that are about to start to fracture and begin a long, bloody period of unrest that will ultimately tear the uneasy Socialist state apart. On the day that he and his friends find the local men gathered around the TV set shouting at the politicians on the screen with an intensity normally reserved only for critical sports matches, Vladan senses something is amiss. His anxiety increases when his father arrives home looking empty and distracted:

“My father never drank at work, and I heard him say, countless times, that only in Yugoslavia would people drink more while at work than after work, and that this would send the country to an early grave. But that day he held me so powerfully in his muscled arms that I thought, in all seriousness, that he must be drunk.”

Vladan’s father Nedelko, of Serbian background, is a proud member of the Yugoslav People’s Army. His mother is a strong willed Slovenian woman, who, against her parents’ wishes, left her homeland and married her young soldier. The stirrings of political insurgency put an immediate end to their happy domestic life in Pula as Nedelko is seconded and the family is moved to a hotel in Belgrade. When it becomes clear that this little trouble is not about to just blow over, Vladan’s father disappears from his life. He and his mother will eventually end up in Slovenia, and within a few years news will come that his father, now a General, has died. Or so he is led to believe. 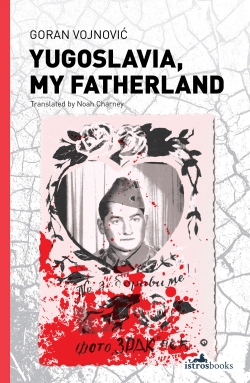 Seventeen years on, Vladan is still living in Ljubljana, Slovenia, but restless and unable to find his footing. He tosses his father’s name into Google. What he discovers turns his fragile world upside down. General Borojević is not dead, but rather he is a fugitive, wanted for war crimes. Rattled by this news Vladan sets out to find his father tracing a trail that links figures from his father’s past, a relative, an assumed identity, and clues to where he lived or may yet be. When his search leads him back close to home, the bits and pieces he gathers raise even more questions, and force him to look deeply inside himself to determine if he even wants the answers he had craved.

This is one of the most impassioned novels I have read in a long time. The author, Goran Vojnović, is a Slovenian poet, screen writer, and film director. He draws on this background to roll out a complex story that deftly weaves back and forth in time, negotiating the highly charged ethnic and geographic divisions that have long defined and divided the Balkan region. With Vladan he has created a recognizable, contemporary narrator who welcomes the reader into his journey with a mixture of vulnerability and wry humour. Traveling on the cheap in a car that just barely manages to cough from point A to point B, his descriptions are often priceless, like this stop at a roadside café:

“I sat at a table covered in a white cloth, as well as aged coffee stains, which lay over an even dirtier red tablecloth. A plastic ashtray sat in the middle, alongside a vase containing plastic flowers from the Yugoslav Mesozoic period. I had to wait, of course, to earn the right to pay for a sour coffee, hand-mixed with a disposable thin plastic spoon, amidst this particular ambience. It was my first time in such a setting.”

Whether he is looking back to his troubled childhood and adolescent years and his increased alienation from his mother, or looking forward to what truths may or may not lie ahead; his emotions are painfully open and honest. Even if he sometimes leans toward the melodramatic, it is hard to resist being pulled into his account of a life torn apart twice over and the pain of the very difficult dilemma he will ultimately face.

Yugoslavia, My Fatherland tells a multi-layered tale. The tragic dissolution of the Borojević family is traced out against the trauma and conflict that would rend the states of the Balkan region apart and still threatens further division in certain areas. He encounters many who bear wounds too deep to heal. But it is much more than that. Questions of personal and national identity are central. Vladan is not only seeking an understanding of himself and his relationship to his ethnic heritage, but he is striving to reconcile his memory of a loving father with a fugitive war criminal. A very human longing for closure and healing drives him to seek out and confront the man who used to be his father, whoever he is. However, somewhere along the way he will have to stop to measure the costs and decide what he is willing to risk.

Translated from the Slovene by Noah Charney, Yugoslavia, My Fatherland is original, ambitious in scope, and another welcome addition to the catalogue of independent UK publisher Istros Books.

6 thoughts on “Caught in a vicious circle: Yugoslavia, My Fatherland by Goran Vojnović”