In the note appended to the 2007 re-issue of Revulsion: Thomas Bernhard in San Salvador, author Horatio Costellanos Moya describes how a playful exercise in imitation led to very frightening death threats. Within a week of the book’s publication in 1997, his mother called to warn him against returning to El Salvador as he had planned. The immediate and hostile reaction indicates that not only was the element of satire missed, but the miserable misanthropic protagonist’s exaggerated rants were not entirely without grounds. But what angered some, impressed others, and the little book has endured, inspiring study, debate, and requests from citizens of other Central American countries for Castellanos Moya to similarly skewer their troubled nations. And now, at last, this incendiary novella is available in English from New Directions, in a no-holds-barred translation by Lee Klein. 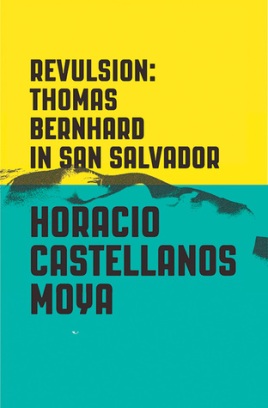 Presented with exuberant Bernhardian spirit, Revulsion is a relentless parody of the Austrian writer’s trademark style. The rhythms, repetition, and tone of Bernhard’s classic works are evoked along with a brutal, insistent ravaging of El Salvador and its capital city that is reminiscent, if not even more graphically emphatic, than the famous rants Bernhard routinely leveled against his own native country.

The eponymous narrator here, in a role common to many Bernhard novels, is on the receiving end of a breathless monologue recorded over the course of one single paragraph that stretches for more than 80 pages. The speaker is Edgardo Vega, a professor of art history who fled El Salvador for Montreal at the age of eighteen. Now, a further eighteen years later he has returned for the first time, to attend his mother’s funeral and ensure that her house is sold so that he can secure his claim on his share of her estate. To say there is no love lost between Vega and his native country would be an understatement.  His most prized possession is his Canadian passport, if he is proud of anything it is his successful escape from the pathetic aspirations of his middle class brother, the crime, the social decay, and the miserable dearth of anything resembling class or culture in San Salvador.

San Salvador is horrible, Moya, and the people who populate it are worse, they’re a putrid race, the war unhinged everyone, and if it was already dreadful before I took off, if it was unbearable for my first eighteen years, now it’s vomitous, Moya, a truly vomitous city where only truly sinister people can live, which is why I can’t explain why you’re here, how you can be around people who are so repulsive, around people whose greatest ambition in life is to be a sergeant; have you seen them walk, Moya?

No custom, institution or individual is left unscathed. Vega rails against his brother who owns a lock and key business, but shows no interest in books or art or anything beyond the most pedestrian popular music. He has less respect for his “ex-clothing store clerk” wife and his two “pernicious” boys who spend their time glued to the television set and have the audacity to call him Uncle Eddie. Even the old school friend with whom he is sharing a few hours at the local bar, a place he tolerates only in the quiet hours between 5:00 and 7:00 pm, is not entirely free from a measure of Vega’s contempt. The patient narrator’s literary ambitions are soundly ridiculed. In this way, Castellanos Moya is mocking himself, as he allows his ranting character to eviscerate his country.

The famished little stories about sex and violence aren’t worth it, I say this to you with affection, Moya, you’d be better off staying in journalism or another discipline; but at your age to be publishing these famished stories is a pity, said Vega, no matter how much sex and violence you put into them, there’s no way these famished little stories will transcend. Don’t waste your time, Moya, this isn’t a country of writers, it’s impossible for this country to produce writers of quality; it’s not possible for writers who are worth it to emerge in this country where no one is interested in literature, art, or any manifestation of the spirit.

As Vega’s account of the indignities to which he as thus far been subjected over the course of his return to his home town builds to a hilarious conclusion, one can feel the enthusiasm with which this exercise in imitation was created. Imagery is pushed to a vile extreme in places and, as much as humour slides through, the polemic unleashed against El Salvador is merciless. Castellanos Moya captures Bernhard’s tone and style with an almost pitch perfect delivery right down to the surprise ending. But with a protagonist who spits enough venomous spleen to make Bernhard’s most hyperbolic vitriol read like an afternoon at a Sunday school picnic, it is little wonder the satire was lost on some readers. All the same, for those who love the infectious wit and humour of the Austrian master, Revulsion: Thomas Bernhard in San Salvador is a wonderfully entertaining look at post-Communist El Salvador through a very dark lens.