For all its sins, Twitter is still a terrific way to connect with readers, writers, translators and small publishers and, in the process, hear about books you might otherwise miss. Witness by Polish writer and psychologist, Robert Rient, is a case in point. I came to know of it by way of the translator, Frank Garrett, and was immediately intrigued by this story of a man who grew up gay and Jehovah’s Witness in Catholic Poland. I ordered the book and, as soon as it arrived, I had a quick look and immediately knew it was the type of book for which I would want to pitch a critical review.

I am intrigued by original approaches to memoir writing, that is, 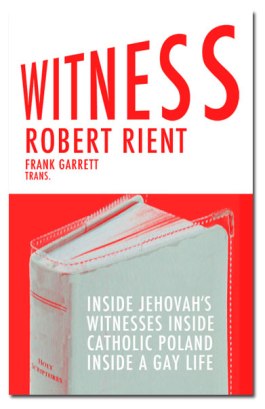 intentional writing about ones’ own experience. In Witness, the story is carried by Luke, the writer’s younger self—the boy and young man torn between his faith community and his sexuality—and Robert, the grown man who marks his break with his past and his rebirth as a whole person, true to himself, by taking a new name and identity. Woven through these two narratives is a fascinating look inside the Jehovah’s Witness church. As someone with a dual identity history, albeit different in nature, I found a lot to admire in the telling of this story, as well as in Robert’s honesty and the powerful transformation he chooses to make to mark his move forward into a new authentic life.

My review is now live at Minor Literature[s]. Thank you to Tomoé Hill for entertaining my contribution.

Minor Literature[s] has been repairing its archive so I have reproduced my review here:

Not yet fourteen years old, Luke Zamilski is waiting his turn to climb into a garden swimming pool set up in the middle of a large stadium. Thousands of people fill the stands. He has endured months of interrogation by the elders of his church congregation. He has memorized the precepts of his faith and the Biblical justification and ammunition afforded each one. He is ready. With his baptism, Satan will come to know of his existence, but Luke is eager and enthusiastic because he also knows that, on this day, he will be granted a clean slate. With this expurgation, he trusts that Jehovah will remove the thorn that has been working its way into his flesh through these early years of puberty.

Luke’s story begins with the dramatic retelling of a fire that destroys his family home when he is just shy of his fourth birthday. As part of the small Jehovah’s Witness community in Poland, the aid and support of fellow church members is immediate, as is the curiosity and derision of their Catholic neighbours. When the family is eventually settled into a new house, Luke is given a used briefcase in which he is to store his important papers should he ever need to escape a similar circumstance in the future. That same case will also go on to hold his precious diaries, his poetry, and eventually, he tells us, his porno mags, letters, newspapers and more. A place to contain both his documented and his hidden life. Thus, this event sets the stage for the account of a life that is destined to be doubly isolated. He is cut off from the normal social activities and celebrations of his peers by his “feline faith”, and then, as he struggles with his sexuality, he risks being denounced by his church community for falling prey to a sin thought to be worse than murder.

Witness, by Polish psychologist and writer Robert Rient, is at once an original and engaging chronicle about growing up gay, and a disturbing look deep into the manipulative and damaging environment of a religious organization that shares many similarities with other fundamentalist Christian churches, and yet is its own strange entity. However, this is not a case study or a psychological essay. It is, rather, an autobiography in three voices.

Luke carries the immediate and emotional core of the narrative. He agonizes over his inability to refrain from masturbating, and the curse of the ‘thorn’ he carries. He begs to be relieved of his affliction and prays for the imminent arrival of Armageddon, for release from worldly temptation and the corruption of Satan. He throws himself into the church, preaching and witnessing, and yet he is also drawn to the arts, to writing and drama, and eventually chooses to study in the city of Poznan after graduation from high school. There he will vacillate wildly between fanatical commitment to his faith, a desire to succeed in his studies, and a dangerous entanglement with drugs, alcohol and self-harm. Guilt and shame dog him, throughout his youth and on into early adulthood, intensified by the very real threat of disfellowship from the church, and rejection by those he knows and loves. His desperation becomes intense. At the age of sixteen, for instance, he makes the very Biblical pledge to cut off his offending appendage:

I take a knife from the kitchen. I go upstairs to the second story. I enter the bathroom, turn on the light. I drop my pants to the floor, pull down my underwear. I apply the knife to the base of my penis. Wait. I’m scared of the pain, that I’ll bleed to death. I gently drag it across the skin. It stings. It leaves a red line on the flesh. I won’t do it. I’m too weak even for that.

His first confidant is Robert, whom he ‘meets’ at the age of eleven. Somewhere between an alter-ego and an imaginary friend, Luke first summons Robert ‘out of nothing,’ a new identity to step in when the waters become too rough, someone to pick up the pen and write in his journal the thoughts and feelings that he dare not own. Robert carries the second narrative voice, looking back from the present with a certain, almost clinical, detachment at his troubled younger self, providing a grounded counter perspective. His measured tone speaks to his own hard-won peace, but a fondness and affection seep through, along with an abiding sense of loss. Although his parents will ultimately stand by him, and his older brother who also leaves the faith, the rejection of the friends and relatives who stay behind is cold, harsh and unforgiving. The cost is very real.

The third narrative, “Witnesses,” details the inner machinations of the Jehovah’s Witness enterprise—bringing to light textual materials, facts and figures, and unwrapping many of the arcane and disturbing beliefs promulgated within their organization. What is revealed is a misogynistic, sexually repressed, hierarchical system that denies celebration of holidays and birthdays, but permits limited alcohol and abortions (Armageddon is ever imminent after all), and encourages the physical discipline of children as a sign of affection. The church is widely spread across the globe and supported by vast quantities of written materials, most recognizably The Watchtower and Awake!, which are translated into a multitude of languages and distributed by members who are required to spend long hours knocking on doors and standing on street corners.

What we have then, is a memoir presented as an uncanny collaboration between the author, Robert, and Luke, the boy and young man he used to be, along with an exposé of the secretive church ‘they’ were born into. As an affectation, it would risk sounding overly theatrical, but this approach allows a much deeper, more genuine narrative to develop. In Luke’s account, supported by frequent excerpts from his diary, we hear of his youthful enthusiasm for his faith, his anguished attempts to fight his homosexuality, and his pull toward all the temptations and possibilities of a ‘worldly’ existence. By contrast, Robert’s perspective sounds at once insightful and limited. He wants to fill in the gaps, seek out the views of Luke’s former friends, and try to analyze, interpret and defend his fate. He knows how the story will end. In describing his first encounter with Luke, Robert says:

I suppose we already knew that we would meet again and that I would have to live. That he had to die. I didn’t kill him. But had he not died, I wouldn’t have been. Everything that happened to him, every torment, was convenient for me. His weakness and self-loathing were my justification and my provocation. Besides, he wanted to die. He talked about it again and again. I have evidence. I am the witness regarding this matter.

As the narrative alternates between the three voices, the mood shifts. The Witness sections are delivered with neutral authority. At times Luke’s actions are used to illustrate a point, and occasionally the reader is addressed directly, as, for example, in: ‘There exists an informal list of banned books which includes the one you’re reading.’ Both Luke and Robert speak in the first person, and refer to each other as ‘he.’ At times, when appropriate, first person plural is also employed. Luke longs for the comfort of his alternate identity most when he feels isolated and depressed, leaving Robert effectively sidelined, observing from a distance much of the time—a tone that comes through clearly in his sections, setting them apart from Luke’s. As Luke battles addiction, the loss of self-esteem, and suicidal thoughts, one can sense a growing friction between the two voices, as if Robert is slowly coming into sharper focus within their dual existence.

At the end of this powerful account of transformation and rebirth, Robert Rient emerges from the restraints of a religion that rejects his very being, and comes, over time, to accept and love himself as he is. It is his conscious disassociation that provides protection and allows him, with the support of friends and his academic training in psychology, to survive the very tumultuous break with his faith. Once the internal division is no longer required, he sheds his name and identity, along with his past, to claim a new wholeness. And in telling his story in this way, with equal respect for his past and present lives, Rient is able to capture a conflicted, painful journey with a fresh authenticity that reaches beyond the specifics to touch the universality of the experience of striving to be true to one’s self.

It is of note that Frank Garrett’s translation effectively captures the shifting tenor of the narrative, something which is essential to the success of this multilayered approach. He also includes a guide to assist with the pronunciation of the Polish names in the text, and in his afterword, he details the choices that were made with respect to language, and the challenges of accessing the original resources required to render this unique memoir into English.