The well-being of any household rests on selective acts of blindness and deafness.

India is a linguistically diverse country, with twenty-two scheduled languages, thirteen different scripts, and over 720 dialects. Yet when Western readers think of contemporary Indian literature, the work that most readily comes to mind  is typically written in English, whether by India-based or diasporic writers. Ghachar Ghochar by Vivek Shanbhag, which has garnered much attention over the past year, has been, for many English readers, their first introduction to a book originally written in the South Indian language, Kannada. As one of the long listed titles for the 2018 Best Translated Book Award (BTBA), even more readers will now have a good excuse to meet this established Indian author through this novel, his first work to be translated into English. 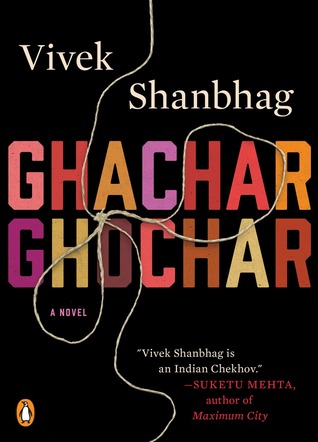 At first blush, Ghachar Ghochar seems an unassuming short novel—the story of a family whose financial circumstances take a turn for what should be the better, and the impact of their newfound fortune on their household dynamics. And so it is, but it is much more. Complicated undercurrents run through this tale, building to an ending with uncertain and disturbing implications. What makes it especially unsettling, and affecting, is the strangely passive, rationalization of the narrator. He practices a willful ignorance.

The novel, set in Bangalore, opens at our protagonists’ favourite haunt, Coffee House, with a description of Vincent, the attentive waiter and quiet confessor who tends to his customers’ need and listens to their woes with sensitive discretion. He is not an audience so much as a pretext for the unnamed narrator to unfold his account. Something is troubling the young man. But his concern is distracted. He seems to harbor a conflicted attitude toward women—lack of understanding even—that hints at but does not betray the depth of what we will eventually learn is the true nature of his anxiety.

What follows is a portrait of a joint family bound at all costs to the well-being of the bread-winner, a holdover from their earlier days when resources were limited and they learned to stick together, “walking like a single body across the tightrope of our circumstances.” However, that which once insured their survival in the face of financial distress, stands to destroy them once money is no longer a pressing concern. The story unfolds in terms of status, beginning in the present. The narrator who lives with his wife, his parents and his sister, and all are expected to defer to Chikappa, his father’s younger brother, the founder of the successful spice distribution company that has afforded the ascension of the family from a cramped, dirty house in a lower middle class area of the city to a smart, two-story dwelling across town. Although it is officially a family business, in practice there is little need for the other men to have more than perfunctory roles. The uncle manages it all and the family lets it be. Everyone except Anita, the narrator’s wife, who comes from a very different background and ethic.

Moving down through the family hierarchy, the narrative steps back in time to the years when the narrator’s father, his Appa, struggled to look after his family and put his brother through school on a modest salesman’s salary. Yet, even if money was ever in short supply, he placed great value on good honest, hard labour:

He was inordinately proud of being a salesman. “What do you think a salesman is . . .?” he’d boast, especially when launching into stories about his prowess—how, for instance, he’d managed to sell to a shop whose shelves were always brimming with tea. He polished his shoes every morning and put on an ironed shirt. He’d leave looking like an officer and return at night, wilted from the day’s sun, his clothes rumpled. One glance at his scuffed, dusty shoes was enough to betray the nature of his day’s work.

Everything changes when Appa is unexpectedly forced into early retirement. This is the impetuous his brother needs to act on a business scheme he has been contemplating and, although both brothers are co-owners, they soon find themselves ideologically at odds and as the spice firm takes off, Appa drops into the role of a silent partner, slipping into an increasingly defeated mood. His family worries about his sanity, but not for his sake so much as their concern about their right to his share of Sona Masala’s assets.

The narrator, who with his mother and sister all fall in place, more or less on level, below the two older men, makes much of the interdependence of his family, financially bound in poverty, emotionally bound in wealth. They are all at odds, in their own ways, with the world into which they have ascended almost overnight:

It’s true what they say—it’s not we who control the money, it’s the money that controls us. When there’s only a little, it behaves meekly; when it grows it becomes brash and has its way with us. Money had swept us up and flung us in the midst of a whirlwind.

The sister, Malati, has a particularly disastrous, short-lived marriage. Amma, the matriarch, tries to mediate between family members and maintain their honour against an outside community she no longer knows how to negotiate. Meanwhile, the narrator seems to lose any drive or motivation he may have once aspired to. He too is given a title in the family business, complete with an office and income, but soon realizes there is little for him to do. His uncle has everything under control and no one dares to question what that really means. He takes to lazing around in bed and frequenting Coffee House, showing little ambition, afraid or unwilling or perhaps unable to break away and create a future for himself. With the addition of Anita, his bride by arranged marriage, the precarious household harmony is set completely off balance. The daughter of a professor, she comes from a different background with different expectations and little inclination to suffer fools gladly. She also brings the book’s title, a nonsense expression unique to her family meaning “tangled beyond repair” that she shares with her husband on their wedding night. Yet, it is unclear whether he understands the full relevance of this image before it is too late.

Told with a carefully weighted tone and an economy of words, Ghachar Ghochar is a deceptively easy and enjoyable read. It is not until one nears the latter pages of the book that a creeping unease enters the narrative. The protagonist notices many troubling signs, but repeatedly neglects to act. It is unclear if he shares his father’s tendency to despondency or is simply too self-focused. The troubling factor is that this type of opting out, is not an uncommon response for young men when they cannot find their footing under shifting socio-economic conditions that they feel, rightly or wrongly, are beyond their control. In the Indian setting, the complications of family dynamics and expectations exacerbate the situation. And this, for me, is the real strength and tragedy of this slender volume. There are no easy answers, no heroes, no clear resolutions.

8 thoughts on “As it is in our house: Ghachar Ghochar by Vivek Shanbhag”