I confess to be rendered speechless, or is that wordless, at the prospect of saying anything that can do justice to the experience of reading Before Lyricism by Greek poet Eleni Vakalos. This collection is comprised of six book length poems from early in her career, is misleading upon first glance. Some pieces are broken into subtitled sections, elsewhere fragments hang in mid-air, continuing from page to page or changing course midstream. But each book is an intended whole, meant to be read as such. And the collection, presented together, contains cross references, themes that reappear, and an open-endedness that is echoed throughout. As the translator, Karen Emmerich, tells us in her essay that closes out the book, Valakos intensifies the grammatical features her language affords in unexpected ways:

Present active participles such as following, watching, leaving, grasping resembling, normally rare in Greek precisely because of the ambiguity they invite, allow the poet to systematically  obscure the subjects of her verbs: one might say that nearly all Vakalos’ particles dangle.

Punctuation is either absent or minimal, numbers of subjects and objects and verbs may not match, main verbs may be missing altogether, whereas several potential subjects may emerge. Yet the opacity that arises creates its own allure, its own space for reading into meaning. For the translator, the challenge is allow a process of unfolding to occur. The poems, as presented, represent a decade’s worth of work and as she admits they are “less an end product than a resting point in a process that could easily have continued for another decade or more.” It a tribute to Emmerich’s skill and sensitivity, that sense of being in flux comes through. And that is, I think, what catches the words in my throat or rather in my fingers on the keyboard, as I attempt to capture a sense of this book. 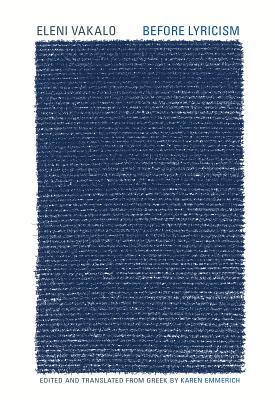 Dating from the mid-1950s to the mid-1960s, natural elements have a dominant presence in the poems that comprise Before Lyricism. Engagement of the human (poetic) experience with the nonhuman is fluid and often undefined, boundaries blur. There is a sense of being inside the reading, an effect of the frequently shifting subject, incompleteness of many passages, and the poet’s use of space on the page. It is a sensation impossible to reproduce with a selection abstracted from any one of the poems, a task which, in itself, is antithetical to the way the poet wanted these pieces to be encountered:

How many times hunched in his boat does the fisherman
.         list with it over the abyss

Fishing for the dark life of my soul

And when at last the fish rises seized on the bait it seems a
.        stream begins to run from the darkness to the waters

of the sea
.                         Where could you find for it seasons
In bloom, so many gardens brimming
With despair, with incredible eros
Now in spring as they spun slowly lifting the coolness
I sat at night and watched the gardens becoming
Deep in a way, reminding me of the listing embrace
Of all those who become lovers
Of a breathtaking fall that lasted
The whole of that deadly sky

There is, within Vakalo’s poetry an intimation of the deeply unsettling potencies at play in the natural world. The images evoked are beautiful and threatening. “Plant Upbringing” (1956), as a particularly striking example, casts the garden as a place of nocturnal conspiracies, paints flowers and trees as defiant, even rebellious monsters. And yet, plants, as she sees them are entirely recognizable and imaginable, it is the poet’s engagement with the vegetative reality that is intuitive and alarming:

There is a persistent element of danger in the most obvious and the most innocuous moments. That is, for Vakalo, where the poet rests. Allusions to hidden meaning, misunderstanding, decay, loss and distortion all reflect the challenges that interrupt linguistic interaction with perceived realities. With the world. The natural elements—forests and deserts, moonlight and darkness, birds and fish, bodies and sensations—are all wound with multiple threads of possibility. And those threads make their way back to the spark of human existence within this interrelated network, with the desire to step outside to articulate truths, but ever inside and unable draw distinctions that hold hard and fast.

Nothing holds firmly in these poems. Everything hangs in the air.

Before Lyricism by Eleni Vakalo, is edited and translated by Karen Emmerich and published by Ugly Duckling Press. At this time of writing it has been shortlisted for the 2018 Best Translated Book Award.

One thought on “Our way of being in danger is our way as poets: Before Lyricism by Eleni Vakalos”