The attempt to voice to the experience of reading Korean poet Kim Hyesoon’s Autobiography of Death echoes the challenge she found as the project began to take form for her. Death, as much as we may wish to avoid thinking about it, is a fundamental and natural part of life. But sometimes death arrives in unnecessary, violent, and horrifyingly tragic forms. Or simply when it is unexpected, or worse, unwarranted. The forty-nine poems that comprise the core of this work—one for each day during which the spirit wanders before re-entering the cycle of reincarnation—were written in response to those moments when Hyesoon felt the presence of death in some way. Although her intense reaction to the catastrophic collapse of a ferry carrying high school students bound for an island field trip—an event in which the crew escaped in lifeboats while the youth, ordered to their cabins, drowned—was a trigger, Korea’s recent history is rife with unjust deaths. How to reconcile all this? As an assembly of poems began to take form, she came to understand that her existence begins with death, not birth, and that we live our lives within the structure of death:

I thought to myself that I needed to sing to death, perform a rite for death, write death, then bid farewell to it. The way to send death away was to sing with my own death all the death in the sky and on the ground.

In essence, to sing to death, she had to allow her own death to take the poetic voice. To let it tell its story. How then are we to hear the songs gathered here? Quite simply, to read this book, is to listen. 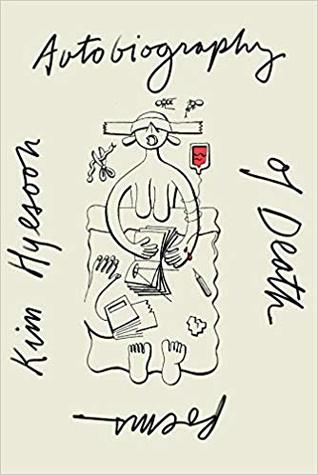 As one might imagine, the language and imagery is not always easy to encounter.  Heartbreaking, often disturbing, death does not necessarily come gently, and the spirit does not effortlessly shed its fleshy anchor. Verses infused with sad and tender tones mix with horror-filled prose poems and gruesome nursery rhymes, while songs of mournful remembrance turn strange and surreal. To move through this post-death journey is an odd and deeply compelling experience. At moments it is even exquisite:

You’ll see the mornings of the world all at once

Death is a bodied, intensely physical presence in this sequence of poems. Visceral and graphic at times. Certain images reappear throughout including water, dolls, winged beings—birds, insects and angels—mothers and children, coffins and burial. The space between death and rebirth is an icy, wintery one. Hyesoon shifts and builds on this imagery as the body is slowly and, seemingly reluctantly shed, transforming and decaying as the spirit is increasingly cut off from the world. The poetic perspective invites an intimate engagement with death:

The shape of a woman appears in the mirror. Now you’ve become toeless feet. Now you’ve become fingerless hands. You’ve become a noseless, mouthless face. Your insides that are so far away yet close, the forest in your hair, light enters the rocky moon, and the sea wavers in your shoes. Birds fly up your sleeves and a horse weeps in your pants.

As the forty-nine day passage draws toward a close, faces lose their distinction. Death erases names and identities. “You” lose the ability to recognize yourself or your place in the world. But who exactly is this “you”? In the conversation with her long time translator, Korean-American poet Don Mee Choi, that closes out the book, Hyesoon explains that she could not call her own death “I”, thus her death became “you”, but not as in a simple second person narrative. It is an intrinsically poetic space, such that “you” was “not I or you or he/she.” She goes on to describe how she began to wonder if the narrator might be a sixth or seventh-person narrator, and the “you” who is being addressed is “my death”—“I” has been killed. This she insists, is in keeping with what she sees as the only way to ethically practice poetry, by practicing the death of “I”. Of course, in reading, “you” also feels like “my” or “our” death. At times, especially with the poems that have a sing-song or nursery rhyme feel, it is not unlikely that one might be inclined to want to sing along.

The collection ends with an extended poem “Face of Rhythm,” a piece born out of meditation during a period of pain and illness. Filled with an aching intensity, it is a fitting follow-up to the forty-nine day sequence of Death, a laborious rebirth, release from facelessness and  namelessness. But renewal is hard won, a slow hallucinatory passage through sickness:

That feeling of my soul getting yanked
I wonder where my soul hides when I’m sick
My heart feels as if it’s getting beat up
Is it because the restless ocean is clumping up?
My heart beats regardless of the pain
It beats spewing out red thread like a red spider
A sinkful of red thread gets submerged in water
My heart beats like a girl marathon runner who only had ramen to eat

Autobiography of Death is a collection that leaves one alternately drained and exhilarated. I find it hard to imagine anyone would emerge indifferent. Translator Don Mee Choi’s strong affection and sensitivity for  Kim Hyesoon’s poetry is invaluable, while the playfully strange illustrations by the her daughter Fi Jae Lee contribute to the power and magic of this new work from one of Korea’s most important poets.

Autobiography of Death is published by New Directions.

5 thoughts on “Forty-nine days of the spirit: Autobiography of Death by Kim Hyesoon”