About a month ago I had an opportunity to talk briefly with Damon Galgut following his appearance at Wordfest here in Calgary. He published his first novel at 18 and I shared that I had wanted to write when I was younger but wanted to live first, completely unprepared for the messy and complicated path my life would take. So we spoke about the challenge of winnowing out a story that runs close to bone from the detritus of life lived. He pointed to my newly signed copy of In a Strange Room, his 2010 Booker short-listed novel, and admitted that in this, of all his works, he felt that he had most closely captured the essence of his self. And he achieved it, I later learned, by telling three tales which recount actual events from his life and feature a character named Damon from perspectives that often shift from first to third person to a detached observer, sometimes within the same sentence or paragraph.

So far so good. 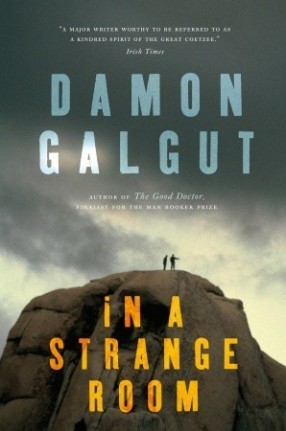 The first two sections involve travel and more or less unresolved interactions and attractions between the remembered Damon character and people he meets while he frets and wanders through parts of Europe and Africa with a restless inablity to settle himself. The prose is tight and evocative with the open ended reflections and ambiguity that feature in my favourite of his writings. But I was sucker punched by Part Three: The Guardian. Not only is it harrowing in its intensity, but the devastating action centres around a woman in the throws of a full-blown suicidal manic pychosis. I could not help but relate as a caregiver but more critically as someone who has experienced the full impact of manic psychosis from the inside. My blessing, if there is one, is that I have never been especially suicidal or inclined to self-harm, nor do I drink or use drugs. All of those factors are added to the mix in this account.

And it takes place in India.

It is not a secret that his close friend Anna is not in a good way, when Damon agrees to allow her to accompany him on the first part of a trip to India. He has been before and intends to stay and write for several months, but it is thought that the change of scenery might be a positive and healing experience for Anna. Her life is beginning to unravel around her and the creative, vivacious woman he has known for many years is tipping dangerously close to the edge. With a stock of mood stabilizers, tranquilizers and sleeping pills she promises not to drink or indulge in recreational drugs on this excursion – a vow sullenly defied as soon as they take flight. Her mood escalates, and behaviour becomes increasingly frenzied and unpredictable from there, culminating in an intentional overdose while her already weary guardian is close at hand but not paying close attention.

Throughout this process and the weeks that follow, Damon’s concern is stretched beyond affection to annoyance to guilt and back again. While Anna fights for her life in ICU, a British nurse and another couple from the village where they are staying are co-opted into a tag team to provide support and relief for Damon at the hospital where cockroaches and rats scurry about and, although care is free, all supplies from bandages to drugs to all other medical items much be purchased by friends or relatives who trek back and forth to the pharmacy with lists. As Anna begins to recover and relocate to more crowded and unattended wards, she not only becomes increasingly volatile and unpredictable, but her erstwhile crew of attendants have to attend to all her care including propping her over the bedpan and cleaning up the splashing mess afterwards.

Care for her actual mental health concerns is not part of the treatment plan.

To make matters worse, attempted suicide is a criminal offense in India and the police are awaiting Anna’s release so they can detain her. An escape must be planned and executed. Finally she is safely returned to South Africa, but she and her support network are shattered and strained at both ends. Sadly her successful suicide is only delayed, not avoided. And her traumatic spiral leaves those who love her and even those who get caught up in her whirlwind of self destruction, with wounds that will take their own time to heal long after she finally achieves the rest, or self martyrdom, that her illness drives her to desire.

My own manic psychosis was maintained to my home where the refrigerator filled with inedible meals and my children destroyed the yard while I struggled to make it through the days. As my grasp on reality slipped and the long standing issues I had been fighting off for years bubbled and distorted in my mind, a month of growing horror ended in a morning of escalating fear and violence before the ambulance finally arrived. Diagnosis and treatment of my bipolar disorder helped explain much, but in the end the very real issues of identity that had haunted me for most my life still existed. The difficult years that followed would see the end of a long marriage and, the beginning of a new authentic existence for me.

Anna was committed to death in her madness. In mine I found life.

I finished reading this book late this afternoon at a cafe where I frequently go to clear my mind and write. I could not put it down until I reached the final pages. As I stumbled out of the cafe into the biting cold and snow of this premature winter evening, I felt devastated and emotionally wrung out. As painful as it was to read, for those of us who live with manic depression or care for someone who does (and I do both), the third part of In a Strange Room is essential reading.

But consider yourself warned.