The green recedes like a hairline,
blue, blue is our future. And the rains
come like an ominous doorbell. And the fire
comes like a lion devouring, and the earth’s despaired-rumble
in her belly. Under muted breath, Hindus mutter pralaya,
a continent slips through an orifice,
glaciers slide innocently into the sea like a friendly
handshake, and we leave the seventh cause of
climate change nameless.

It is either coincidental or inevitable that I started reading Open Your Eyes: An Anthology on Climate Change on the same day the collapse of a Himalayan glacier and subsequent deadly flooding in Uttarakhand, India, made international news. I finished it to reports of the exceptional winter weather and power outages that left many Texans dead. Accounts of disappearing sea ice, habitat loss, raging fires, too much or too little moisture, extended tropical storm seasons and more have become a constant soundtrack, humming along beneath the chorus of a global pandemic, too insistent to ignore. Of course, countless industries and governments are doing their best to do just that, thus the importance of responses from a multitude of disciplines, including art and literature. 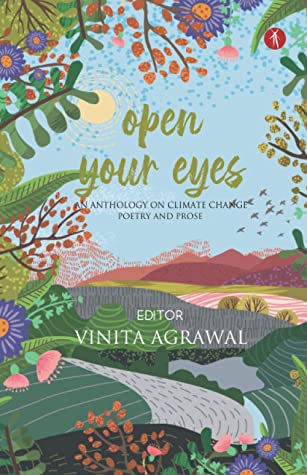 Open Your Eyes is one such effort. Edited by poet Vinita Agrawal and published in India, this attractive volume gathers poetic and prose reflections from a wide range of writers, from India and from around the world including Ranjit Hoskote, Ruth Padel, Abhay K, Anjali Purohit, Arundhathi Subramaniam, Ayaz Rasool Nazki, Barnali Ray Shukla, Esther Vincent Xueming, Indira Chandrasekhar, Kiriti Sengupta, Longbir Terang, Nabina Das, Priya Sarukkai Chabria, Sophia Naz and many, many more. For a concern so commonly associated with young western activists, this anthology offers a broader, more diverse response to the threats facing our planet, something that is by no means the province of the young. The oldest contributor here is ninety-two year-old Jayanta Mahapatra who offers a new poem, the mournful “I Am Today,” to the project. He joins sixty-two others raising their voices to call attention to the reality and risks of climate change.

It is November.
You know it from the susurration of light –
unclotted light, its guest-like tone
On my nephew’s face
the light is like a muscle,
quickening as he pedals.
The sweat still a secret –
armpits fold of private skin.

He’s seven,
as old as the ancient duration of exile.
The world’s grown warmer since his birth.
That is all I’m able to say
when he points to graffiti on the way –
‘What is Global Warming?’

Concern about the health of our planet and its inhabitants is hardly new. When I was growing up in Canada, during the 1960s and 70s and on into my university years, we fretted about overpopulation and starvation, pollution, acid rain and holes in the ozone. Today, as manmade threats to the earth are increasingly urgent, governments such as the provincial one I live under are almost hostile to the notion of “Global Warming” as if it is a notion dreamed up yesterday by nefarious enemies of Capitalism and the Economy. It’s not that simple.

Given the theme of this anthology, it is hardly surprising that natural imagery runs a strong course through many of the poems and stories that comprise this book—birds and insects, rivers and forests, floods and drought, violent storms and heavy silence. The gathered offerings are strong; these themes are explored with fresh energy, rarely slipping toward the cliched or the overly sentimental. Sorrow crossed with anger tends to be the driving force; an inclination to preach gives way to the power of the image. In Rohan Chhetri’s “Fish Cross the River in the Rain” for instance, the speaker and his father go down to a river where electrofishing is being practiced:

To stand on the wave-nipped bank as shoal
after stunned shoal heave their nets. The fish
wake older, dreaming brief new lives huddled
in a foreign prison gasping at each other’s
gills blinded like a sack of mirrors.

The poets and writers contributing their work to Open Your Eyes bring, along with love of language, a lived wisdom that informs their varied approaches to the theme. Theirs is a passionate and often surprising engagement with the crisis at hand—a willingness to engage with the past, speak to the present and envision the all-too-likely future, as Sudeep Sen illustrates in his striking “Disembodied” which opens:

His poem ends with a portrait of an ominous near future, or nearly present. The prose pieces which close out the book take, for the most part, a more explicit glance into a possible world to come, employing elements magic and speculative fiction to imagine more anxious allegories of what could lie ahead. Open Your Eyes is an important contribution to the growing literature addressing the reality of climate change, yet one has to ask, is a project like this a call to arms, or evidence that, in the wilderness, a chorus of voices were shouting even if we refused to listen? I know what it should be. 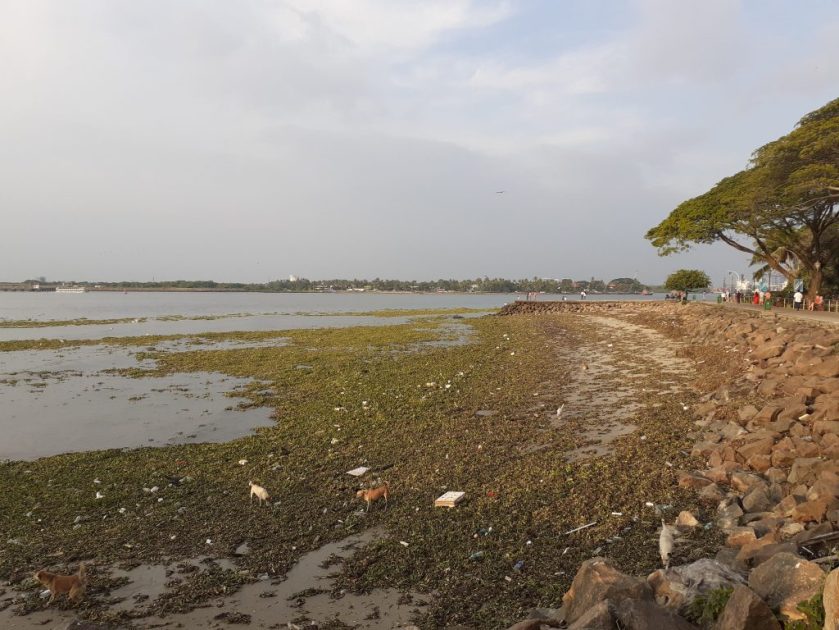 Walking along the beach in Kochi with a friend we watched dogs searching among the refuse, trash and plastic washed upon the shore.

Open Your Eyes: An Anthology on Climate Change is edited by Vinita Agrawal and published by Hawakal Publishers. I will confess that I ordered this book (which appears to be readily available outside India) because a number of my friends have work included within its pages, but that, in the end, turned out to be a welcome door to discovering many writers I might not have encountered otherwise.