“Venturing in there during the time of the stench would have been hell. I would have died of disgust. But I wasn’t scared of the room: given that setting a foot in there was completely inconceivable, its existence, so to speak, fell completely under the threshold of my perception. It was there, and yet at the same time it wasn’t.”

Set in the Wetterau, the fertile agricultural region north of Frankfurt, The Room by Andreas Maier marks the beginning of a proposed series of eleven memoir/novels exploring small town life in post war Germany. The reference point that launches this ambitious project is modest – the room that was once the private, darkened domain of the narrator’s uncle J. It may sound rather claustrophobic to begin with such a confined and specific space, but the spirit of this small novel as is expansive as the unfettered and innocent imagination of the simple minded anti-hero at its centre:

“This is the beginning that everything else stems from. The room, the house, the street, the towns, my life, my family, the Wetterau and everything else beyond it. My uncle, the only human being without guilt I have ever known. On his way into the real world, but with one foot still in paradise.”

As a consequence of a difficult forceps delivery, J would never shed the wonder and fleeting frustrations of a willful child as he grew into an adult. If it made him vulnerable, he didn’t notice. Incapable of feeling pain and always eager to fit in, he was unaware of the cruelty, physical and emotional, directed at him by his peers and by his own father. He lived in a world of fantasy – peopled with war heroes, mountain climbers, stone masons, crane operators, policemen, hunters. He loved to walk in the woods, could identify different birds, and seemed to have a special affinity for plants and animals. 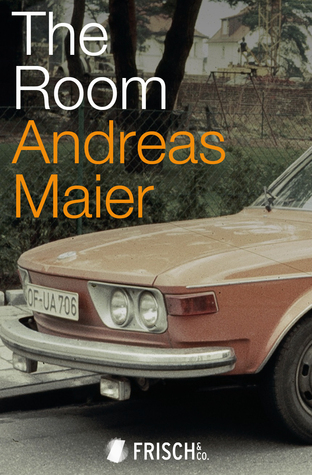 But perhaps, more than anything, he was deeply attached to his brown VW Type 3 Variant and, quite remarkably, he had a drivers license. Driving, for J, was a huge production which he took very proudly and seriously. He was a simple man living in a simpler time, but at a moment when the world was poised to enter a new global reality. In his experience, J existed at a time when workers still routinely drank before work, on the job and, of course afterwards; when smoking three packs of cigarettes a day, though as deadly then as now, was not discouraged; and when no one commented if you scooped five teaspoons of sugar into your cup of coffee.

“My uncle didn’t live a healthy life, that’s for sure, but then again it wasn’t really the fashion to live healthily back then – you could pretty much choose the way you would die, and it was usually the way you had lived.”

The narrative around which the The Room is constructed, with many segues and asides, is the imagined description of a typical day in the life of J, at some point during the year of the moon landing, 1969. The narrator himself is only two years old at the time, so he does not pretend to remember anything that he sets out to recreate. Rather, he builds on what he has heard of his uncle’s life, filtered through his own childhood memories of a foul smelling man who frequently annoyed him or made him uncomfortable, and the adult understanding and compassion that, sadly, came too late.

J’s day begins early with a walk to the train station. From there he catches a train to Frankfurt where he works at the postal depot, a job his brother-in-law, a lawyer, had secured for him after his father’s death. What he thinks of his job and how he fits in there is not known. After work he is pictured considering the advances of a prostitute in the Red Light district near the Frankfurt Train Station. Does he enter the brothel or hurry home? His nephew sketches out varied scenarios but, in the end, he does not know what goes on in J’s mind.

“In my uncle, therefore, you could alternately see either the triumph of nature over the law or the triumph the law over nature. In reality, though, he was positioned between the two, and presumably at the complete mercy of both, and that’s why the former Frankfurt Kaiserstrasse district offered the best opportunity to get to the heart of the matter. Germany the land of secrets. My uncle, the man of secrets.”

Upon returning home, Uncle J disappears for a nap, and then emerges to a list of errands that his family has devised for him… refreshing the flowers on the graves in the family plot, picking up his sister, delivering his mother to the hairdresser’s. He tries to resist his mother’s insistence that he shower, or a least clean himself up, a task that he pays less and less attention to as he ages. In the end he complies, driven by his ultimate goal – the hope that he will later be able to spend a few hours at the Forsthaus Winterstein in the company of the hunters he so admires. Every step of this recreated day is measured out within the framework and idiosyncratic order that J appeared to impose on his own life, imagined from the inside, but ultimately unknowable.

The narrative tone of this inventive balance of fiction and memoir is reminiscent of the filling and emptying of a time capsule. The narrator places himself into the scenery, his two year-old, pre-language self as speculative as his uncle’s world and possible mindset. Maier extends and condenses time – bringing a mythical quality to a world in flux, blending the simple man’s worldview with the adult narrator’s knowledge of how his uncle’s life will continue to unfold, and the way that the Wetterau itself will be transformed over the four decades that come to pass between 1969 and the present moment when he sits, in his uncle’s former room, now converted to an office, to commit this tale to paper.

The Room, translated by Jamie Lee Searle, is available from Frisch & Co, a publisher of electronic books based in Berlin. The next two installments in Andreas Maier’s series, The House and The Street are due to be released in the the spring of 2016.

8 thoughts on “In the era of the great ‘still’: The Room by Andreas Maier”