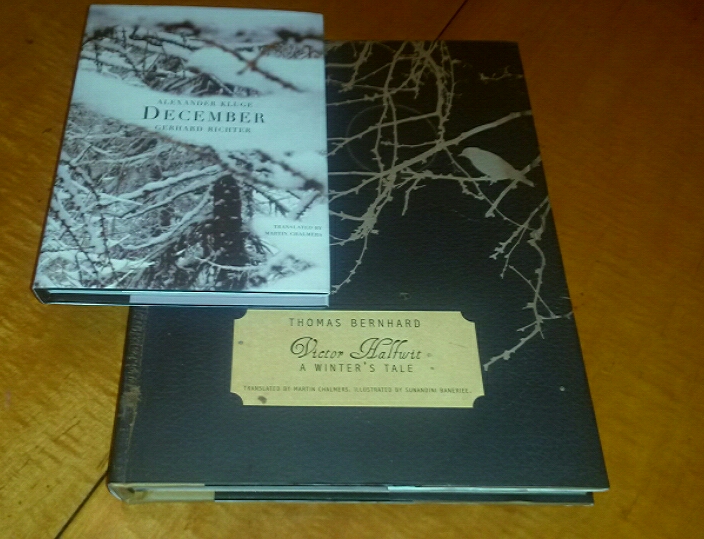 It may not be winter by the calendar (yet), but here, where I sit, north of the 49th Parallel and west of the Rocky Mountains, it is a perfect wintery day. The snow has been falling, no too much to be fair, but the wind has been playing with it, sweeping it into drifts and coating the roads with ice. A good day for a good book.

In recognition of the German Literature Month reading project that is drawing to a close this week (a growing list of over 120 reviews contributed by participating bloggers can be found here) I wanted to call attention to two very special books that not only feature German authors, but celebrate the book as a work of art. Both have winter themes and are published by Calcutta based Seagull Books.

Victor Halfwit: A Winter’s Tale by Thomas Bernhard is a short fable lavishly illustrated by Sunandini Banerjee. Listed in the Seagull catalog as “Children’s Literature”, I would suggest that this is, aside from being an opportunity to introduce a child to Bernhard early (and who would not want to do that?), a book to speak to the child inside. The story is essentially classic Bernhard. On a cold winter’s night, a physician crossing through the forest on his way to see a patient, stumbles, quite literally over a man lying in the snow. This man with the improbable name of Victor Halfwit is legless as the result of an accident and now, most unfortunately, his wooden legs have “snapped in the middle, as wooden legs do”, leaving him helpless and facing a miserable end. He had been on an ill-conceived attempt to win a bet with a miller who had wagered that he, Mr. Halfwit, would be unable to make his way from Traich to Föding, through the snowy forest, in just one hour, on his wooden legs. The faint chance of winning 800 schillings – the price of the finest pair Russian leather boots, something he had long desired – was too tempting, so Victor took the bet and nearly proved the miller right. Almost. But then, even a happy ending would not be without it’s bitter dark irony. This is Bernhard after all. 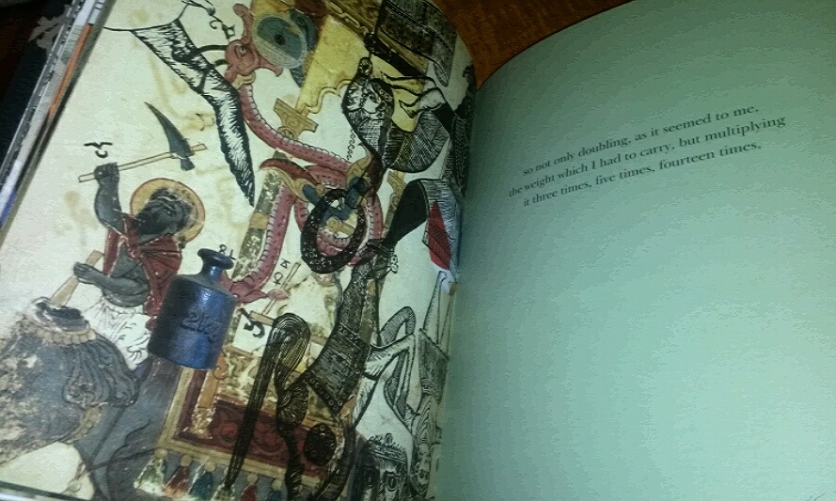 Taking a sentence or two at a time, this tale is presented in the company of rich, glorious collages. Drawing inspiration from famous artworks, medical illustrations, Indian imagery, playful designs and so much more, each page turned presents a new, original background to compliment the passage in quite unexpected and infinitely wonderful ways. I will confess that I ordered this book without paying much attention to the description. I knew it was Bernhard, I knew it was illustrated, but I was completely – and happily – caught off guard by this large, most gorgeous book when it arrived in the mail. I had expected something special, but honestly I had imagined something more modest. As a gift for a Bernhard fan or a lover of visual arts, or for yourself, let’s be honest, I would heartily recommend this book. 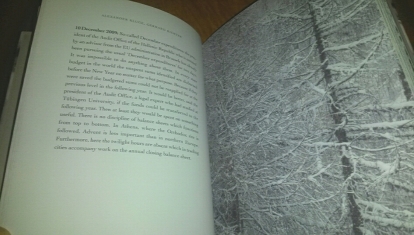 December is a take on the tradition of calendar stories that pairs 39 short texts by German writer, film director and critic, Alexander Kluge, with 39 haunting photographs of wintery forest scenes by Gerhard Richter. Included in this collection is a story for every day in December. Some are set during the war years, others in the 2000’s; some appear to have a straight forward historical tone, others seem more experimental in form. I can’t actually say because I intend to read this book throughout the month of December. Each entry is short, no more than a couple of pages at most. I bought this book with a gift card my daughter gave me for my birthday, thinking that it would be a welcome companion for the dark days – in a practical and an emotional sense – of December. Like many, I find it to be one of the most difficult times of the year and I look forward to exploring this work as the month unfolds.

Victor Halfwit: A Winter’s Tale and December are both translated from the German by Martin Chalmers and published by Seagull Books.