“We were leaving from La Guardia Airport New York, three hours late because of snow storms.”

Max Frisch’s 1957 novel Homo Faber begins with a matter of fact tone, an air of precision and efficiency. The narrator, Walter Faber, is a Swiss engineer traveling to Venezuela on behalf of UNESCO. Traveling is a way of life for him. But this trip, from the portentous delay on the runway onward, will mark the beginning of a systematic unraveling of a life bound to logic and technological certainty.

Faber’s account of his journey is spare and unromantic; he favours an exactness in his documentation, insisting that he is a practical, pragmatic man. He places, he tells us, no stock in “providence and fate”. Where others see chance, he relies on probability. Yet as a series of incidents appear to conspire against him, the laws and order of his heretofore measure of existence start to blur, to fall away in a stream of seemingly implausible circumstances. Even though he is obliged to admit that he has found himself caught in a flood of coincidences, he seems to hold to this as an excuse to absolve his part in the tragedy that ultimately unfolds. At least until that is no longer possible. 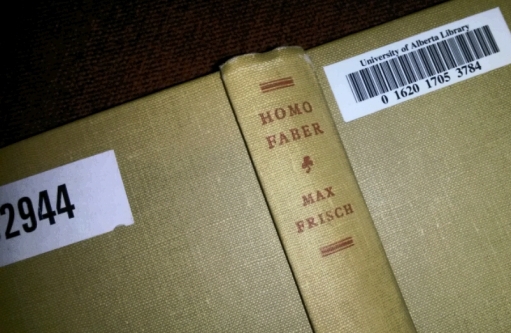 During a brief stop over in Houston, Faber, feeling overwhelmingly ill and anxious, makes an attempt to miss his connection to Mexico City. He is located at the last moment and ushered aboard. Before long, the plane loses one and then two of its four engines and is forced to make an emergency landing in the desert where the passengers will remain for four days. During this time he will discover that his German seat mate is in fact the brother of his friend Joachim, a man he has not seen in 20 years. Even more surprising, he learns that this friend was, at one time married to Hanna, the woman he once loved.

This unexpected resurrection of ghosts from his past knocks Faber off balance but he still manages to describe the tedious and brutally hot days spent waiting for rescue in a manner so unaffected and matter-of-fact that some scenes take on an element of the absurd:

“Towards evening, just before dusk, the promised aircraft arrived, a sports plane; it circled around for a long time before it finally ventured to drop the parachute – three sacks and two boxes that had to be collected from a radius of three hundred yards – we were saved. CARTA BLANCA, CERVEZA MEXICANA, good beer, even Herbert, the German, had to admit as we stood around with our beer tins in the desert, a social gathering in brassières and underpants with another sunset, which I took on coloured film.”

Once they are finally on their way, Faber will opt to make a detour to seek out his friend and in the process learn of his unfortunate fate. After his intended stop in Venezuela he then returns home to New York where he finds that Ivy, his mistress, has ignored his attempt to break off their relationship. Dismayed at the prospect of a week in her company he makes the impulsive decision to travel to his next business engagement in Paris by ship, rather than plane. As the ship makes its way across the Atlantic he will meet and fall for the dynamic 20 year-old Sabeth, a young woman 30 years his junior. He has, he assures us repeatedly, no idea that she is his daughter.

“What difference does it make if I prove I had no idea, that I couldn’t possibly have known? I have destroyed the life of my child and I cannot make restitution. Why draw up a report? I wasn’t in love with the girl with the reddish ponytail, she attracted my attention, that was all, I couldn’t have suspected she was my own daughter, I didn’t even know I was a father. How does providence come into it? I wasn’t in love, on the contrary, she couldn’t have seemed more of a stranger once we got into conversation, and it was only through unlikely coincidence that we got into conversation at all, my daughter and I. We might just as well have passed one another by. What has providence to do with it? Everything might have turned out quite differently.”

Yet, from this point forward, he is on a collision course with a destiny of Oedipal and tragic dimensions.

With Walter Faber, Frisch has created a character who engenders empathy, in spite of the taboo circumstances in which he ultimately finds himself. He is defensive, he equivocates, and he expresses opinions that, especially to our more socially conscious ears, sound dated, racist, and chauvinistic. They are, of course, in keeping with a man of his times, especially one so inclined to black and white reasoning. However with respect to women, Frisch intentionally places very strong, independent women in his protagonist’s line of sight – and they are the women who hold the deepest attraction for him.

The prose is brilliantly tight and restrained. Repetition and rhythm combined with shifts forward and back in time create a remarkable tension. Faber, as a man making a report on these recent events in his life, a critical accounting as we learn at the end, hides from his narrative only that which is hidden to himself – the depth of his own personal, emotional engagement. The result is a book that resonates with the reader long after the final page is turned. As our hero realizes, far too late perhaps:

“To be eternal means to have existed.”

Originally published in English in 1959, Homo Faber: A Report by Max Frisch is translated by Michael Bullock.

As a postscript, it’s worth noting that this book has no North American rights and, in Canada at least it is as rare as hen’s teeth. I ordered a copy from the UK in early February which has yet to arrive. The ante was upped when I was asked to provide a short “trailer” about this book for the upcoming Spring issue of The Scofield Magazine (Max Frisch & Identity). I ordered a second back up copy for $1, also still missing in action, and placed an inter-library loan request for one of the two copies held in this entire province. Apparently that route has an expected 5-6 week turn around, so getting desperate I finally had to have a librarian from the central branch coax the U of Alberta to find it on their shelves and courier it (at my expense) so I could read it and get my requested piece off by the end of last week.

Ah, but some day I will own two copies of this book! Good thing it’s a keeper.

22 thoughts on “The unmaking of Man, the Maker: Homo Faber by Max Frisch”