Thus ends the first page of Antonin Artaud’s last piece of writing, 50 Drawings to Murder Magic. Scrawled on notebook pages, this piece was written as a text to accompany a selection of sketches and fragmentary notations that he had been collecting for several years in small school exercise books. The sketches are frantic, the paper intentionally stabbed and tattered, the missives angry and disjointed. The ultimate design of this project, which was initiated at the request of art dealer Pierre Loeb, will never be known. It was interrupted by Artaud’s death in March 1948, two months after it was begun. 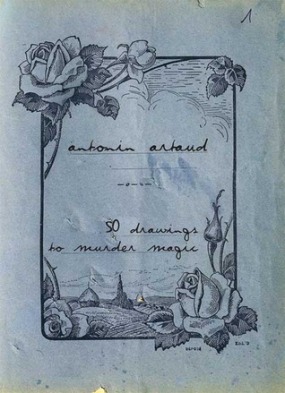 Artaud was a poet, dramatist, actor and theoretician, best known for his notion of the “Theatre of Cruelty”—an approach to experimental theatre that envisioned the removal of the barrier of the stage between the audience and the performers, and the transformation of the theatrical experience into a primal, mythic spectacle involving groans, screams and verbal incantations. In her preface to the Seagull Books edition of 50 Drawings, the editor, Évelyne Grossman, suggests that his drawings reflect Artaud’s preference, in his later years, for the “restricted framework of the small format.” His feverish drawings of faces, torsos, hands, totems, spikes and other undefinable shapes and scratches may be seen as a form of dynamic performance on paper:

“This is not to say that his intention is to breach the frame of the page, to escape its confines; rather he is seeking to break out within the sheet: to raise the paper surface, to dig down into it, to lend it volume, to open up its unsuspected depths and thicknesses. The pages dimensions are thus exploded. Writing and drawing alike are set in motion.” 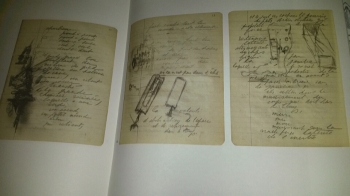 Originally associated with the Surrealist movement, Artaud had a deep interest in magic and the occult that extended far beyond that of his peers. He saw magic not only as a very powerful form of communication, but, he hoped, as a means to heal the deep rifts in his own troubled psyche. Plagued by mental health concerns, Artaud would spend much of his life in and out of asylums. Increasingly he was haunted by the demons of his own imagination and, as a result, it is intriguing to turn to his intense, often seemingly angry notebook drawings as an effort, as he puts it himself “to murder magic.” 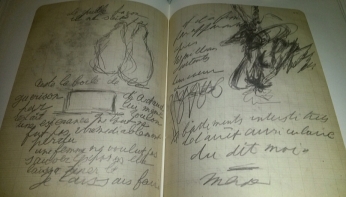 In entering this gloriously reproduced edition of 50 Drawings to Murder Magic, I turned first to the facsimiles of the drawings themselves—selected from notebooks dating from 1946 to 1948, and presented in the order chosen by Artaud himself—before turning to the poetic introduction (also reproduced with the accompanying facsimile). That approach seemed to suit my mood at the moment and rendered an extra impact to his words. Even though I was only able to recognize and understand about half of the text accompanying the drawings, the intensity of the imagery is undeniable.

Artaud himself insists that his images:

even an abstract one.

He proposes an interactive engagement with the words he has captured and illuminated on the pages of these notebooks. In and of themselves, he claims that they have no meaning:

To understand these drawings

into which these drawings

because they come from there

and because they are in fact

There is, I sense, in this commentary created to accompany these sketches a prescription that applies to the dynamics between words or images on the page and the reader or viewer that also applies to the creator. There is something in this text that speaks to the creative process—especially to the degree to which so much of what the writer or artist commits to the page (or canvass) extends from a place beyond conscious attention, to be received actively but without specific intention.

When I write and a reader finds their own answer in the work, to a question I may not have even asked, that is when magic happens. Artaud may have imagined that is drawings murdered magic, but his accompanying text indicates that the magic he believed to be the mediation between artist and audience was alive right to the end.

50 Drawings to Murder Magic is published by Seagull Books and translated from the French by Donald Nicholson-Smith.

5 thoughts on “Theatre on the page: 50 Drawings to Murder Magic by Antonin Artaud”