Before it came to an end one hundred years ago this November, The Great War, that rapidly escalating clash of empires—the Austro-Hungarian, Ottoman and Russian—would not only reshape the map of Europe and impact the distribution of power on a global scale, but fuel a new sense of national purpose and identity among the citizens of the countries pulled into the conflict either directly or by virtue of pre-existing alliances and obligations. It also unleashed, in very short order, the potential for destruction and violence on a scale previously unknown. With Austria’s declaration of war against Serbia on July 28, 1914, nations started to line up with their allies and declare war against one another. By the end of August, Germany, Russia, Britain, France and Japan were drawn in to a battle that was immediate, bloody and exhausting. And, as everyone soon realized, it was only just beginning.

It is easy to look back with hindsight, knowing the costs of this war and the ones that have followed, but in the opening moments of, and well into, what would become known as the First World War, the fervor of patriotism and passion to fight for God and country ran high. And this was well reflected within a realm one wants to imagine associated with “higher” ideals:

Despite its unparalleled horrors, the war had already produced something of immense value to humanity: namely, unforgettable poetry. This, at least, was one rather amoral commonplace from the early months of war. If poets had all too often been shut in their ivory towers, they were now quick to see that they could and must speak with the voice of the people. As Europe’s nations rediscovered their souls, they also rediscovered poetry. [1]

With few, cautiously voiced exceptions, the poets who responded to the unfolding drama of war, many of whom were themselves conscripted, were aroused with a new sense of purpose. Much has, of course, been written about this literary movement. Many collections and anthologies have been published over the years. However, one prominent, remarkably prescient poetic voice was raised against the prevailing sentiment, and his name is curiously absent from most of the annals and assessments of World War I poetry, such as the relatively recent text quoted above. In August and September of 1914, Slovak poet Pavol Országh Hviezdoslav composed a sequence of thirty-two poems, The Bloody Sonnets, expressing his passionate response to the growing hostilities into which his native country, as part of the Austro-Hungarian Empire, was bound. It has been largely overlooked. Now, a handsomely presented volume, published by the Centre for Information on Literature in Bratislava, seeks to bring renewed attention to this important collection of anti-war poetry as the centenary of Armistice approaches. 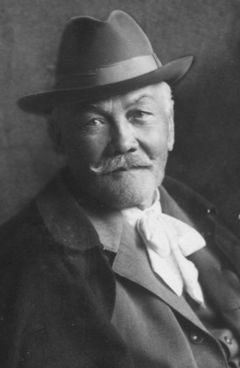 Born in 1849, Hviezdoslav  (a pseudonym appended to his birth name) worked as a lawyer and banker in Dolný Kubín in northern Slovakia before leaving his administrative career behind to devote himself entirely to poetry and translating. Writing in his native, endangered language, he was formally and thematically ambitious, exploring questions of Slovak society and culture, while weaving neologisms and elements of dialect into his work. At the outbreak of the First World War, he was sixty-five years old. While the poets and artists of Europe turned their attentions to creations charged with nationalistic rhetoric, his reaction was decidedly different. As one who aspired to a feeling of shared kinship between Slavic nations, the notion that Slovak and Czech soldiers would be called into action against Russia was deeply upsetting. With The Bloody Sonnets he set out first to decry the mounting bloodshed, and then to venture beyond that to imagine how the conflict might end.

In his introduction to this special edition, translator John Minahane marvels at the acuity of Hviezdoslav’s vision and his willingness to engage in a polemic against the prevailing poetic climate:

Hviezdoslav has such a powerful sense of the war’s scale and destructiveness that at first I found it difficult to believe that the Bloody Sonnets could have been written in August and September 1914. Surely, in their final version at least, they must be from 1916 or even 1917, when the full horrors had unfolded? Today when we read that “the human slaughterhouse is [everywhere: / on earth, upon the ocean,] in the air”, we are bound to think of how World War I introduced the most appalling form of modern warfare, aerial bombing. Already by 1916 there were signs of its potential: at least twice airmen killed almost one hundred people in single missions. But the aerial campaigns, though long-prepared, got underway only in 1915.

In reading The Bloody Sonnets, one is continually impressed by the vivid images painted, at this early juncture, of the blood-drenched reality of warfare. The first seventeen sonnets resound with an angry, at times despairing, evocation of the brutality, agony and immorality of this escalating tragedy—one so fundamentally at odds with the Christian values its perpetrators and champions are claiming to profess. The poet’s contempt is palpable, heightened by his adherence to a formal structure. The sonnets follow course, each one building on the intensity of the one before. His view is strikingly, terrifyingly universal. Take, for example, “Sonnet 13” where Hviezdoslav asks:

What caused this wreck, this brutal and ignoble
collapse of morals? What provoked the breach?
What led mankind, in spirit grand and noble,
to plunge in the mud? What vampire? Oh, what leech,

sucking the sap of life out of the breast,
constantly thirsting bloody parasite?
Ah, selfishness! — and to destroy this pest
today we have no troops, no heroes to fight.

Yes, it will twist and tear and rend, and fall,
a tyrant, on the weak and innocent;
although the world is wide enough for all,
it would have sole control of earth’s extent
and even possess the universe, no less,
pitching the other into emptiness —

Leading into “Sonnet 14”, his imagery, and his scorn, is unambiguous:

This puffed-up arrogance that’s dressed in iron
and, armed with lethal weapons, lurks in wait;
that bulks like stormy clouds on the horizon,
each move a threat, with wide eyes full of hate;

that hangs above the earth like punishment
and keeps peace powerless: it coarsely swears
that it fears God alone! — But this is meant
contemptuously: in truth it does not care…

Then, midway through the sequence the tone and energy shifts as Hviezdoslav turns his attention to the possibility of peace and the role that his own people, the Slavs, and most specifically his disadvantaged Slovaks, might have, in days to come, as a voice for justice. “Sonnet 17” marks the transition, as the poet wonders aloud if there is anyone who will stand up and call for ceasefire:

Whether your wisdom comes of silver years
or you’re a man in bloom, cry to them all,

“Enough!” — and you’ll be a champion of the world.
Offer your enemy a brother’s hand,
a white flag over red ruin unfurled!
Or… must the violence constantly be fanned

till it burns out?

It is not a question easily resolved, in real life or in verse. From this point onward, Hviezdoslav directs his queries to the Lord, looking to God for answers and guidance. These poems are filled with a Biblical humility that stands in direct contrast to the self-righteousness he challenges in the first half of The Bloody Sonnets. Cautiously he ventures to question whether lessons may be learned from this legacy of conflict and carnage. Yet, however sceptical he is about the salvation progress and civilization might offer, he wants to believe that God has higher plans:

— forever save the Slavs (Lord, hear my prayer!)
from being nothing but a heap of dung
on foreign fields, where the thin native layer,
craving fertility would have them flung. (“Sonnet 27”)

The fate of Slavdom, and of Slovaks in particular, is of abiding concern. He belonged to a tradition that had, during long years of cultural suffocation under Austro-Hungarian occupation, looked to Russia as their hope for liberation. But, because Russia had never committed itself to justice, he feared that smaller Slavic populations would be absorbed and lost within the larger entity. Ideally Hviezdoslav wants to see a Slavic Europe emerge in which each of the nations is allowed to maintain its uniqueness while benefiting from the association afforded by their shared kinship—a future in which the Slavic streams are allowed to follow their own courses without, as Pushkin envisioned, necessarily being merged into the Russian sea. 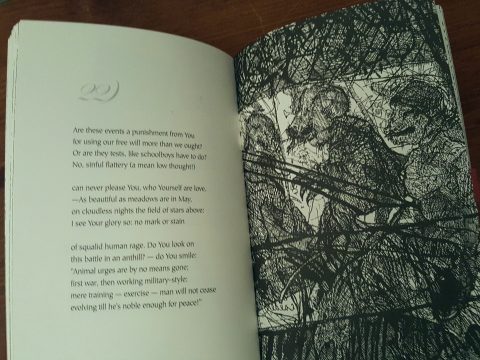 This powerful sequence comes to an emotional climax as, in “Sonnet 32”, as the poet bids his own bloody cycle of songs good-bye with the wish that that they may be “read by many a tearful eye”. As much a patriot as his fellow poets who were at this time still trumpeting the glories of war, his own desire is simple:

I too have had my inward battleground,
I too am wounded, and my heart’s pierced through;
just once to see my people and feel proud:
redress for all their injuries long due

As an opponent of the war, Hviezdoslav was at risk of being branded as pro-Russian and, thus treasonous. Consequently, The Bloody Sonnets existed only in limited manuscript and presented as performance pieces during wartime. It was not until 1919, two years before his death, that the sequence was finally made available in print. However, in the decades that followed, his work fell out of fashion and was forgotten. It is only in more recent years that Hviezdoslav’s rightful position of respect has been restored in his homeland.

This English edition of The Bloody Sonnets will hopefully go a long way to ensuring this important Slovak poet is finally recognized for his contribution to anti-war poetry more than one hundred years after he poured his heart into this cycle—his last great poetic project.  Translator John Minahane has taken on a formidable challenge here. Hviezdoslav, working within the constraints of the Petrarchan sonnet, was trying to express the intense emotions welling up inside. Rhymes are never easy to accommodate across linguistic borders but the results sing with overwhelming power, energy, and passion. 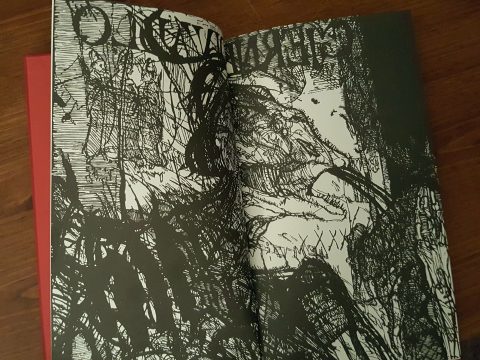 And then there are the illustrations. Artist Dušan Kállay’s black and white drawings practically burst with violence and depictions of evil. They speak to the senseless destruction of war without uttering a word—a perfect complement to a cycle of poems unjustly silenced for so long.

This title can be obtained through the Martinus online bookstore in Slovakia. The site is in Slovak but they are able to communicate in English and ship anywhere.

[1] Geert Buelens. (2015) Everything to Nothing: The Poetry of the Great War, Revolution and the Transformation of Europe. (Trans, David McKay) London: Verso Books