To be born is a fact. To be born in one period rather than another, as I’ve already said; and of this or that father, and in this or that condition; to be male or female; in Lapland or in central Africa; and handsome or ugly; with a hump or without: facts. And if you lose an eye, it’s a fact; and you can even lose both, and if you’re a painter it’s the worst thing that can happen to you.

Time, space: necessity. Fate, fortune, chance: all snares of life. You want to be, eh? There’s this catch: in abstract, you cannot just be. The being must be trapped in a form, and for some time it has to stay in it, here or there, this way or that. And everything, as long as it lasts, bears the penalty of its form, the penalty of being this way and no longer being able to be otherwise.

In a world obsessed with identity politics, there seems to be a considerable currency placed on defining and understanding oneself in relation to others. To be authentic. But implicit in claiming, or rejecting any identity, is the assumption that we can know our own selves, and have that knowledge accepted and validated by others. Yet what if that is impossible? What if the image we have of ourselves is at once entirely singular, unverifiable, and at odds to some degree, great or small, with the multitude of images everyone else has of us? 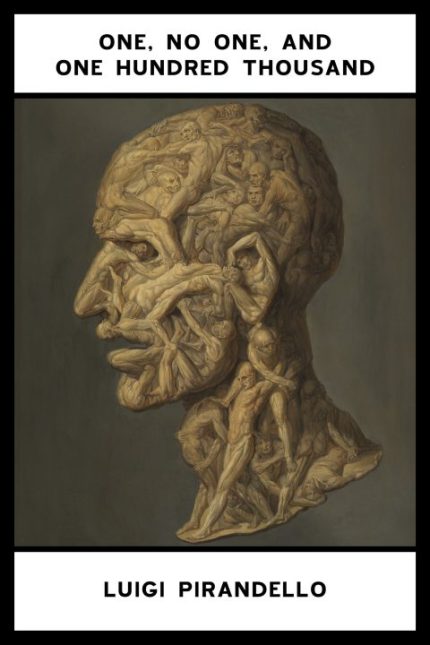 Then you have the crux of the crisis that befalls the protagonist of Italian writer Luigi Pirandello’s classic 1926 novel One, No One, and One Hundred Thousand, newly released by Spurl Editions, the inimitable little US publisher of nearly forgotten literary and photographic treasures.

The premise is simple, if, at first blush, a little contrived. The narrator, Vitangelo Moscarda, is a proud but unambitious twenty-eight year-old, heir to a considerable fortune, who is content to allow others to manage the bank his father founded while he enjoys a life of self-satisfied leisure in the town of Richieri. One day, while he is examining his face in the mirror, his wife offers an unexpected observation about his nose—it tilts to the right—and, wounded by this previously unnoticed imperfection, he quickly finds more to fault: his eyebrows look like two circumflex marks ^^, and his ears are poorly placed, and examination of his hands and legs revel further defects. An innocent remark thus sets off a crisis of identity that quickly escalates, ultimately ending with the complete psychological dissolution of character. As his grasp of reality spins out of control or, perhaps, becomes so precise that he can no longer surrender to the illusions that had previously buffered his existence, Moscardo carefully details the progress of what he calls “his sickness” and the remedy he believes will cure him of it.

Since he first becomes aware that his own view of himself is lacking, it troubles him that his wife is apparently in love with someone else—a construct of him, “her Gengé”—whom he now can only pretend to be. He blames his passivity and indecisiveness on a fault in his character and upbringing:

Unfortunately, I had never been able to give any sort of form to my life; I have never firmly wanted myself to have an individual nature, on my own, both because I had never encountered obstacles that aroused in me the will resist and to assert myself somehow in front of others and myself, and because my spirit tended to think and feel also the opposite of what it thought and felt the moment before. It tended, in other words, to dismantle and separate in me, with assiduous and often opposing reflections, every mental and sentimental formation. And then, finally my nature was inclined to yield, to give way to the discretion of others, not so much out of weakness as out of indifference and resignation in advance to the troubles that could then come to me…

The more he thinks about it, the more he comes to resent the way she manipulates this other version of himself, and grows jealous of this shadow of a being who has now come between them. The one she really loves. He has begun to disassociate.

The narrative is presented as a dialogue of sorts with an audience, the protagonist anticipating objections, inviting attention to certain observations and considerations. Pirandello (1867-1936) was a prolific playwright, and this interactive form of monologue reflects that. But this is an intense and deeply internal journey, one that, once in motion, the narrator is unable or unwilling to halt—even as he is aware of the self-destructive nature of his actions. After all, “self” destruction is his ultimate desire. If he is simultaneously one, nonexistent, and a multitude, he reasons that he should be able to break his various selves apart, shatter the impressions others hold of him—prove that he is not what they think he is.

The scheme Moscardo concocts leads him to engage in irrational, cruel and reckless behaviour and, of course, his goal is not appreciated. Because he has become especially concerned with the widespread reputation, inherited from his father, that he is a usurer, he turns his attention to the financial affairs of the bank in an especially reckless manner. And when money is involved, everyone pays attention. But not in the way our poor hero imagines. His friends and family respond by seeking to have him declared incompetent, a fate he is keen to escape.

Following Moscardo’s misadventures is akin to witnessing an existential train wreck. However, his insights into the limitations of self-awareness, and the nature of being in the world are profound. And, his observations of others are, for a narrator whose world falls apart with the  revelation of his own physical flaws, filled with vivid, typically unflattering, detail:

To judge by his appearance, Canon Sclepis didn’t seem to contain all that power of authority, that stern energy. He was a tall and thin priest, almost diaphanous, as if all the air and light of the hilltop where he lived had not only faded him but had also rarified him, and had made his hands almost transparent in their tremulous frailty and his eyelids finer than onion skin over his pale oval eyes. Tremulous and faded was his voice, too, and his smiles were empty on his long white lips, from which often a little blob of saliva would hang.

In navigating a very fine line between wisdom and madness, Pirandello has, in Moscardo, crafted a protagonist who is complicated, tragic, and strangely sympathetic.

Most famous perhaps, for his plays  “Six Characters in Search of an Author” and “Henry IV”, Pirandello was known for his ability to parlay his acute psychological insight into entertaining drama. That talent was recognized with the 1934 Nobel Prize for Literature. But he was also an important novelist and writer of short stories. This, his last novel, took him more than a decade to complete. Although it harvests territory familiar to Pirandello’s greater body of work, the tone is pessimistic, the style spare and the setting abstract. In that way it foreshadows the Theatre of the Absurd, in particular the work of Samuel Beckett. As translator William Weaver notes in his introduction, One, No One, and One Hundred Thousand was not well received when it was first released. It was, he suggests, ahead of its time. In 1990, when this translation was initially published, Weaver recognizes that “(t)he terrible honesty of the novel and its protagonist has, with time, become all the more desirable and impelling.”

How then, will today’s identity obsessed climate respond?

An excerpt from the opening chapters of One, No One, and One Hundred Thousand can be found at 3:AM Magazine.

7 thoughts on “A chronicle of madness? One, No One, and One Hundred Thousand by Luigi Pirandello”