What can a language reveal? What can it obscure? If your memories were birthed in one culture, can they be retrieved elsewhere? What is gained and what is lost when you migrate from one land to another, from one language to another? How does this shift affect the spelling and the telling of a life?

Wittgenstein’s aphorism: ‘The limits of my language mean the limits of my world’ is false; there were thoughts that lacked words. We doused ourselves in neologisms. Dorothy repeating ‘there’s no place like home.’ A memory burn: the first time I saw a man kissing another man. (from Chapter 9)

The thirty-nine part prose poem that comprises Australian poet Harold Legaspi’s pocket-sized volume Letters in Language seem to dance around these questions, indirectly entertain them. Flirt and tease. Lean in closely. Look away. Catching, again and again, his own reflection. 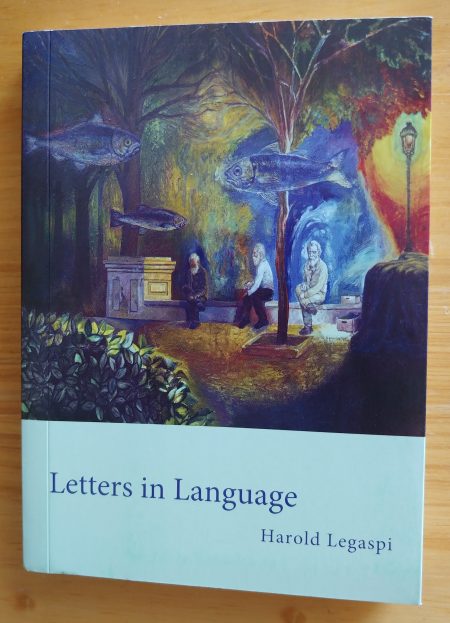 Drawing inspiration from American Language poet Lyn Hejinian’s My Life, Legaspi has entered into his own experimental autobiography. Hejinian’s ground-breaking work, as published in 1980,  featured thirty-seven non-narrative prose poems, each thirty-seven sentences long—one for each year of her life at the time of writing. A second edition, revisited the project, growing with the poet, to forty-five pieces of forty-five sentences each. These sentences refuse direct connection to one another, defying the sequential illusion of conventional life writing. How do we remember ourselves? In fragments and moments, yet somehow, through the translation into language, patterns  and a sense of wholeness emerges. But is it real?

To read My Life is to let the words, the sentences, flow over you. There is a continuity of voice, and of the nature of images that interconnect when memories arise—details of a childhood for example may include activities, rooms, sounds, objects, and observations from a mature vantage point—but the intentional corralling of these images into narrative form distorts the truths it endeavours to preserve. The reader is invited, not to interpret and decode, but to respond from their own experiences of life.

Letters in Language mines a similar domain—life lived—but within the context of a Filipino family, a displaced culture, and multifaceted  questions of identity. I don’t know the author’s age at time of writing, but he does not hold to constraints of length. Legaspi’s language is playful, sentences often clipped and short, with images drawn from pop culture, even current realities like Covid-19 tossed in. The lines tumble over one another, appear connected for a stretch and then not, punctuated with aphorisms, self-reflection, rhetorical questions. The sentences have a transitory relation to one another, as if meaning is, at any single moment incidental and yet sensible. Not unlike the way the fragments and pieces of our own lives are shuffled and reordered each time we pull a memory card from the deck. New contexts constantly reshape who we think we are, refashion our ever-fluctuating histories.

Ever present amid the poems that fill these pages is the author’s lola—his memories of his grandmother fuel his own. The opening sentence reads: “My lola swept autumn leaves with walis tiniting, burned them in a can, wearing her grand billowy housedress.” Walis tingting is a Tagalog word for a broom constructed of coconut midribs. It sweeps its way through Filipino households. Likewise, the expression sweeps its way through these poems—a recurring image or an action that seems to signify the way we sweep through our memories, sweeping some to the forefront, others under the rug.

I who thirsted for knowledge. My niche unknown. Underneath the black economy. Where dry spells quelled my dysphoria. Fixed under the shade of a Bodhi tree. Away from air-conditioned air. Reborn. Conquered. A tangential awakening. Slid straight through, vagina dentata. The tip of my bayonet inched in her spine. Folk tales whispered, they got rid of me efficiently, like a baby out with the dingo. My mother, no shrinking violet. Did what was necessary. To cover up the blame. Walis tingting. As for the men, whose words were carefully chosen—passed on their phobias. My uncles. After thirty-nine years of solitude. Raised me like their own. Classed as a freak, unable to procreate like their sons and daughters (from Chapter 26)

So who is the “I” who lurks in this extended prose poem? A poet who exposes himself through his passions—emotional, intellectual, sexual and spiritual—played out against a formative soundtrack of music, films and books; bound by friends and lovers, and framed within a multigenerational Filipino family. Letters in Language never drifts far from the unresolved reality of the migrant existence, from the feeling of being defined by and yet disconnected from a land that is now somehow alien. After his grandmother, his unaltered link to the Philippines, has passed, Legaspi becomes aware of a kind of anchorlessness. One that rests in language, between a present language that cannot contain the loss, and an ancestral one not comfortably in hand: “Where English was an oblique mirror to my alter ego. I found myself faint with anxiety, a fictional object my truth. A truth with no original, veiled, forsaking to journey where it all began.”  The need to acknowledge this fundamental lack of grounding is then reflected in the closing sections of this text. Chapters 34 to 37 are composed almost entirely in Tagalog, a shift accompanied by translated versions. Thus, of all the questions of identity that surface and resurface throughout this poem, it is the poet’s own bilingual identity that troubles the deepest waters. Casting uncertainty on what has come before. What, if anything, has remained unarticulatable? Lyn Hejinian’s original autobiographical project is essentially unfinished, with material appended over time. Like life. What of Letters? That is not a question to anticipate in advance. Like life.

Letters in Language by Harold Legaspi is published by flying island books, ASM, and Cerberus Press.

3 thoughts on “Troubling the alphabet: Letters in Language by Harold Legaspi”