Stories that begin at the end don’t need beginnings that would convict them of making a point, that is, of committing a falsehood. A falsehood that loses its falsehood, being turned inside out by the truth, as if that were possible at first sight. But in any subculture there are other rules and privileges accorded to others that permit them to fire off viruses at everyone else, as if all that was at issue were the odd truth. As indeed is the case.

After what seems an impossible delay, and an unthinkable series of detours, Agnomia by Slovakian writer Róbert Gál is finally available in English, only a decade after its original release. I originally encountered Róbert’s writing in 2015 with what was, at the time, his first published work of fiction in English, On Wing (Dalkey Archive). After that I slipped back  to what was, at the time, his only other available translated book, 2003’s more explicitly philosophical Signs & Symptoms (Twisted Spoon Press). I have to confess that these two volumes served as important inspirational triggers for my own writing, and Róbert has become part of my far-flung circle of literary friends. He is, however, stubbornly reticent to talk about his own work, so I have no advantage in crafting my response to this text which fits, chronologically speaking, subsequent to Signs & Symptoms and On Wing, holding thematic ties to both, but standing uniquely as an attempt to offer a solid, singular prose piece, albeit one that disrupts the lines between fiction, memoir, and philosophy. 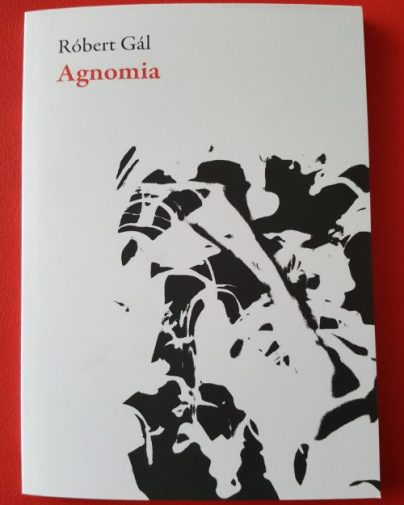 Unfolding in a single, unbroken paragraph, Agnomia runs to just under 80 pages. The narrator is, as one would expect, a Slovak writer named Róbert Gál. But where the enigmatic author and his fictional alter ego converge and diverge is unclear; it’s not even clear that they know:

For the author wants to tell his tale, but doesn’t know where to begin, and he doesn’t even know if there is a tale to be told at all. He tries to get inside it, as if any entrance on his part would automatically coordinate with the context in which the tale is being played out. Coordinate with what is being played out, whatever that might be, on a parasitical basis, though it’s erroneously taken to be symbiotic.

This metafictional segue that arises in the early pages of the book is not sustained, the narrative “I” soon takes centre stage, such as it is, but he is an impatient, introspective, and alternately obsessive and ambivalent participant/observer/chronicler, inclined to lapse into philosophical musings. If the story does, in fact, have a beginning and end, it seems to be in New York City, with plenty of Prague in between. But this tale is circular rather than linear. Our author appears to be piecing together his account as he goes, fueled by memories and dreams, however ambiguous and unformed. The result is an meandering prose poem, regularly folding back on itself as if to take stock of its own ability to write itself into being, a post-punk Bernhard monologue set to an erratic thrash jazz soundtrack, playing out inside the mind of a mildly neurotic writer.

And that mindscape is a busy place. Old friends and passing acquaintances, former girlfriends, fellow artists, even the author’s parents pop in and out, arising in fractured conversations, their off-hand gestures observed, their habits briefly dissected, their otherness serving as springboards for the narrator’s digressions. The men are analyzed and compared, while women are allowed a certain magical leeway, like L., a former lover whose diaphanous nudes he’d “used in another book of aphorisms” (see Signs & Symptoms). But between them all, the narrator, seems to be navigating ghosts, remembering encounters, propelled by his own recurrent personal and philosophical obsessions. Nothing is fixed fast in time, lines of thought spin off in all directions, always circular in motion with a relentlessly engaging force.

Driving the narrative are several persistent themes: an underlying bitterness about the futility of being involved in the creative process, especially as a purveyor of words, and more explicitly as the citizen of a small, insignificant country like Slovakia (where “a poet is dead before he’s even born”) ; a fascination with the curious dynamics of romantic and sexual involvement; and a penchant to wander down metaphysical and epistemological wormholes, get tangled up in tautologies, and play with words:

I’m gazing at a tree-shrub hastily planted in a demolished square. I want to tie the moon in with it so that the image I’m creating looks fully formed. It’s a full moon. Is it fulfilled? My room is inhuman. It isn’t accessed by a door, but by clockwork, with a key poking from outside in. A bit like a deep intake of breath whose exhalation and exhaustion are identical. Music has an instant effect. That’s something it shares with a drug or a telling aphorism. Circular self-relocation, each time a total gyration round one of a pair of aching legs. Oneness with pain like a fly with a wing torn off. The whirling of a whirligig beetle. Extirpation of redundancy by stretching it on the rack of a thing that at that instant is no longer a problem.

The flow of accounts, anecdotes, aphorisms, and anxieties continues unabated from end to end of this slender, philosophical fiction, inviting and rewarding rereading—as is typical of all of Gál’s other writing. The abiding presence of his holy trinity of influences is increasingly evident with each re-encounter: Thomas Bernhard, Georges Bataille, and the wildly prolific and ambitious avant-garde composer John Zorn. Readers familiar with the author’s aphorisms and other published work will recognize strong cross currents running throughout Agnomia, but the tone here is lighter, the logical challenges more accessible, and more of Gál’s spirit and humour comes through. The “truth” of fiction? Who knows?

The “stories” or memories that form the loose, fractured framework of this book support what is, in fact, its beating heart—the endlessly unanswerable questions about the nature of thought, truth, and the possibility of adequately representing reality. The balance of narrative—fiction or memoir, it matters not at all—against the narrator’s musings and meditations is pitch perfect. An account of an evening out with a woman, for example, leads to further considerations:

“We’re going now,” I say. I might have helped her break free from certain stereotypes, but she didn’t need my help. She might have helped me break free from certain stereotypes, but I didn’t need her help. Repetition is reminiscing ahead. Ineffectual dreams don’t exist, so the unconscious is more effectual than consciousness. And since my pain doesn’t follow from the findings of philosophy, the question is: In what respect can clarification of the cause of my pain be aided by the findings of philosophy? In being accountable for anything’s enduring, since for what else can one be held accountable? This raises more questions: To what extent can the consciousness’s accountability for something enduring be its consistent monitoring of it, and to what extent is the monitoring of what endures even conceivable and admissible? Is every story a manipulation? And so forth.

At the end of the story we have more questions than answers and that’s the point. After all, what truths lie in the thoughts we think we have?  And is it possible to express them, or is all creative process dependent on our own inherent ignorance?

Agnomia by Róbert Gál is translated from the Slovak by David Short, and published by Dalkey Archive.