The bell rings, we get up. The bell rings again, we go to bed. We retire to our rooms; we saw life pass beneath our windows, observed it in books and on our walks, watched the seasons change. It was always a reflection, a reflection that seemed to freeze on our windowsills. And perhaps now we saw a tall marbly figure stand out before us: it is Frédérique passing through our lives and maybe we’d like to go back, but we don’t need anything, anymore. We imagined the world. What else can we imagine now if not our own deaths? The bell rings and it’s all over.

Switzerland, the Appenzell: the area where Robert Walser took his walks, including his final snowy outing, and the location of the boarding school where the narrator of Fleur Jaeggy’s hauntingly pristine first novel is living, at the age of fourteen. She regrets that they didn’t know of the writer’s existence at the time, but the perfection of his death, and the season, set the tone for the story that she is about to share—a chilling winter tone that persists even as the months and years pass and the harsh, spare beauty of Sweet Days of Discipline works its way right through to the bone. 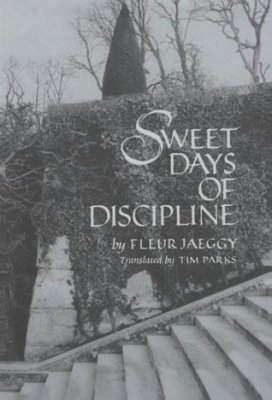 This novella is marked by a tightly controlled narrative voice. It is a tale of obsession. There is little action, it is the narrator’s emotional intensity that drives the story forward. Looking back on the years she spent in a series of boarding schools, from the age of eight to seventeen, she zeroes in on this one particular year, at the Bausler Institut, where Frédérique—beautiful, remote, and obedient—first entered her life. She sets out to conquer this newcomer who, only a few months older, has come from the outside with a certain detached worldliness that instantly sets her apart from the other girls.

The narrator, whose education is directed, long distance, by her mother in Brazil, is a seasoned veteran of boarding schools where, as she puts it, “a sort of senile childhood was protracted almost to insanity.” She knows the game, and how to play it, which she does with a healthy measure of cynicism:

Part of your education is learning how to thank with a smile. An awful smile. There is a mortuary look somehow to the faces of the boarders, a faint mortuary smell to even the youngest and most attractive girls. A double image, anatomical and antique. In the one the girl runs about and laughs, in the other she lies on a bed covered in a lace shroud. It’s her own skin has embroidered it.

She is, however, only an average student—a fact that does not trouble her at all. At one point she admits that all she remembers from her school years is Baudelaire. No surprise. She seems to have almost absorbed his dark poetic soul. Her narrative is liberally strewn with metaphorical references to graves, coffins, corpses, and death.

She befriends Frédérique, in good part because the others find the new girl too distant, and keep their distance in return. They take walks together, and she listens with sometimes exhausted attention, as Frédérique talks of literature, philosophy, and travel. Her own obsession borders, she supposes, on love. But it is a chaste, almost brittle affection.

There is a simmering violence that runs beneath the surface of the narrative. The narrator, long neglected by her own family, harbours a bitterness that colours her detailed, frequently nasty, appraisals of the appearance and idiosyncrasies of others—the headmistress and her husband, her German roommate, the little black girl, and more. When Micheline, a gregarious new student arrives, she suddenly turns her back on her precious Frédérique, more it seems, out of a sadistic streak than affection for the newcomer. She registers no remorse until Frédérique’s father dies, causing her to leave the school for good.

This novella is filled with conflicted, often dark, emotion. The tension lies not so much in what happens, as in the sombre frostiness of the prose. Frédérique, it turns out, is deeply troubled; however, the nameless narrator, is perhaps more unsettling and tragic. Either way, the result is a tale—captured so deftly in this translation by Tim Parks—of stark, poetic beauty:

I persevered in the pleasure of taking my sadness to the limit, the way one does with some practical joke. The pleasure of disappointment. It wasn’t new to me. I had been relishing it ever since I was eight years old, a boarder in my first, religious, school. And perhaps they were the best years, I thought. Those years of discipline. There was a kind of elation, faint but constant throughout all those days of discipline, the sweet days of discipline.

Fleur Jaeggy is an Italian speaking, Swiss-born writer. Sweet Days of Discipline is published by New Directions. Two newly translated works will be coming out, July 2017, from New Directions in North America and And Other Stories in the UK. (Sweet Days of Discipline is now available outside North America from And Other Stories)