“The brook here in the forest – where did it begin —
Don’t think like that!
Not about beginnings and endings, but just about what is.
Throw in a stone and make time stop.”

The passage of time, the flow of seasons, the repetitive routine of life on the farm – these are the currents that course through The Ravens, the English-language debut from Swedish author Tomas Bannerhed. The landscape is rugged and raw. The land, reclaimed from peat bogs, is stingy and unforgiving. The weather is harsh and unpredictable. It can break a man’s back and, if he is not careful, it can drive him mad. 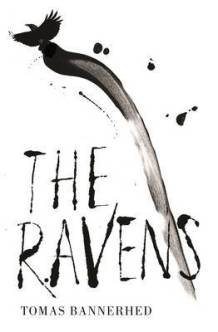 The events of this dark rural novel unfold over the span of one year from spring to spring. Our narrator, Klas, is a sensitive and intelligent 12 year-old boy with a passion for birds. His ear is finally tuned to the songs and calls of the species that nest in the trees and marshlands near his home, he knows their habits and is on the lookout for the chance visitors who may happen to appear outside their normal range. Birds are not only an obsession but a refuge and distraction from the pressures at home.

Klas has a troubled relationship with his father who, as the year progresses, is clearly losing his grip on reality. Ange is haunted by the cries of ravens that only he can hear. He constantly worries away at a huge pile of scrap metal and bemoans the endless work that weighs down on him on the farm. The more he complains and beseeches the Lord for the trials he suffers, the more he drives his older son to the marshes. Klas’ mother exercises a weary stoicism, continually working to pull her family together, while his younger brother spends much of his time retreating to increasingly juvenile behaviour. Hanging over the family is the legacy of mental illness. Klas’ grandfather committed suicide, his father is becoming more unpredictable and eccentric, and, in his heart, Klas is terrified that he too will inherit both the farm and the madness.

The summer sees a hint of respite for young Klas as the attentions of Veronika, an attractive girl from the city, set his hormones reeling. True to form he takes her on a late night birdwatching outing, but she disappears to the city soon after. Before long Ange overdoses on pills and is committed to a psychiatric hospital. As his father fades, Klas will be forced to question whether he will be able to carry the weight that will be placed on his shoulders. And as Klas appears to be pursued by voices and superstitions of his own, the reader has to wonder if he is not already haunted by demons. An eye he imagines above his bed disturbs his sleep, the voices keep driving him to the marsh’s edge.

“Stare down into a mirror.
No sign of life. Just my own blurred face and the tiniest ripples if you looked really carefully, like vibrations in the air from the silently whirring wings of the circling gnats. A pond skater came shooting across the water on its sewing-thread legs. Here and there, gas bubbles percolated gently to the surface and popped with a wet sigh.
Is that all?
No toothless Marsh Wife leering down there, no long arms and yellow nails like claws to draw you down into the black hole?”

There is much to love in this novel. The landscape comes alive. The language is achingly beautiful and spare, smoothly translated by Sarah Death. As someone who grew up in a rural environment in the 1970s, I found that the cassette tapes, aging hippies, and city fashions that Klas encounters when he visits Veronika brought back memories. The darkness that seeps through and builds as the story progresses is well managed. My only criticism would be that I felt it might benefit from being edited a little more tightly in the first half.

Independent Foreign Fiction Prize 2015: This is certainly one of the more ambitious of the long listed novels and I would be pleased to see it make the short list.