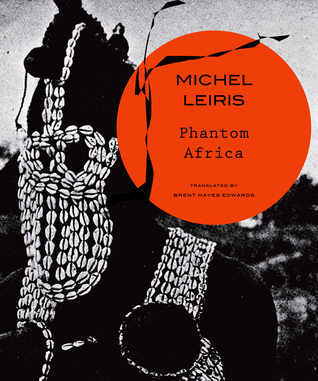 It’s no secret to my literary friends that I have been somewhat obsessed with French writer Michel Leiris this year. I will address this fact further at a later date, but essentially, it is his autobiographical writing that fascinates me—it’s a very internalized, yet sharply observant form of writing about language, memory, and experience. In his epic journal project, Phantom Africa, a detailed, personal record of his experience as part of the Dakar-Djibouti ethnographic expedition in the early 1930s, one see him develop as a writer as the weeks and months past. With a background as a Surrealist poet and an essayist, he was a strong writer at the outset; what evolves over the course of the journey is an uncanny ability to lay himself open on the page with a distinct, idiosyncratic honesty. A discussion of this development forms the primary thread of my review of this critical work, published earlier this week at 3:AM Magazine.

However, the publication of this valuable document  in English, at this point in the ongoing post-colonial narrative, holds an importance that I only allude to in my critique. Leiris’ primary role on the expedition was as secretary-archivist. Ethnographic study was, for all intents and purposes, a mechanism of colonial control and exploitation. Thousands of artifacts, many with profound cultural and spiritual meaning, were collected for display in museums back in France. Some items were purchased, others taken by force or deceit, but in the end, it was all facilitated by an exercise of the power of the colonizer over the colonized. Leiris is not unaware of this fundamental inequity and he does express considerable concern and discontent with the ethics of the entire colonial enterprise, but he also admits to enjoying the thrill of the raid. Of course, it is not appropriate to measure a man outside the context of his times. Leiris’ true gift here lies in is his candid, unedited, record of the events he knows of or takes part in. It forms a vital contribution to the argument in favour of the repatriation of lost art and artifacts to Africa.

Phantom Africa, translated by Brent Hayes Edwards, is published by Seagull Books. My 3:AM review can be found here.

9 thoughts on “Some thoughts on Michel Leiris’ Phantom Africa and a link to my review at 3:AM”