The following is a re-post of a review originally published on April 28, 2015. WH Smith Travel have selected this title as part of their Fresh Talent 2018 campaign, so readers in the UK—or visitors passing through airports and railway stations—have a special opportunity to discover this lively, affecting contemporary Croatian novel. Keep your eye out! It would make an ideal traveling companion.

Everything’s the opposite of what it seems: hell is a comfort to the living, while heaven is ordinary blackmail.

A deeply personal piece of unfinished business draws Dada, the spirited heroine of Farewell, Cowboy, from the towers of Zagreb, back to the grimy streets of her hometown on the shores of the Adriatic in this debut novel from Croatian poet and writer Olja Savičević. Once she arrives, her first task is to relieve her older sister of the responsibility of keeping track of their mother who seems to be surviving on a routine of pharmaceuticals, soap operas and bi-weekly treks to the cemetery to visit the graves of her son and husband. But at the heart of Dada’s return to the Old Settlement is a need to lay to rest her questions surrounding the suicide of her beloved younger brother Daniel several years earlier.

Dada is feisty, in keeping with her fiery hair, an attribute she shared with Daniel and their late father who succumbed to at an early age to asbestos poisoning. An aficionado of the western film, spaghetti and American classics alike, her father spent his final years working at the local movie theatre and then, after the war, in a video store. He bequeathed to his son his love of western heroes and a jammed Colt pistol.

Upon her return to the Old Settlement, Dada settles in to her room under her brother’s fading movie posters, gets an old scooter running and cruises through town on her mission to piece together the past. She recalls the eccentric playmates with whom she roamed the streets and encounters a most beautiful young man who appears and reappears, usually playing a harmonica. Meanwhile it seems that a movie crew has moved in to shoot a film on a drab grassed expanse that will double as the prairie for a project spearheaded by no less than a legend of the bygone era of the spaghetti western.

The primary focus of Dada’s pursuit however, lies closer to home. The family’s neighbour, known to most as Herr Professor, a veterinarian who had befriended Daniel, has resurfaced. After a violent attack triggered by rumours about his sexual proclivities, he had disappeared. Months later, seemingly without warning, 18 year-old Daniel threw himself beneath a speeding express train. Now the old vet has returned. And Dada is certain he holds the key to her brother’s death; in fact she is bitterly obsessed with a desire to confront him, to confirm that he is the author of a cryptic typewritten letter that arrived a few weeks after the funeral, a letter that seemed to indicate that Daniel had been trying to contact the sender. Face to face over cake and brandy she cannot quite say what she wants. She grinds her teeth over his melancholy insistence that “I don’t ask anything of life other than a little radiance.” What on earth is that radiance he asks for, she wonders.

This postwar Balkan world is one of decaying architecture, graffiti scarred walls and woodworm rotted buildings. Tourists are moving in or passing through. Modern technology and old customs exist side by side. Dada is a most engaging heroine, her voice rings through the grime and dust of her environs with a cool crystalline clarity and youthful spirit. For example, after tracking down her former room-mate she recalls that her friend had considered herself the last emo-girl:

‘You’re certainly the oldest emo-girl, and probably the last’, I said.
I imagined her as a little old Gothic lady, but little old ladies, at least the ones here in the Settlement, are generally Gothic in any case, it’s in their dress code.
My room-mate and my Ma would get on well, I reflected. They could go to the graveyard together and shave their heads in keeping with the Weltschmerz.
I’m thinking as though she had settled in my head, I reflected, immediately after, anxiously. I really am my sister’s sister.
Sar-cas-ti-cal-ly, I reflected, in syllables.

Savačević continually surprises with the originality and energy of her prose, translated skillfully by Celia Hawkesworth. Images are revisited, lines repeated, like refrains, throughout the novel, creating a very dynamic and original flow. Tragedy lurks in these pages, but what could be a dismal heartbreaking tale is lifted with humour and thoughtful asides. And that is the sense that lingers. 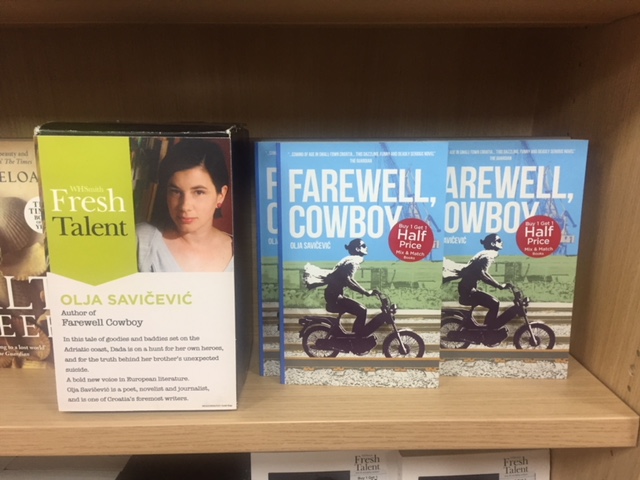 5 thoughts on “Revisiting a past review: A little radiance: Farewell, Cowboy by Olja Savičević”