On the surface, Special Needs by Croatian writer, Lada Vukić, appears to be a simple and straightforward story, told by a boy who does not engage with the world the way others do. He knows he is different. Special. And he does not like it. His classmates taunt him, his teacher barely tolerates him, and his aunt suffers him without affection. His single mother struggles to support the two of them by working as a seamstress for a manipulative, abusive boss, their nosy neighbour is alert to any sign of possible dysfunction, and a small-time drug dealer turns him into an unlikely accomplice. Lots of room for misunderstandings, the wisdom of the innocent, and maybe, if we’re lucky, a happy ending. Except that luck is in short supply for our hero and his mother, intimations of tragedy lie beneath the surface in an intriguing novel that succeeds on the uncommon strength of the perspective through which it unfolds. 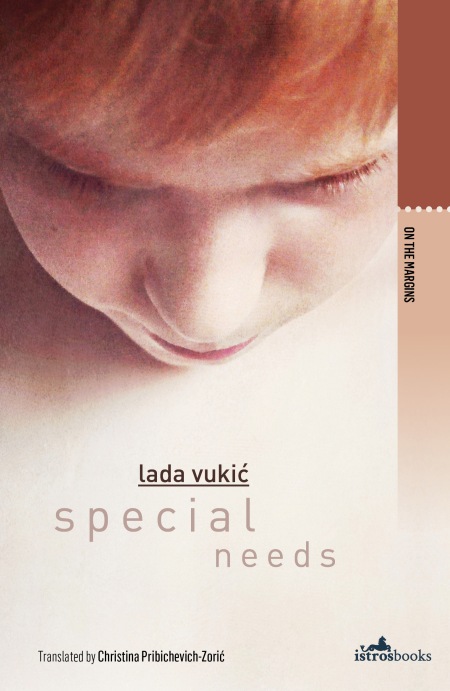 I tend to be skeptical about child narrators who can veer too far toward the irritating or be exceptionally precocious. I am equally wary about narrators with some obvious emotional/cognitive impairment which often is imagined somewhere on the autism spectrum—which, in reality, is a very wide range. Put both together and the results can be a voice that is overly naive or unrealistically charmed. As the parent of two children with learning disabilities, one of whom also has mental health concerns, and as someone who has worked extensively with disabled populations from extreme physical and developmental disabilities to mental illness to a great variety of adult acquired brain injuries, I opened Special Needs with curious caution. And was immediately drawn to the narrative voice.

Born with an unspecified disability that others allude to but never name in his presence, ten year-old Emil is a selectively mute child with some deformation or inflexibility in his hands and feet. His reasoning is highly logical but on his own unique scale of understanding, to the point that he appears to others far less intelligent and intuitive than he is. The fact that words so often freeze in his mouth, adds to this perception. He believes he has problems with abstract thinking but rather he seems to lack a certain flexibility in some areas and an idiosyncratic frame of reference in others, often linked to his love of nature programing on television and an almost magical level of auditory acuity only his mother understands. He engages in some ritualistic behaviours and has an aversion to being touched. This cluster of qualities may or may not conform to any typical diagnosis but, if you work or live with disability, you know that there is no such thing as “typical,” or rather typically atypical. From Emil’s point of view, he is used to people failing to understand him, it’s a frustration he is quite capable of articulating if not verbally expressing. But what he really longs to do more than anything is shed the heavy corrective shoes he is forced to wear, get a pair of trainers, and run. That is the dream he holds to.

You can’t buy my shoes in a shop. They’re not displayed in the shop window like other shoes. And they don’t have the logo of a famous brand. I get them from Uncle Mario. So, no Nikes, no Adidas, just – Uncle Mario. Who wants shoes called Uncle Mario? I mean, nobody normal. And I’m normal, though sometimes they say I’m not. First, he makes an imprint of my feet, which are then used to make the shoes. I’ve seen that he does the same with others, so I’m not the only one. There are others like me, with special feet. But that doesn’t mean anything to me because I don’t like being special. I want to be ordinary.

Life is difficult for Emil and his mother. He is teased at school and unable to perform as expected by his teacher. The only subject he really enjoys and in which he demonstrates an uncanny, if pragmatic, understanding is religious studies—a class he is only allowed to attend as a viewer. His mother is a woman whose faith, if she ever had any, has been tried and found wanting. She colourfully expresses her anger at the school’s lack of patience and appreciation of her son, but she is unable to afford any supports for him, has lost the natural social network she once enjoyed, and gets no empathy from her bitter, intolerant sister:

Auntie Zrinka told mum that she had only herself to blame for the situation she found herself in. No, nobody else was to blame, just her! What was happening to her now was the consequences of past mistakes. What mistakes? Clearly, those when she should have gotten rid of me in time. (?!) Alright, she saw that the words “get rid of” were too strong, what she meant was some sort of institution for children like me. (?!) And yes, how many times did she have to tell her that she was stupid because she wasn’t even asking the boy’s father for child support. (!?)

Emil’s super hearing allows him to eavesdrop on conversations he is not meant to hear, nor fully equipped to understand. He tries to connect the nonsensical facts as best he can. The larger implications are apparent to us as readers, but many details are left out. An incompleteness is allowed. Emil draws his conclusions, we draw ours. He is also granted, by virtue of his hypersensitive ears, an ability to hear the hearts of others crashing around in their chests in times of fear or excitement, and when he confesses that he has detected a second faint heartbeat in both his mother and his teacher, he inadvertently tosses a wrench into several lives at once. Emil’s extra-special special needs add an important quality that enhances the appeal of the story without reducing the reality of challenging circumstances and disadvantages that he and his mother face. Nor will it help avert tragedy.

Special Needs’ true strength is the tightly controlled narrative, preserved beautifully in Christina Pribichevich-Zorić’s confident translation. Vukić never loses the voice of her young protagonist, maintaining the authenticity and appeal of Emil and his uniquely matter-of-fact worldview, while letting his self-awareness to begin to slowly evolve as the story turns in an unexpected direction. This work, her first, which won the V.B.Z. award as the best unpublished novel of 2016, is steady, strong, and a subtly different take on the exceptional child narrator, one that may be of particular interest to those who have spent time with the extraordinary ordinary people who see the world in a way that exposes truths we so often pretend to ignore.

Special Needs by Lada Vukić is translated from the Croatian by Christina Pribichevich-Zorić and published by Istros Books.