Mother bore the babe in the white moon,
In the shadow of the walnuts, ancient elderberry,
Drunk on poppy juice, the lament of the thrush;
And silently
A bearded face bows with compassion over her

Quietly in the dark of the window; and the old chattel
Of ancestors
Lay broken up; love and autumn reverie. 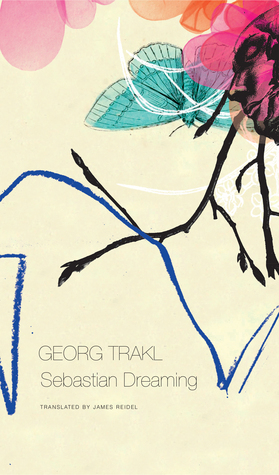 So begins “Sebastian Dreaming”, the centre piece of the second and final collection of poems prepared for publication by Georg Trakl during his lifetime. His first collection, Poems (Gedichte) had been published to warm reception in 1913, but, one year later as he was awaiting the release of this volume, he received word that the war would indefinitely delay all further publications. It is thought that this news, in conjunction with the mental and emotional stress he suffered working in the dire conditions of a wartime military hospital, contributed to his early demise. On November 3, 1914, he was found dead of a cocaine overdose. He was twenty-seven years old.

Sebastian Dreaming (Sebastian im Traum), represents the second book of Our Trakl, a three part series of new translations of Trakl’s complete works by American poet and translator James Reidel. Recently released by Seagull Books, this volume joins Poems, which was published in 2015. True to form it is finely crafted and beautifully presented. Although the poems here have appeared in other compilations, and editions of selected works, Reidel contends that this book deserves to be read, as Trakl intended, as a single volume. As with Poems, the reader is invited to spend time with the work as a whole, to engage with Trakl’s fractured, dream-like vision.

In an earlier review of the first volume of this series, I traced an overview of Trakl’s life and included links to Reidel’s essay about this project in the journal Mudlark. The elements of Trakl’s poetry, and the challenges facing the translator, are perhaps even more strikingly evident in this book. The motifs that dominate his first collection – rural landscape, nature, colour, signs of life, images of death and the abiding presence of his beloved sister Grete – are all here, but there is a more restrained and disjointed feel to many of the pieces. This reflects, according to Reidel, Trakl’s continuous efforts to try to pluck poems out of his experience, efforts that fall apart and lead him to return to the same images and motifs repeatedly:

“Indeed, translating him is like finding ones footing on the blue glass mountain of fairy tales—with Grete the princess within. The great irony, for me, is that the constant improvements, revisions, and corrections are in keeping with Trakl’s method, with all his obsessive autumns, black birds, neologisms—and in that same spirit—his Schwesterei, his sistering his poems, his madness, decay, and constant sense of downfall and sunset and the like. There is in Trakl a constant reworking, a constant revisit to the same forest, to see the same blue deer, and so on, to the same working poems to see them in the right light, or, more often, the right gloom.”

As a reader coming to this work, I am neither inclined nor qualified to enter into a critical assessment of Sebastian Dreaming or the translation at hand. Other translations of Trakl’s poetry are available and I do not believe that any one translation is superior to another, especially with poetry, although readers, with or without an ability to approach the work in the original, are bound to have preferences. The first version of a piece encountered? The one that sounds most pleasing in English? The translation that is most exacting in content and form to the German?

As noted in my earlier review of Poems, Reidel indicated in his introduction to that volume that his intention is to try to capture Trakl in a sense that would be as close as possible to the experience of the original reading, keeping in mind the time and the influences that would have shaped his work. As he explains, “I want to actually channel Trakl, his craft (with its implicit painterliness) and work ethic, to have him, so to speak, absorbed in the right dosages he – as a poet, pharmacist and addict – intended.” The care and sensitivity Reidel has brought to his work comes through, touching the reader across the century that has passed since the poet’s death.

Sebastian Dreaming is divided into five sections. The final part, consisting of one longer, magnificent prose poem, “Dream and Benightment” (previously translated as “Dream and Derangement”) stands as my personal favourite, given my current fondness and attraction to the form. It is an intense and powerful piece:

Hate scorched his heart, lust. Then he stepped into the green of the summer garden in the guise of a silent child, in whom he recognized his benighted face shining. Woe the evening at the window, when a grey skeleton emerged from crimson flowers, death. O, you towers and bells; and the shadows of the night fell upon him as a stone.

The poems in this book are charged, if possible, with a more sombre atmosphere than his earlier collection. The sadness comes through clearly and lingers. The recurring themes are visited from varying angles and directions. One can sense the poet trying to focus his vision while over it all hangs the eerie premonition of death that will soon be freed from the pages and realized by the increasingly discouraged and depressed writer.

I will leave you with a complete taste from this collection, in the form of this striking, spare poem:

Shepherds buried the sun in the leafless forest.
A fisherman pulled
The moon from the freezing pond in a net of hair.

In the blue crystal
Lives the pale man whose cheek rests against his stars;
Or he nods his head in crimson sleep.

Yet the black flight of the birds always stirs
The beholder, the saint of blue flowers,
The stillness near recalls forgotten things, extinguished angels.

Once more the brow nights over the lunar stone;
A shining boy
The sister appears in autumn and black corruption.

11 thoughts on “Peace for the soul: Sebastian Dreaming by Georg Trakl”