is there a zone of darkness between all languages,
a black river that swallows words
and stories and transforms them?
here sentences must disrobe,
begin to roam, learn to swim,
not lose the memory that nests in
their bodies, a secret nucleus.

Maja Haderlap was born Carinthia, the southern-most province of Austria, into the Slovenian-speaking minority community that served in the resistance against the Nazis during the Second World War. As a result, they suffered repression during the war and ongoing persecution in the decades that followed. Haderlap was raised in this hostile borderland environment and educated in both Slovenian and German, two languages burdened with conflicting histories and dynamics in the region. She first established herself as a poet with several Slovenian-language collections before releasing, at the age of fifty, her acclaimed German-language novel, Angel of Oblivion. According to her translator, Tess Lewis, her decision to write about her family and community history in German, was controversial, but guided by a desire to reach as wide an audience as possible with a story that was largely ignored or unknown. Now, with distant transit, she has returned to poetry, but, for the first time, through the medium of her second language. 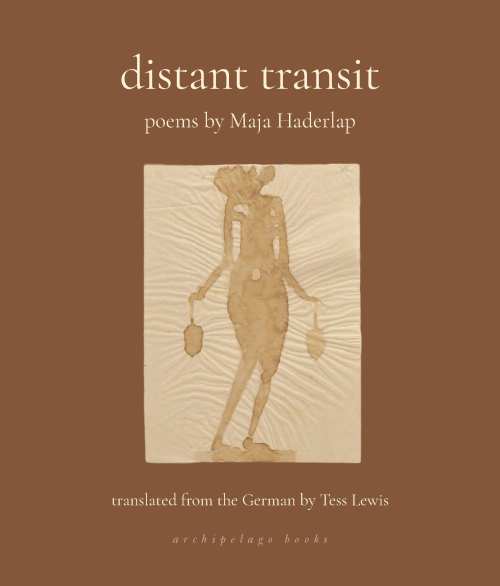 The fact that these poems were composed and published in German adds an extra layer to the themes Haderlap explores. Language and the translation of identity and self-understanding inform the poet’s reflections on home, relationships, and belonging—experiences grounded in her Slovenian culture and heritage, but examined through German and all that that language has afforded her beyond her rural roots. The tension between the two forms of expression comes through in Lewis’ perceptive translation, heightening the emotional impact of this work.

Haderlap’s poetic diction and simple, lowercase form, reward careful engagement. I found that the style encourages a close reading to follow the rhythm and the division of thoughts or sentences. Her imagery is rich, inspired by the natural beauty of her native countryside, yet filled with longing and questioning. Language is an ever present element—what does it contain, preserve and lose as one grows and moves between vocabularies and grammars? And what does it mean to be at home in any one place or community?

.                                  language opens
rotted doors, thrusts the dusty boards
from their brackets, reveals the buried stone.
it flies at my face like a flock of startled
swallows, confronts me as the smell of mold,
drops from the jagged armor and
hulls of kids’ stuff like silt shed from all that was.
as soon as its bird heart beats calmly,
it shows its skin, appears unscathed and
hardly used. keep me safe, language,
wall me off against time.

This collection is steeped in the landscape and mythologies of Haderlap’s Slovenian youth, carrying that foundation into adulthood in an evolving relationship with language—hoping and trusting words to carry memories forth into another time and tongue. It is an uncertain faith. Yet her poetry so vividly captures the possibilities and limitations of translation, that I would suggest that one does not need to likewise live between two languages to recognize the nature of the dilemma. Any one of us who trusts our own memories, emotions and experiences to the vagaries of words—even if in our sole language—worries those same words onto the page. The writer is always recognizing the permeability of the borders and boundaries within their own experiences, translating and transcribing themselves into being, seeking to find preservation and refuge in words. Haderlap speaks to this so acutely.

the shore path is now built up, shifted,
torn out of the meadow and discarded.
i, too, have emerged repeatedly
as a translation of myself,
transferred and rewritten
i appear in a new transcription
although in similar form.

(from “on the shore path in the evening light”)

The poems that comprise distant transit speak to a personal political reality in intimate, yet recognizable terms, echoing the transitions we all experience as we grow into adulthood, away from home and search to find ourselves in the world. More specifically and powerfully though, Haderlap animates the mystery, power and baggage that a language can carry with it, how words and sentences are laden with implications for understanding the past and the present, to articulate one’s identity as an individual torn between two tongues.

distant transit by Maja Haderlap is translated from the German by Tess Lewis and published by Archipelago Books.