Alexandria’s aging buildings sagged into one another, yellowed and peeling. They were set back from the road on ether side, and between them lay a great network of streetcar lines, crossing and recrossing like a tracery of veins. Bahr picked up a path through the tracks, and cautiously I followed. I followed him over rail after rail, while he kept his gaze fixed on the ground as though trying to marry a memory to what he saw.

Suddenly, he stopped, whispered, “Here!” and tugged at me so that I was standing upright, directly behind him. Then I heard it, the distant but distinctive metallic tick of streetcar wheels approaching, and as that grew louder, an identical ticking, echoing the first, started to close in from somewhere behind us.

The most important thing you need to know before entering the slippery, shifting world of Mohamed Kheir’s novel Slipping—his second published but first translated into English—is that it is, in the words of translator Robin Moger, “a book about not knowing what’s going on.” If you are the type of reader who feels most comfortable when you have, or at least believe you have, a firm grasp on what is happening and where you are going beware that, in the world Kheir invites you into, reality is an uncertain quantity from the opening pages through to the final chapters where some threads are picked up in unexpected ways while others, even the ones that felt most secure, are loosened, untied, rewound. But if you are open to a book that, to quote Moger again, “teaches you how to read it,” Slipping is an exhilarating journey into a fragmented, dreamlike vision of Egypt in the wake of the Arab Spring. 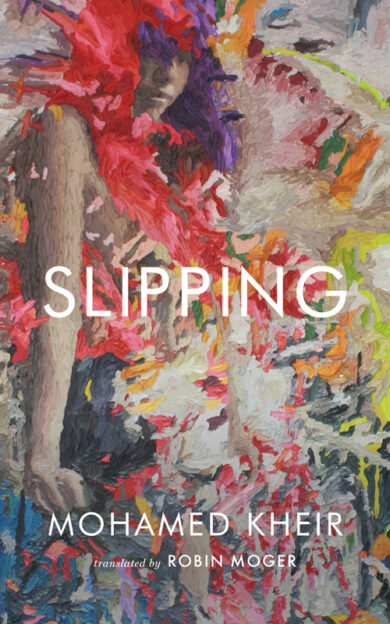 The opening chapters unfold like a series of unfinished vignettes as new characters and scenarios are introduced only to disappear, not resurfacing until much later as the narrative is building toward a close. The overall effect is similar to a nested narrative, but with an amorphous, magical quality that burs the edges of the experience throughout. I was inclined to take careful notes at the beginning, like leaving a trail of bread crumbs, a practice I soon abandoned. Likewise I have noticed that other reviewers have taken pains to sketch the initial “unfinished” stories, only to slip ahead to the end to indicate how the thread is picked up. That creates a spoiler effect of sorts, in so much as one can “spoil” a book that leaves many questions unanswered even after the final page is finished. But for a novel filled with ghosts, disappearances, magic and mystery it is strangely fitting—especially because painfully real circumstances like protests that turn into riots, police brutality, mass migration and exile, ground this alternate-Egypt in the harsh realities of a recent past.

The core narrative driving Slipping is revealed gradually. The first chapter introduces Ahmed, a young man whose deceased father holds a commanding presence over his household from beyond the grave, informing his wife and son how he wants things done—even what he wants to have prepared for dinner. Other early chapters entertain the unusual predicaments of a waylaid bridegroom, a doctor, a singer and other individuals and communities. The only recurring figures are Bahr, an old, almost ageless man who has returned to Egypt after many years of exile with a mission to revisit a number of mysterious locations, and Seif, the journalist who has been assigned to accompany him and report on his observations. Their adventures, as narrated by Seif, first appear as alternate chapters before coming to carry the flow of the central portion of the book.

Together they visit spaces where reality intersects with the unexpected, such as the “safe point” in the railyard described above where two ancient streetcars pass within inches of where they are standing or a location where for a brief time each day the level of the Nile drops to a few inches, allowing transit from one side to another, or a neighbourhood in Cairo where the risk of falling corpse flowers keeps the streets quiet or an abandoned village emptied when the residents decided to travel north by boat in search of a better life on another continent. Seif’s account is not chronological or even entirely clear or consistent. Amid the details of the strange places his companion leads him to, he weaves memories of his lost lover, Alya, an enigmatic and gifted woman with an uncanny ability to sing any sound—the sea, the rain, the wind—and Bahr’s own stories of his life in Egypt and abroad.

Both men’s lives have been personally impacted by protests and political violence and their country is, as they piece their way through it, distorted in the aftermath of the Arab Spring. Likewise, the protagonists of the other various storylines also find themselves in a world at once peopled by ghosts and caught within an increasingly surreal bureaucratic nightmare. As the book’s final sections near, earlier stories approach apparent conclusions that seem to raise further possibilities, while what we think we understand of Seif and Bahr’s journey becomes less clear. Slipping, is a work that seamlessly slips between tales, weaving a mesmerizing blend of magic and mystery to craft a fable resting on a foundation of unpleasant truths that leaves much to ponder.

Slipping by Mohamed Kheir is translated from the Arabic by Robin Moger and published by Two Line Press.