The loss, he says, the loss of someone so
close, the loss of a HAND and HEART
PARTNER is something so completely and
utterly devastating, yet it may be, we may be
able to keep right on speaking with this HEART and
LOVE PARTNER continue conversing and may
even expect a response from this person.

I’ve long had an interest in literary expressions of immediate grief, a much more elusive task than one might imagine until actually faced with the intensity of loss and the longing to express that experience at its most raw. Then it seems almost impossible, yet Friederike Mayröcker’s Requiem for Ernst Jandl may be one of the most successful unmediated responses to the loss of a loved one that I have encountered. 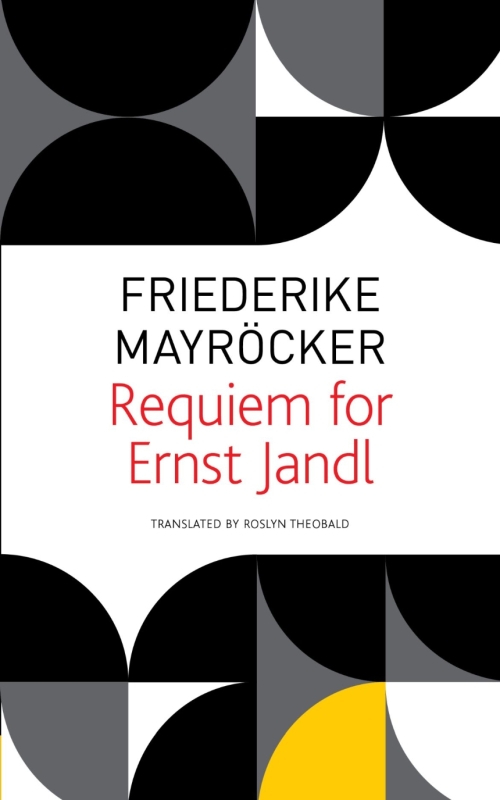 Mayröcker met fellow Austrian poet and writer Ernst Jandl in 1954. They both left marriages to be together, but did not marry or share a home. Theirs was a deeply creative lifelong partnership, they supported one another’s work and collaborated on radio plays and other projects over the next forty-six years. When Jandl died on June 9, 2000, she was devastated by the loss yet miraculously she was able to channel it into a series of poems composed within the first months after his death. The rawness and confusion of grief is evident. Her characteristic, experimental style which employs capitalization, italics and numerals, and often incorporates fragments of private conversations and excerpts from letters and diaries, serves to heighten the anxiety, confusion and emotion of this period of early grief. Also woven into the series of poems that comprise this requiem is an earlier piece that captures the nature of the interplay of the their creative energies.

There is a sense throughout this slender collection of words and emotion spilling out on the page, gathered up and coming loose again. The great love, the completeness of the loss, and the exhaustion of caring for a weak and dying man all have to be released, repeatedly, in the tumult of grief and guilt that colours these early months. Each poem approaches these conflicts, but the final long piece in the book, the prose poem “’the days of wine and roses’, for Ernst Jandl,” reflects this emotional urgency with particular power. Here Mayröcker seems to be sorting out a flux of memories, thoughts and feelings as expressed to a friend, Leo N.

And what about the pencil, I say to B., why
on the morning of his death did he draw a
pencil on a piece of note paper, I say to B.,
why did he ask for a pencil, there were
plenty of pens on the little table next to his
bed, the quill of the Holy Ghost lingered
longer on Job’s sorrows than it did on the
delights of Solomon, B. says, I tell Leo N.,
is he really gone, is he really in heaven now,
a heaven you yourself believe in, the
passageway into the other world, says Leo
N., is described as stepping through a
waterfall, and the vulture flies through the
sun, I went up to his room, up to a bed that is
empty and say to him I feel better today, but
I am thinking: I NO LONGER have any hope
for this life, at 3 o’clock in the morning…

In the crush of the weeks and months following Jandl’s death the voices of some friends and phone calls from others rise and fall. This is a loss both deeply personal and shared with a community of artists, and at times a tension is evident, one senses that the poet both welcomes the company and wants to be alone. Needs the comfort and doesn’t know what to do with it.

Of course, the death of her companion and creative partner did not silence Mayröcker. She continued to write startling, challenging and innovative poetry and prose right up until her death last year at the age of ninety-six. Jandl continues to appear and inspire along the way but never in such an open, unabashed lament as in this Requiem—one that fittingly closes with one of his best known poems, the humorous sound poem ottos mops complete with Mayröcker’s original reflection on the composition written in 1976, long ago she admits, adding that if she could have one single year from that now distant time back, “how intensively I would live it, how tenderly and how happily.”

Requiem for Ernst Jandl by Friederike Mayröcker is translated from the German by Roslyn Theobald and published by Seagull Books.