It begins as it ends. With a beam, a rope, a chair and a window looking out on a hill, a cypress tree and a potato field. With a heart turned to stone through so many trials.

In her stark, poetic elegy The Last Days of Mandelstam, Lebanese-French poet and writer, Vénus Khoury-Ghata, aimed to bear witness to the final days and hours of Osip Mandelstam’s life that had passed unrecorded in a transit camp near Vladivostok, alternating between the dying poet’s feverish thoughts and delusions and delicately sketched moments from his past. With Marina Tsvetaeva: To Die in Yelabuga, she again begins with the final hours of another great Russian poet whose work was supressed during her lifetime, but her approach here is more direct. Woman to woman, poet to poet, Khoury-Ghata wants to trace the long, troubled journey that led Tsvetaeva to take her own life in 1941 at the age of forty-eight:

Hunched over your huge 750-page journal for months, I try to assemble the scattered pieces of your life, understand the reasons for your infatuations and your disappointments, especially your frantic desire to connect with men, women (some loved with words, others with hands) before you ended up alone, destroyed, bitter, unrepentant, ready to begin again.

Addressing her subject directly, Khoury-Ghata paints a spare, unsentimental portrait of a complicated, gifted woman whose creative intensity and constant need to be loved not only attracted but suffocated those around her. It is an effort to understand her demons and her pain. 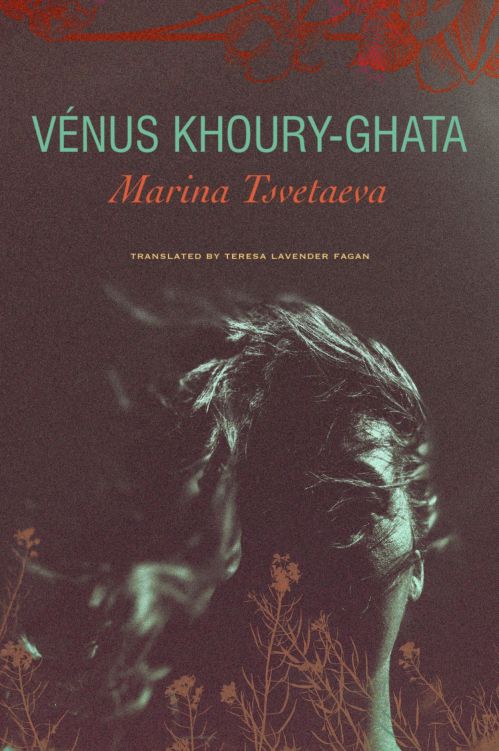 Born into privilege, the daughter of a friend of the tsar who founded the Moscow Fine Arts Museum, Marina Tsvetaeva was a prodigy, studying music and French as a child, and publishing her first collection of poetry at age seventeen. She was soon drawn into literary circles where, through critic Max Voloshin, she met Sergei Efron whom she would marry in early 1912. Later that year, she gave birth to her first child, Ariandna (called Alya) just before her twentieth birthday. Her fame as a poet grew over the following years with the publication of further collections. Then, with the October Revolution, her fortunes rapidly began to unravel.

You had to learn how to live humbly, become invisible, not attract attention, expect at any moment to be denounced, arrested, deported shot.

As her late father’s connections become a liability and her husband joins the counter-revolutionary White Army, Tsvetaeva is reduced to begging from friends and struggling to get by, now with two children to support. She finds creative expression through writing plays and physical expression with lovers, but she allows her youngest daughter Irina to die of starvation at an orphanage where she had taken her girls in the hope that they would be fed. Her death is one of the many ill-fated decisions and situations that will haunt her.

Khoury-Ghata follows Tsvetaeva’s escape from the USSR to Berlin in 1922 where she plans to meet up with her husband whom she has learned is alive and studying in Prague. She falls in love while waiting, as is her nature, an act that never seems immoral to her, simply an outlet for the many passions that course through her being. When she and Alya, finally reunited with Sergei, settle near Prague, a new lover, her husband’s friend Konstantin Rodzevich, occupies her day, while writing commands the nighttime hours:

In the evening after supper, only the scratching of your pen on paper can be heard. Your fierce writing coupled with the desire to destroy what you have just written. Alya and Sergei, powerless spectators of your self-destruction. They watch you racing to the abyss but do nothing to stop you. The involuntary tear that you believe you wiped from the corner of your eye dilutes a word in passing. No tenderness for yourself. The horror is behind you.

In 1925, her son Gregory (known as Mur), in Tsvetaeva’s imagination the product of three men—her husband, her lover, and her great, impossible love Boris Pasternak—is born. Later that year the family leaves for France where she will live for more than thirteen years before finally returning to the USSR in 1939. New loves, including an passionate correspondence with Rilke, follow along with important literary output, but, over the years, continued economic strife will drive the Efron family into increasingly desperate situations. When she is unable to find a market for her poetry, Tsvetaeva reluctantly turns her hand to prose. Sergei, and ultimately Alya, who is often treated little better than a servant by her mercurial mother, become more politically engaged. It is impossible to feel safe and settled. The poet, so highly lauded in her teens, so desired by countless friends and lovers, finds herself alone and unloved. Most painfully, her long time supporter, yet elusive love object, Pasternak, is now lost in a new life as father and husband and no longer has time for her letters:

Pasternak has taken back the only gift he ever gave you: exaltation.

You blame your despair on everything around you.

The mirror above the sink is responsible for your wrinkles.

Too narrow, the worktable is guilty of drying up your inspiration.

Too noisy, your neighbours prevent you from concentrating.

Volatile, dynamic and passionate, the woman who comes to light in these pages is hopelessly dependent on the praise of others. She knows that she is not well liked among her fellow ex-pats, she has no qualms about engaging in romantic activities outside her marriage but is shocked and unsettled when she learns Sergei is contemplating divorce. Both her children come to lose patience with her; over time others learn to either humour or avoid her. Yet as with similar human emotional whirlpools, the one she ends up hurting the most is herself.

Khoury-Ghata’s Marina Tsvetaeva is not a strictly chronological account. Although she traces the general course of the journey that leads to the chair, rope and attic window in Yelabuga, because she is addressing her subject intimately, like a respected correspondent, a friend even, time is porous. Thus, a circle of Tsvetaeva’s friends, lovers, fellow poets and their assorted, often tragic, fates are recurring ghosts, living and dead, that delight, distract and trouble her throughout her life right up to that key final moment that is always present in the interrogatory second person narrative. Pasternak, Mandelstam, Mayahovsky, Biely, Akhmatova and more. Fragments of poems, letters and diary entries offer brief insight into the heart and mind of a woman who would come to be known as one of the greatest Russian poets of the twentieth century, whose life sadly coincided with a dramatically turbulent time that was not made for her.

Marina Tsvetaeva: To Die in Yelabuga by Vénus Khoury-Ghata is translated from the French by Teresa Lavender-Fagan and published by Seagull Books.

The premise is very simple. It is December 1938. As the year draws to a close, Russian poet Osip Mandelstam lies on the very edge of death in a transit camp near Vladivostok. There he will die, far from his beloved Moscow, away from the friends who have either abandoned him or confronted their own tragic circumstances, and separated from his devoted wife Nadezhda. His body will be tossed into a mass grave. Yet, the final days of this man who stood by the power of the word and the primacy of poetry remain unrecorded, lost to time. This slender volume, The Last Days of Mandelstam, sets out to address this silence, to bear poetic witness. 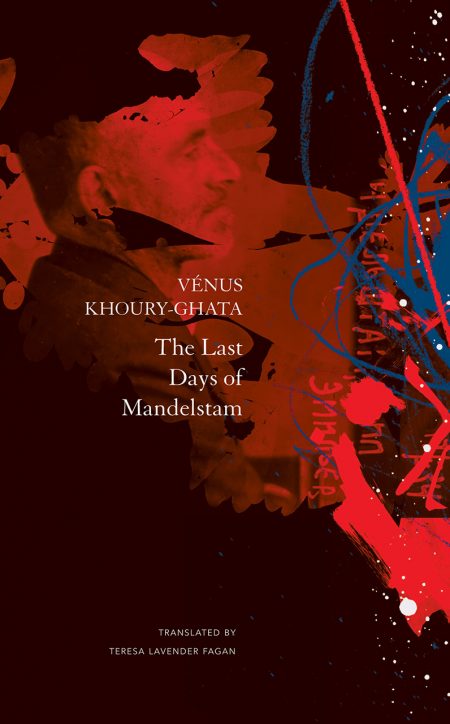 Such a project is, by its nature, a delicate task. It calls for the right touch—the appropriate sense of drama—for it is probable that the waning conscious hours of a man as desperately diminished by typhoid fever as Mandelstam would have been occupied by memories, dreams, hallucinations and brief moments of awareness. At least that is the way that French-Lebanese poet Vénus Khoury-Ghata imagines them in this haunting novella, originally published in French in 2016 and now available in English, in a sensitive translation by Teresa Lavender Fagan.

Lying for months—how many?—on a wooden plank, his mattress, Mandelstam wonders if he is dead or still alive.

After the first month he stopped counting.

Less ill than he, his neighbours might let him know if he is still alive.

But typhus is decimating the camp.

Three out of four deportees are stricken.

The opening passages offer a clear, unsentimental portrait of a man who knows his end is near. Unable to speak, beyond hunger, he listens to his struggling heart. His conscious thoughts are vaguely aware of the present, but more often tangled in the past. His nightmares and hallucinations are dominated by the figure of Joseph Stalin who stalks, taunts, and berates him, echoing, in the process, some of the regrets and doubts that may have plagued the dying poet himself. In our dreams, the monsters we face reflect our own fears. Two lines from (the original version of) Mandelstam’s infamous satirical poem known as the “Stalin Epigram”—All we hear is the Kremlin mountaineer / The murderer and the peasant slayer—form a kind of subconscious refrain that surfaces throughout the book.

The poet on his meagre deathbed serves as the fulcrum around which the narrative turns, reaching back into his earlier life and, on occasion looking ahead, years beyond his death. As expected, the story that emerges is a sombre one, a tale of exile, poverty and disgrace into which threads drawn from the lives of Mandelstam’s fellow poets and his fellow transit camp prisoners are woven. Carefully chosen vignettes, repeated images—worn-out coat, moth-eaten blanket, boots made from old luggage—together with the choice of present tense and a strong poetic sensibility combine to create a moving tribute to a man who held to poetry and his principles in the face of unspeakable cruelty.

As the narrative moves between the dying poet’s thoughts and delusions and moments from his past, Khoury-Ghata sketches scenes punctuated by strong images. The years Mandelstam and his wife spent in Voronezh after he was banned from Moscow in 1934, are especially poignant. There they share a noisy communal apartment with several families; to find creative space Mandelstam takes to the icy streets:

The sound of the poem composed in the dark the same as that of his shoes crunching in the snow. A suctioning sound, the cold and the words are sucking his energy.

He returns exhausted from his wanderings, and joins Nadezhda under their moth-eaten blanket, reciting the poem written in his head. Nadezhda collects the words like breadcrumbs from a feast, transcribes them, waits for daylight to distribute them among the trustworthy.

Poetry is, of course, the crime that sentences Mandelstam to his fate. Poetry is his weapon against Stalin. As such, fragments from his poems and from Nadezhda’s memoir are incorporated into the text. Anna Akhmatova, Marina Tsvetaeva, and, as a later admirer, Paul Celan also make poetic contributions. Countless artists and intellectuals faced similar persecution under the regime, but this is a story about the power of the poem.

The Last Days of Mandelstam is, for its difficult material, a finely rendered work. Neither morbid nor maudlin, it holds to a tight emotional course as the narrative repeatedly laps at the shore of Mandelstam’s death—imagined, dreamed and finally realized—a quiet passing likely unnoticed for a time. The dramatic energy is sustained, the sparseness of the account gives the sorrow breathing room, and, in the end, Mandelstam’s troubled life is granted the dignity it deserves. A sad, but beautiful book. One that makes you want to return to his poetry, to allow him to continue to live for you again and again.

The Last Days of Mandelstam by Vénus Khoury-Ghata is translated by Teresa Lavender Fagan and published by Seagull Books.